The Hidden Corners of Mexico City

See the beauty of the the less-well-known side of Mexico City through the eyes of expert guide Felix.

Secret saints and a palace of postcards: the hidden corners of Mexico City

Mexico City is an extraordinary place. A vast metropolis, one of the largest cities in the world that still feels like it is bursting at the seams. It is a city full of life, of moving parts, and with something new always happening around every corner.

For a place so rich in history, culture and extraordinarily beautiful sights, Mexico City remains bafflingly underrated as a destination for travelers and tourists. Granted, it is a world away from the traditional Mexican holiday attractions of sun, surf and sea, and it certainly has a gritty, edgy quality in places, but for me this just adds to the charm. Most importantly, it wears its fascinating past and bold, vibrant present proudly on its sleeve, and offers a treasure trove of amazing architecture and stunning historical sights.

I’ve lived in Mexico City for a year now, and I am still finding new pockets of interest and hidden gems every time I set foot into town. The main attractions of the city are marvelous, and it would be unthinkable to visit without taking in the big names. The grandeur of the Zocalo, the wonderful blend of Neoclassic, Baroque and Renaissance architecture found in the Metropolitan Cathedral, and the darker, more ancient beauty of the Templo Mayor are all musts for any itinerary.

However the true nature of the city is found not in its well-known attractions, but in the more esoteric and overlooked places, corners of the city that might not even be on the map, or that do not leap out from a guide book, demanding to be visited. These hidden gems are far more reflective of the city’s character, and tell a far more authentic and vivid story of its history.

A surprising meeting of Mexico and Maronite

If you will indulge me a little, I will take you on a tour of some of my favorite spots in Mexico City, and try and explain how they have molded my impressions of this fascinating, chaotic and exciting place.

On my first visit to Mexico City, before I moved here, I was taken for a walk around the center of town by my partner’s mother. Her English was superior to my Spanish, and although neither of us were really accomplished in the other’s language, we bumbled along quite nicely. Having explained to her my interest in religious history, at one point along the way she indicated that I might like to see a church on this particular street, which I was all in favor of. 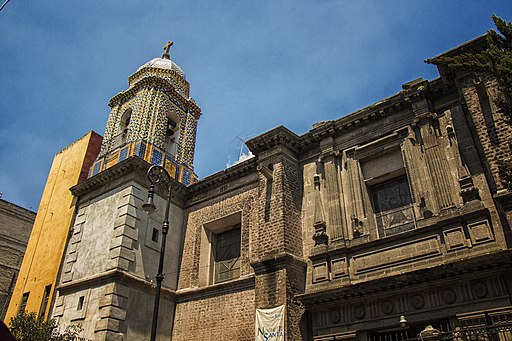 We stepped through a reasonably unprepossessing doorway, and I was immediately struck by a sense of divergence, of something not quite adding up to my expectations. This was far from the Latin Catholic church I had envisaged, with statues of brown-cowled, hooded monks with long, grey beards. Instead, it was decorated in a way that conjured up memories of visits to Athens, Istanbul and Beirut, rather than Mexico. A little further investigation revealed that my hunch had been correct, and that this was a Maronite church, a small Catholic sect I was unaware had any following outside Lebanon and the Middle East.The Cathedral of Our Lady of Valvanera was my first introduction to the Lebanese community in Mexico, but not my last. The history of the Lebanese in Mexico is long and fascinating, starting in 1892 on board French merchant ships, through the 1930s, to those fleeing the Israel-Lebanon conflict of 1948 and the Six Day War. Lebanese culture has become intertwined with that of Mexico, evidenced most starkly with the ubiquitous taco al pastor, the Mexified descendent of the schwarma or doner kebab.

The Maronite cathedral is not the only tangible evidence of Lebanon’s influence on the religious life of Mexico City. The Cathedral of Porta Coeli or the Church of the Gate of Heaven is just as interesting, part of the Greek-Melkite, or Byzantine rite, and perhaps even more beautiful for the visitor. It is filled wall to wall with truly glorious Byzantine images in gold and blue, while the names on the dedications point to the congregation’s Eastern provenance.

Next up is a temple of a different kind, dedicated not to God, but to Progress, and particularly to The Post. The Palacio Postal, or Palacio de Correos is the kind of place that would be a tourist centerpiece in any other place, but in Mexico City its splendor is treated with pure pragmatism by locals, and is oddly overlooked by visitors.

Designed over a century ago by architect Adamo Boari, who was also responsible for the more renowned Bellas Artes, the Palacio Postal is a jaw-droppingly beautiful vision of gold lattice, ornamental columns and intricate stonework. It rather defies stylistic description beyond ‘eclectic’, with glimpses of Rococo, Art Nouveau, Baroque, Neoclassical, Moorish, and both Renaissance and Gothic Revival. What is certain is that the interior of the building, which still functions as a working post office, offers a grace and elegance that is rarely seen in civic buildings today. 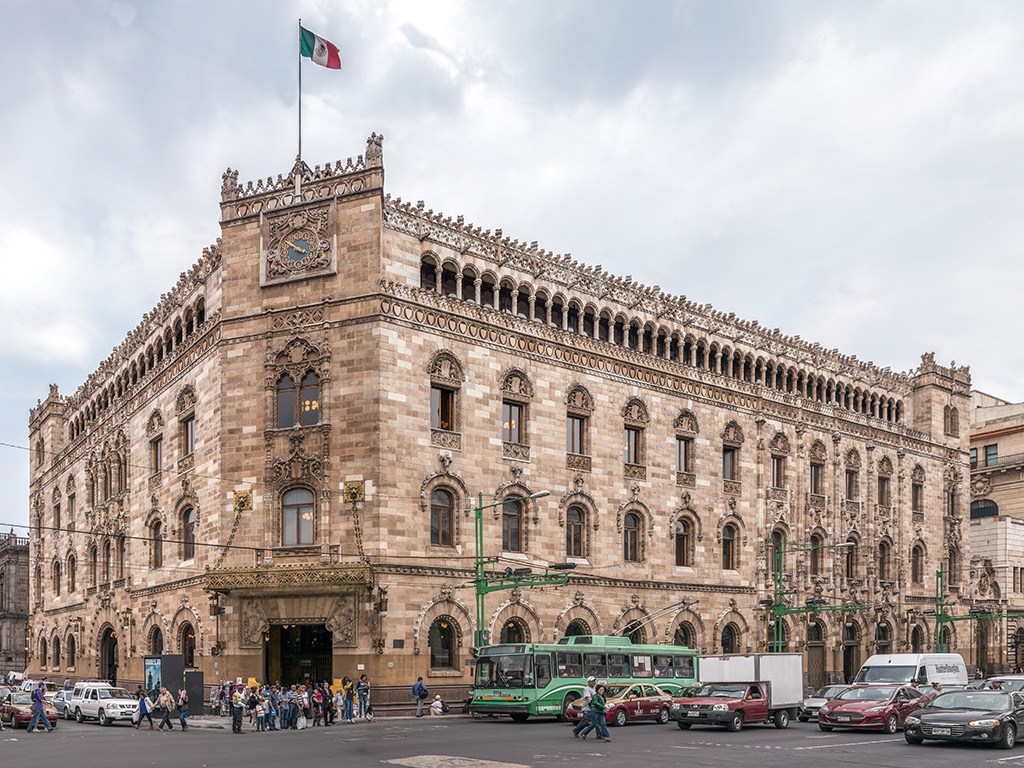 The Palacio Postal was part of the burst of growth during the Porfiriato, the period of enforced ‘order and progress’ under President Porfirio Diaz at the turn of the 20th century. This was a time of huge developments in industry and technology, as well as increasing sophistication of the Mexican upper classes, with style and culture firmly taking its cue from Europe, and France in particular. The Palacio Postal is, to my mind, a tangible avatar of the combination of elegance and progress, and a genuine Cathedral of Communication, a temple to the technological developments of the time. 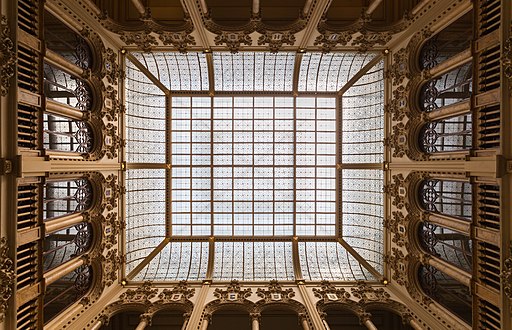 Ironically, it also stands as a symbol of much of what energised the opposition to Diaz’s regime which formed a large part of the Mexican Revolution. Progress, elegance and sophistication for elites only, with campesinos and labourers overlooked and oppressed. It remains a stunning place to visit, and arguably the most beautiful place to send a postcard from in the world! 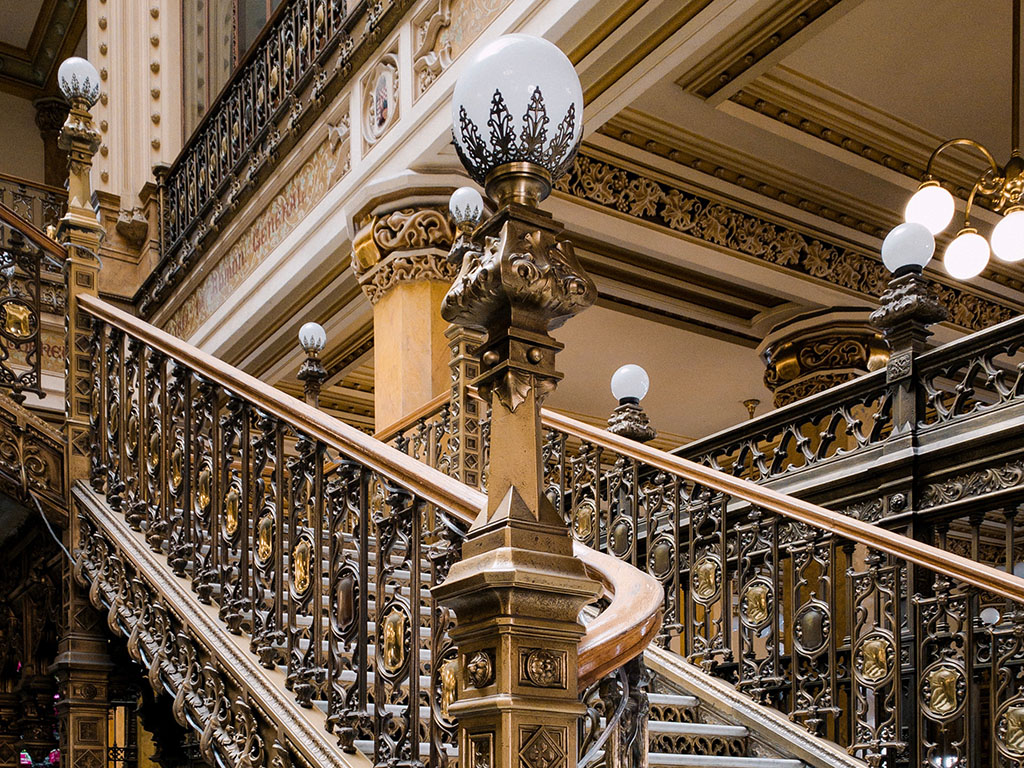 An Unexpected Haven of Calm

After the noise and crowds of the city centre, my final secret pocket of curiosity is a haven of calm. A little off the beaten track in decidedly non-touristy Santa Maria la Ribera, the Kiosko Morisco (Moorish Kiosk) is tucked away in a charming, leafy little park, surrounded by jacarandas and locals dancing cumbia, practicing tai chi or just sitting, contemplating this marvellous structure. Essentially an elaborate, Moorish-style bandstand, built entirely from steel, its wonderfully intricate geometric patterns and rich colors make a genuinely lovely contrast with the verdant greens of the park that surrounds it.

Theories abound about the provenance of the Kiosko, supposedly brought over from China, or a gift from an Arab sheikh, with the geometric forms and decorative detailing fuelling suspicions of astrological, magical, even occult significance. The reality is a little more mundane, as it was designed by a Mexican engineer to represent Mexico at the New Orleans World’s Fair in 1884, and again used at the St Louis Exposition in 1902. Why the neo-Mudejar architectural style was chosen to best represent the Mexican Republic is anyone’s guess!

The Kiosk, and the Alameda Park are a tonic for anyone in need of a rest from the relentlessness of Mexico City, the perfect place to take a break, and drink in the peace of a genuine hidden jewel of this extraordinary metropolis.

The less visited places of a city speak to me more eloquently about its past and its present than the grander attractions to which tourists flock. These smaller corners, equally as beautiful, often fill in the gaps in the history of a city, and certainly paint a more vivid and vital picture of how history informs day to day life. For me, these are the true gems of Mexico City, and ones that should not be missed by anyone lucky enough to visit.

To really get to know the unknown corners of the city, check out Context's private and small group tours!

Felix Gott is a freelance travel writer, content creator, and Context expert, currently living the good life amidst the beautiful chaos of Mexico City. After many years working in the cultural heritage sector in London, he took a plunge and went in search of new experiences on a different continent. He is fascinated by hidden histories, identity and cultural oddities, with a particular interest in religion and politics. He writes semi-regularly about his experiences in Mexico at www.felixgott.com.

How to Give a Gift Card from Context

Travel
Visiting Paris with Kids? Here's a List of What You Need to Do