Ah, the City of Lights. Is there anything more romantic, charming or picturesque? From the blooms of the spring to the brisk intrigue of the winter, as the saying goes, it’s always a good idea. If you’ve visited the capital of France more times than you can count, consider focusing your next jaunt on Montmartre, Paris. Within the 18th arrondissement, this hilly district is also commonly referred to as La Butte, and is one of the dreamiest areas of the town. Most notably, given its hilly nature, tourists will flock here to capture an Instagram-worthy view of the city, and of course, to see a show (or snap a photo) at the iconic Moulin Rouge. But while this modern-day area gets plenty of traction, there’s plenty of wonders lingering in its past, too. Even if you consider yourself knowledgeable about French culture, you might not know these surprising nuggets of wisdom about Montmartre, Paris:

It has the only vineyard in Paris: Clos Montmartre.

While they say beer is cheaper than water in Prague, it’s arguable you could say the same of wine in France’s capital. Inexpensive, dry, and vibrant, the many notes of ‘du vin’ make it easy to feel warm and buzzed while you’re wanderlusting. Even with all of the grapes in the air, the only vineyard in town is in Montmartre, Paris! Clos Montmartre is located on quite the steep slope, so you’ll get your workout in before you begin your tasting. Unlike vineyards in Italy, Argentina, or even in Sonoma or Napa, you won’t get much of a view here, especially since it’s north-facing, which cuts out the beautiful daylight. They do have 2,000 vines to admire, but they don’t have the gorgeous roses at the end of the row you’re used to. This isn’t the countryside, after all! Instead, you will see aubretia or lavender bushes, mostly for decor. While it might not be what you imagined you’d find in France, for a city vineyard, it’s an interesting experience. 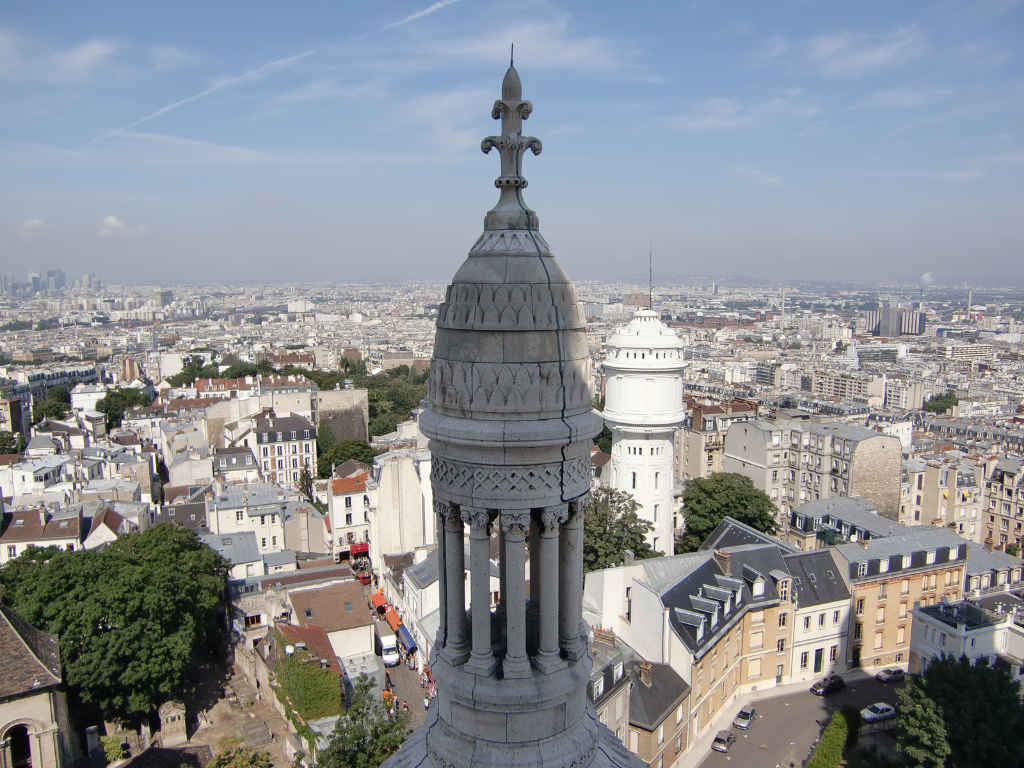 It’s the second highest point after the Eiffel Tower.

If you didn’t climb up the Eiffel Tower, can you even say you’ve been to France? We think so, but if you want another uphill challenge in sightseeing, make it to the top of Montmartre, Paris, which is the second highest point in town. You can take a train part of the way, but to reach the tippy-top, you’ll need to go on a tour bus or use your own two feet. We recommend the latter, since the best way to recover from the cosmopolitan hike is to nibble on a baguette and order a bottle of something bubbly. Do as the Parisians do, right? 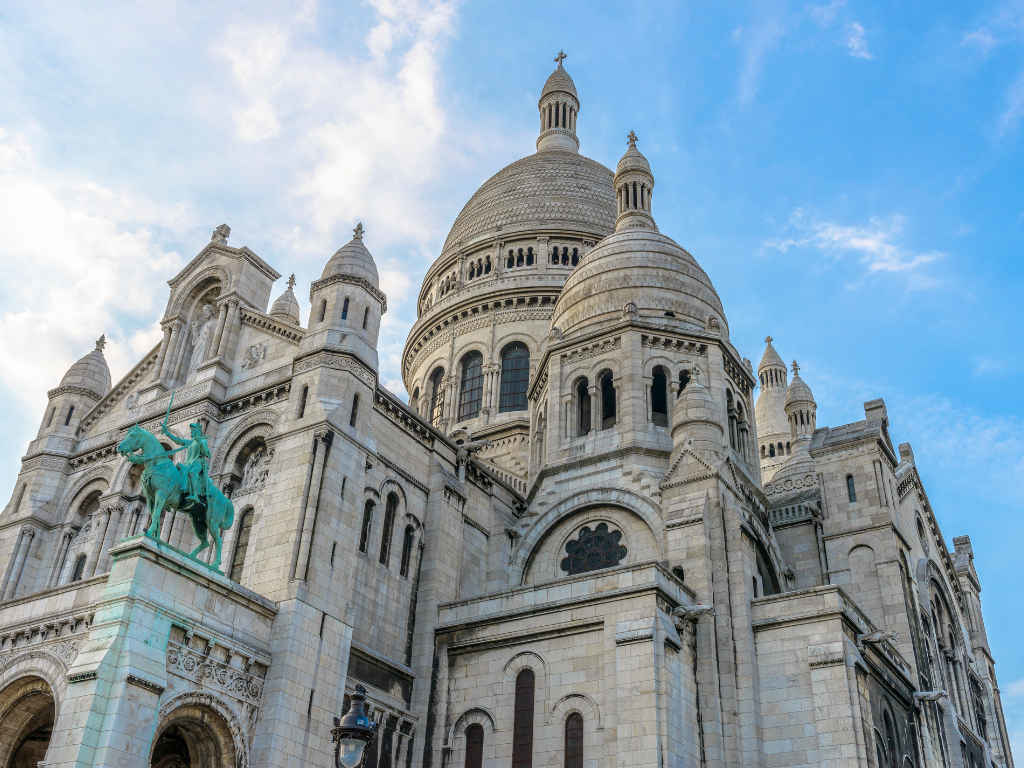 It’s home to one of the most visited monuments: Sacre Coeur Basilica

Translating to ‘The Basilica of the Sacred Heart of Paris’—every traveler wants to be part of the allure that created a city that’s renowned for love. Construction started in 1875, and it took six architects to bring it into fruition, but the most interesting fact about this gorgeous masterpiece is found in its stone. In fact, it's made of a fine grain that releases calcium when it gets wet. That means the more it rains over the years (and decades), it’ll become whiter. After strolling around and admiring the beauty, take the challenge and climb to the forecourt of the Basilica. Inside this dome, you are more than 200 meters above the Seine River—and trust us, you can see every last corner of not only Montmartre, Paris—but the whole city.

The most famous and respected artists lived there.

How was Montmartre, Paris born? Out of those who dared to be different. Who were dreamers. Who weren’t afraid to color outside of the lines. As writer Felicien Champsaur put it in 1882: “In this bizarre land swarmed a host of colorful artists, writers, painters, musicians, sculptors, architects, a few with their own places but most in furnished lodgings, surrounded by the workers of Montmartre, the starchy ladies of the rue Bréda, the retired folk of Batignolles, sprouting up all over the place, like weeds. Montmartre was home to every kind of artist.”

So who lived here? In the wealthier lower slopes (that didn’t require such a trek), Vincent van Gogh resided, along with fellow painters Edgar Degas, Auguste Renoir, and Gustave Moreau. Because they flocked here and increased the demand, supply arrived in the form of art stores, selling paint brushes and canvases. And as the 1900s blossomed, art galleries opened to display masterpieces of the area—many of which remain today.

But of course, you can’t forget Pablo Picasso, who lived in a more desolate, shady area known as Bateau-Lavoir. Even though it wasn’t as pristine as the other streets, artists, writers, actors and other creatives found a solace here, meeting together to melt their ideas together. Rumor has it the parties were wild—and often fueled by copious amounts of wine.

Considering Montmartre welcomed misfits and gave them a destination to indulge in their imaginations, it’s no wonder it became a place where taboo practices were welcomed. In the late 1800s, this area of the City of Lights blended together classes, incomes, professions, and sexual orientations, allowing anyone who trekked there the opportunity to explore their fantasies. This was mostly through dance, and most famously, at the Moulin Rouge club, which was built in 1889. Here, you could see everything from clowns and acrobats to tightrope walkers and erotic performances. Though the original structure burnt down in 1915, it was rebuilt—complete with the legendary red windmill on its roof—and is still open to the public.

If you’re really a France fanatic, you’ve seen the 2001 blockbuster Amélie at least a few (dozen) times. Where she does her frolicking and adventuring is none other than Montmartre, Paris. Or rather, a recreation of it known as Studio 28, featuring the same charm but in an exaggerated fashion. Some of the shops—like the grocery store and the bar—are real locations, and can be part of your tour around the 18th arrondissement.

It was once its own village.

Since it was the land where anyone—and—everyone was welcome, Montmartre, Paris has historically been known as having a distinctive personality from the rest of the city. This was so much the case in the late 1800s, that it wasn’t part of the town at all, but its own village. And in 1871, locals turned against the government and developed their own system known as La Commune. It only lasted three months—but even now, those who have been bred and lived here call themselves Montmartrois, or bobos, a short word for bourgeois bohemians. They are considered your quintessential hippies, but with quite the income, so money woes aren’t part of their routine. The French tend to get frustrated with their lifestyle, so much so that you’ll often see street art that says ‘Bobos, cassez-vous.’ What’s this mean? Bobos, get the hell out.

Keep an eye out for that graffiti, and some of these great landmarks, when you're in Montmartre next. Want to learn with a true expert? Get a comprehensive view with one of Context's tours, or learn more about your favorite destination or topic with our virtual, live-taught courses and seminars.

Travel
How the Paris Panthéon Honors French Women (Sort of)