For centuries, intellectuals, writers, musicians, and artists have flocked to the City of Lights, a trend that holds true even today. After taking some time to soak in the iconic historical sites, stunning architecture, world-famous art, and mouthwatering cuisine, take a day trip outside of French capital to one (or more) of the many extraordinary heritage sites just outside of the city. Whether you are a wine lover, history buff, art aficionado, or traveling with kids, these excursions are sure to be worth your while.

Here are our top ten places to visit on a day trip from Paris.

The once sleepy country village gained fame in the 17th century when Louis XIII built a hunting lodge there, which his son, Louis XIV, later converted into an opulent palace. In 1682, Versailles became the headquarters of the government until the Revolution. Visit the King and Queen’s apartments, the Royal Chapel, the Royal Opera, and the Hall of Mirrors, an expansive gallery lined with shimmering mirrors. Take in the exquisite royal gardens designed by the renowned landscape architect André Le Nôtre, with the manicured hedges, reflecting pools, and marble sculptures. If you visit during the summer, be sure to catch the music and fountain shows on Saturdays and Sundays. Join our Half-Day and Full Day Versailles tours to learn about the majestic estate from Context experts in history and art history.

How to get there: Take the RER Line C5 from Paris to Versailles-Rive Gauche station. There are about four trains per hour. The ride is about 45 minutes each way. The palace is a few minutes’ walk from the station. 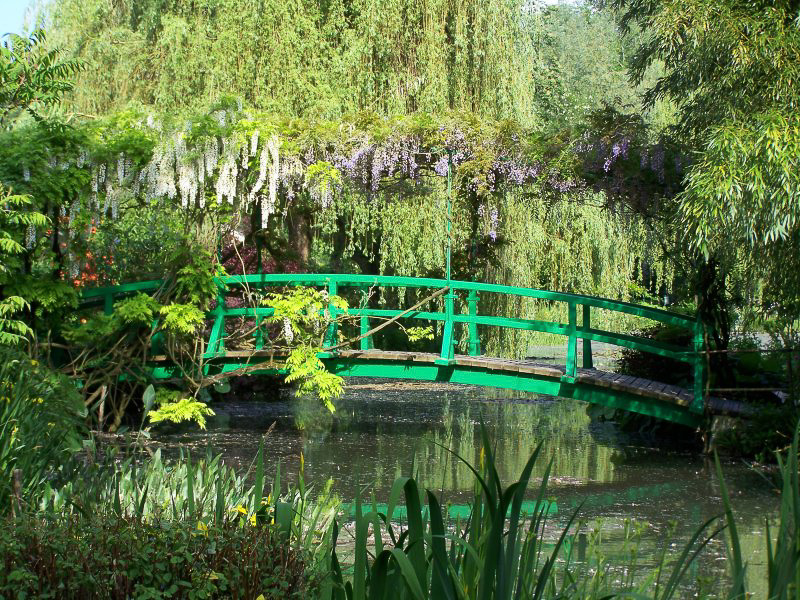 The charming village of Giverny was a favorite among the Impressionist painters. Monet, Manet and Renoir count among the artists who drew inspiration from the beautiful landscape. Known for its water lilies and lovely gardens, Giverny is a great place to visit in the summer when the flowers are in bloom. Stroll through Monet’s old home and gardens, and spot the replica of the Japanese bridge recorded by the artist in his most famous painting The Japanese Footbridge. Art lovers should consider joining our tour Giverny: A Journey to Monet's Impressionist Garden for an in-depth look at Monet’s life and art.

Distance from Paris: 50 miles, 1 hour by train and bus

How to get there: Giverny is about 50 miles from the capital. Take the Rouen bound train from the Gare St. Lazare in Paris to Vernon. The ride is about 45 minutes and there are six trains per day. From the train station, the Vernon–Giverny bus will take you to Giverny in about 15 minutes. 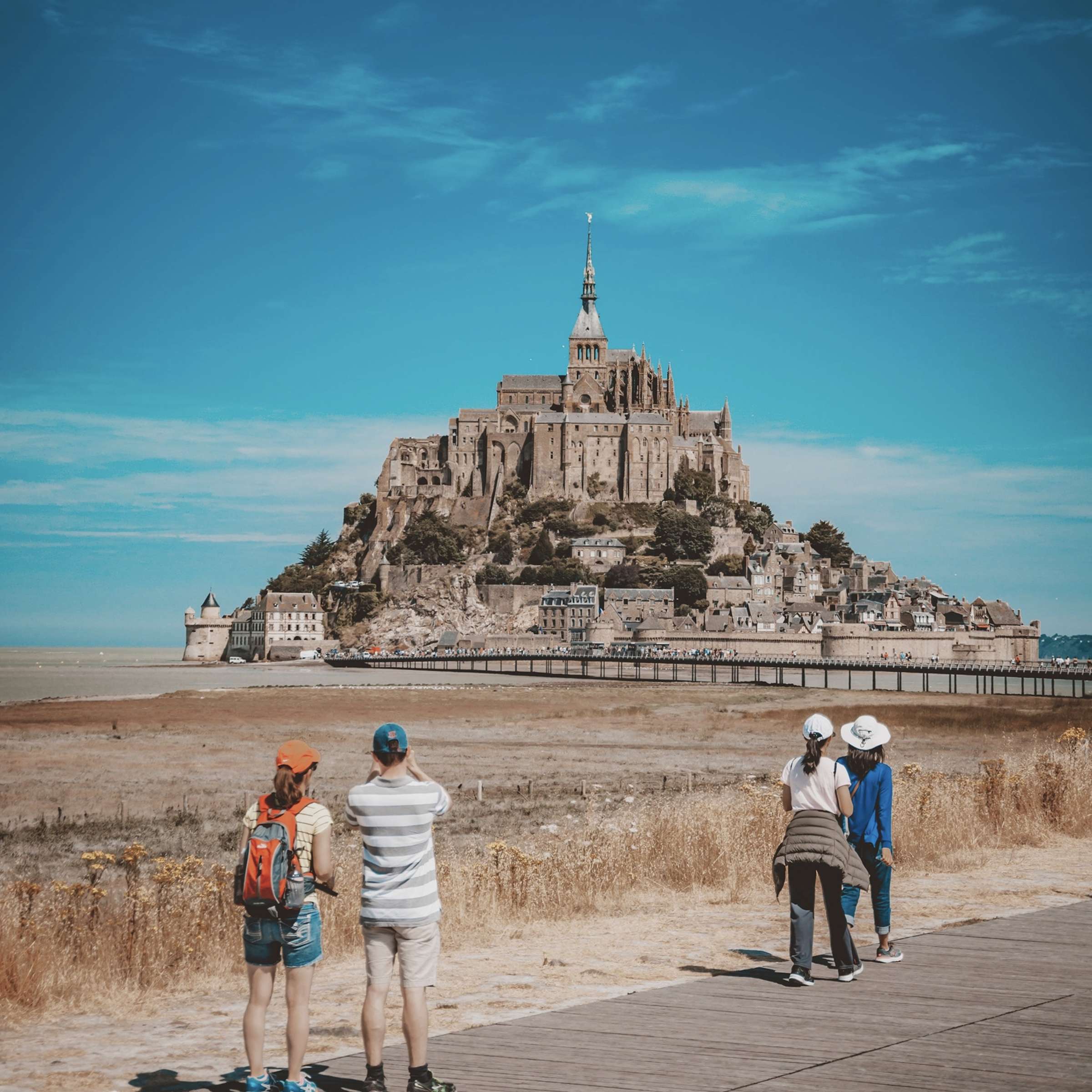 Situated on a rocky island just off the coast of Normandy, Mont St. Michel is a breathtaking historical sight and one of France’s most visited destinations. Have your camera ready as you approach this UNESCO World Heritage Site to capture the postcard-worthy view of the abbey and its mirror reflection in the bay. According to legend, the Archangel Michael appeared to the Bishop Auvert in the nearby town of Avranches in 708 A.D. and instructed him to build a church on the island. In 966 A.D., a Benedectine abbey was built there and rapidly became a popular pilgrimage site and center for learning. In the nineteenth century, a tower and spire were added, crowned by a gilded statue of Archangel Michael. Join us on our Mont Saint-Michel Tour: Full-Day Excursion from Paris for an in-depth experience at this awe-inspiring site.

How to get there: Take the TGV from the Gare de Montparnasse in Paris to Rennes. The ride is about two hours. From Rennes, Keolis coach buses run to Mont St. Michel four times a day. The bus ride is an hour and twenty minutes. At arrival, visitors can take a free shuttle bus or walk the bridge to the island. 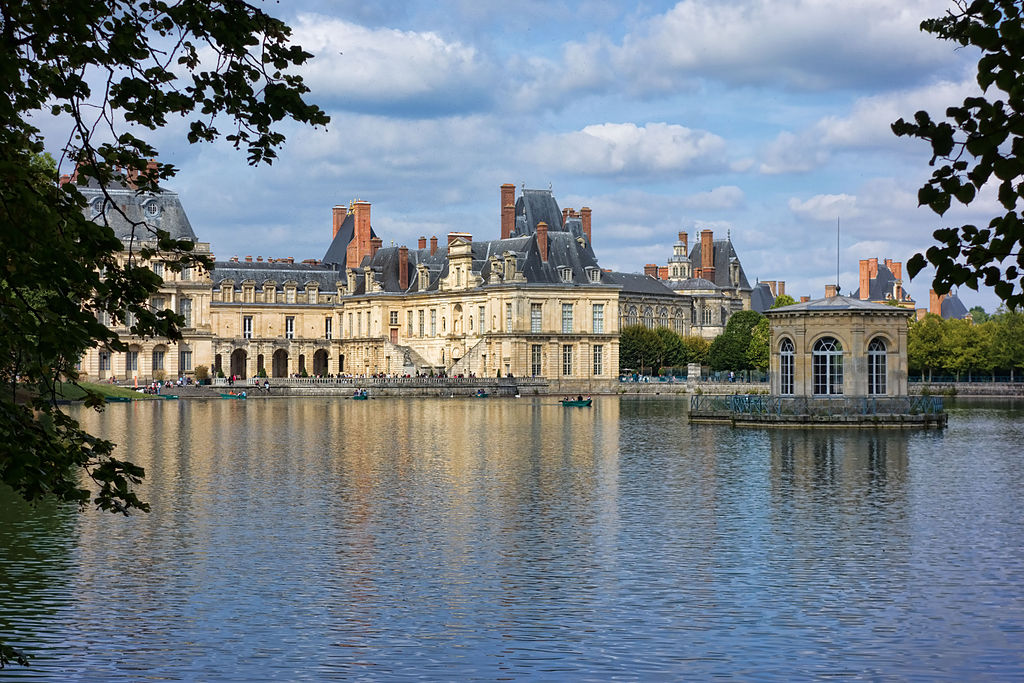 Less popular and crowded than Versailles but no less stunning is the Château of Fontainebleau, former abode of French monarchs ranging from King Louis VII to Napoleon III. The luxurious interiors feature more than 1500 rooms, and include the Gallery of Francis I, a Renaissance masterpiece and showcase for Italian art. Explore the castle’s famous horseshoe-shaped staircase entrance, four museums, three ornate chapels, and breathtaking landscape gardens and fountains. After visiting the castle, take a walk through the lovely historical town and stroll through the scenic forest of Fontainebleau, the second largest in France.

Distance from Paris: 40 miles, 40 mins by train and bus

How to get there: From the Gare de Lyon in Paris, take the train for either Montargis Sens, Montereau or Laroche-Migennes. Get off at Fontainebleau-Avon station, then take the ‘Ligne 1’ bus destined for Les Lilas, and get off at the ‘Château’ stop. 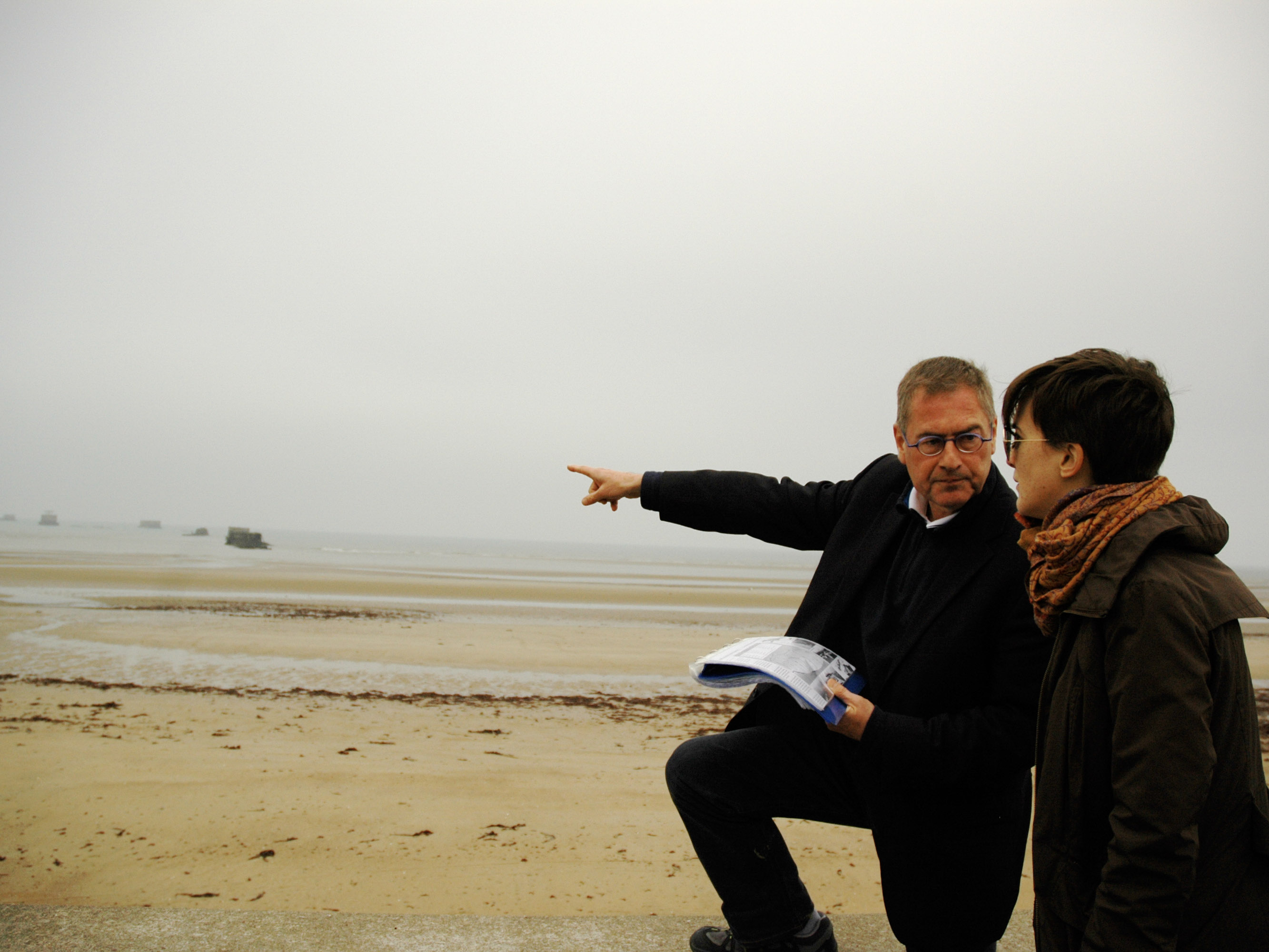 As the site of the D-Day landings, Normandy is a great place to explore for visitors passionate about WWII history. Start at the Pointe du Hoc, a steep cliff where American Rangers carried out a daring assault on D-Day, and which now houses a monument and a museum. Pay your respects at the American cemetery, which contains graves marked by stark white crosses. The Caen museum and memorial is also worth a visit, offering an overview of the Battle for Caen. History lovers are invited to join our Paris D-Day and Normandy Beaches Tour to learn about the Allied Invasion of Normandy with a World War II expert.

How to get there: Take the train from Paris’ Gare St. Lazare to Caen, which takes an hour and 45 minutes, or to Bayeux, which is just over two hours away. Normandy, while about 125 miles from Paris, is still a feasible day trip. 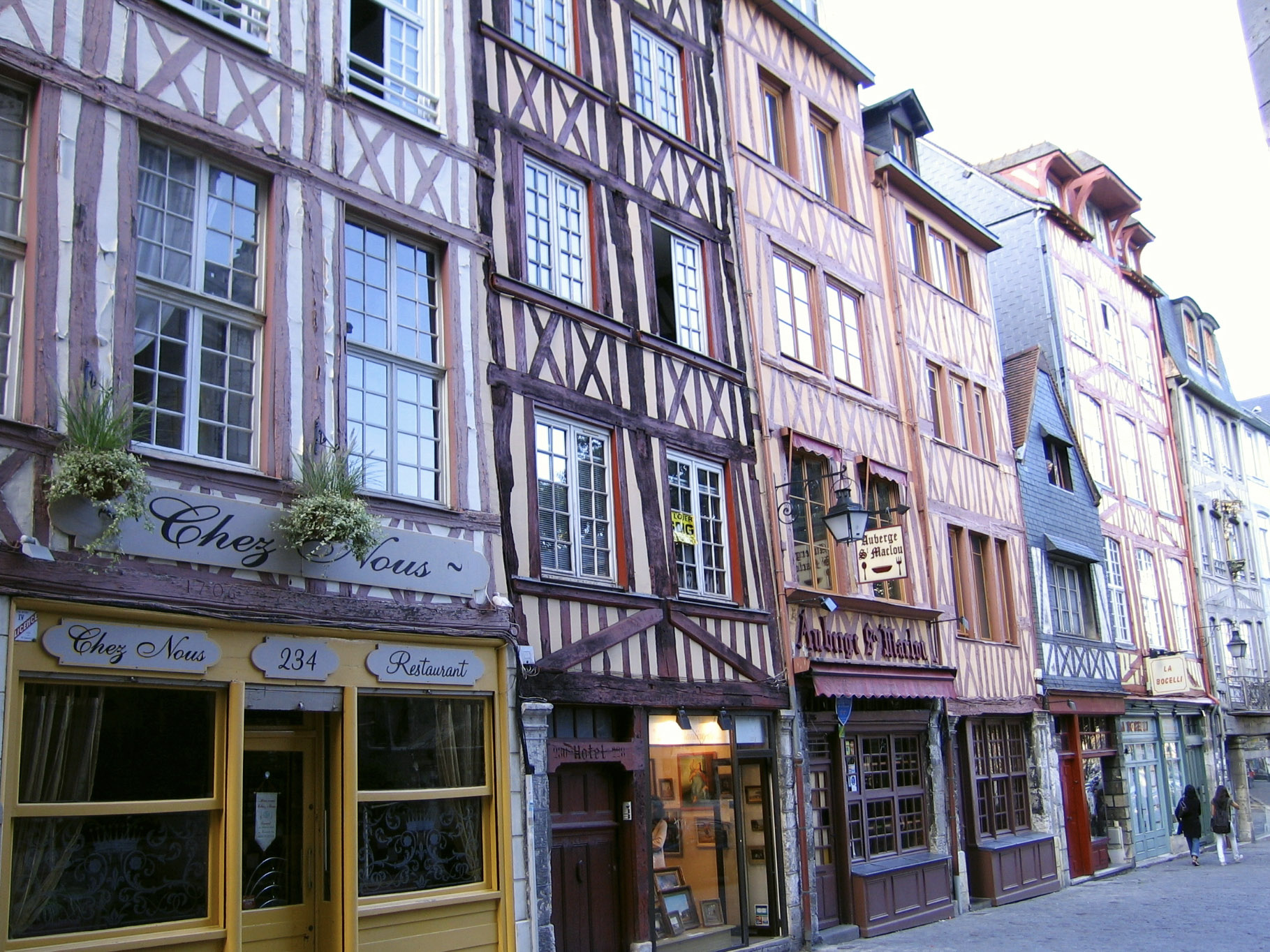 The fortified medieval town of Provins is a beautiful and well-preserved UNESCO World Heritage Site that dates to the 11th century. Walk around the ramparts and fortified gates. Visit the Tour César, which offers spectacular views of the town and surrounding countryside, and walk through the town’s winding underground tunnels below the cobbled streets. The historical Musée de Provins et du Provinois is worth a visit, as well as La Grange aux Dimes, a storage barn and marketplace where you can get a feel for the local culture. Visitors with an interest in horticulture will enjoy the enchanting Rose Garden of Provins, home to over 300 rose varieties. Provins roses are known for their medicinal remedies, and Louis XIV’s apothecary Pierre Pomet once called them “the most esteemed of any flowers in the whole world.”

How to get there: From the Gare de l’Est in Paris, take the SNCF Transilien Line P to Provins. The train runs every hour. 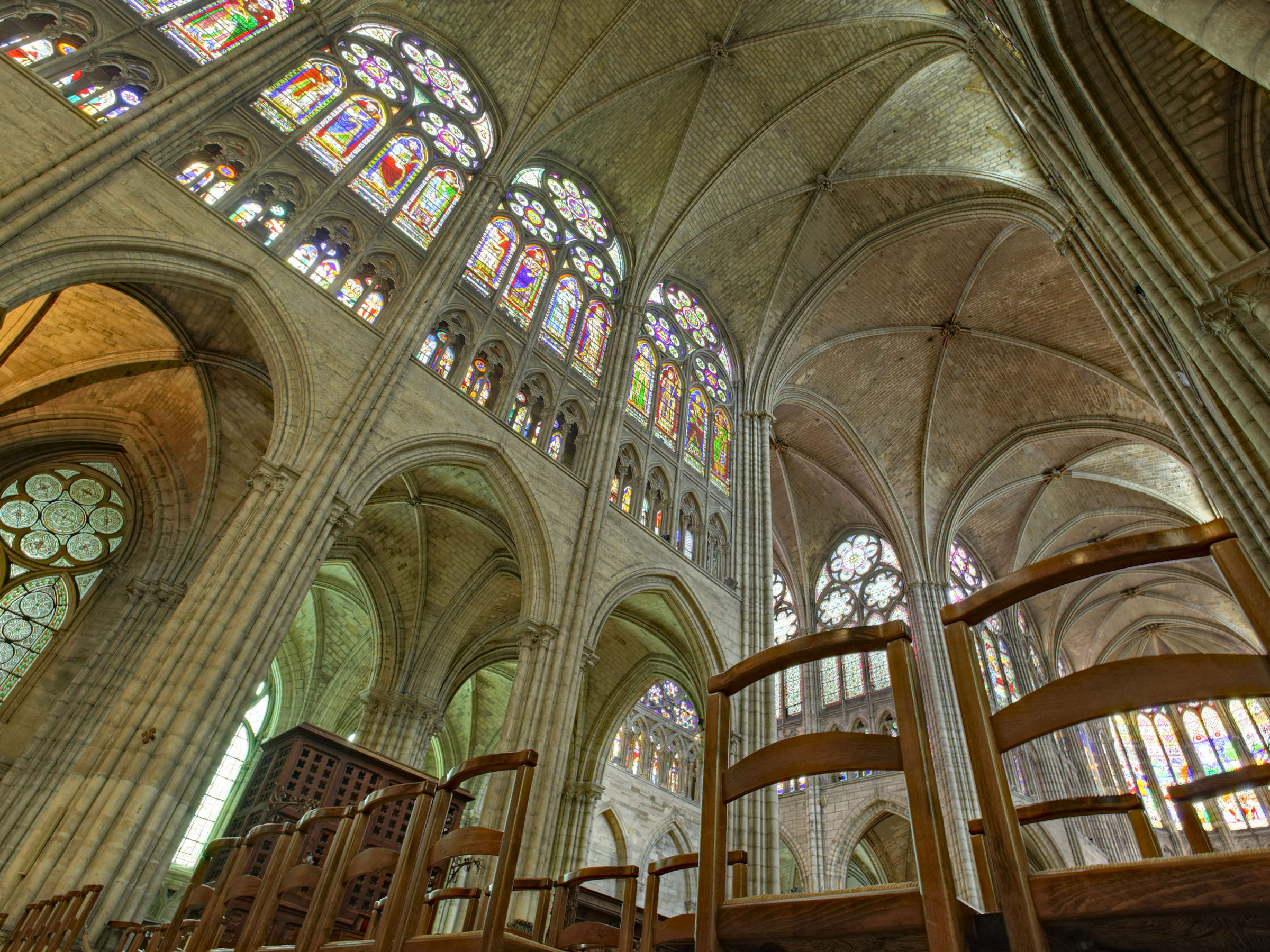 Chartres, the capital of the Eure-et-Loir region, is one of the best day trips from Paris for lovers of history and gothic architecture. The town is home to the famous 12th century Notre Dame cathedral known for its signature blue stained glass, a labyrinth set in the stone floor and the Sancta Camisa, purported to be a piece of clothing worn by Mary at Jesus’ birth. After visiting the cathedral, visit the Musée des Beaux-Arts in the former Bishop’s Palace next door and stroll around the medieval city.

How to get there: Take the direct train from Paris Montparnasse station to Chartres. Trains run every half hour. 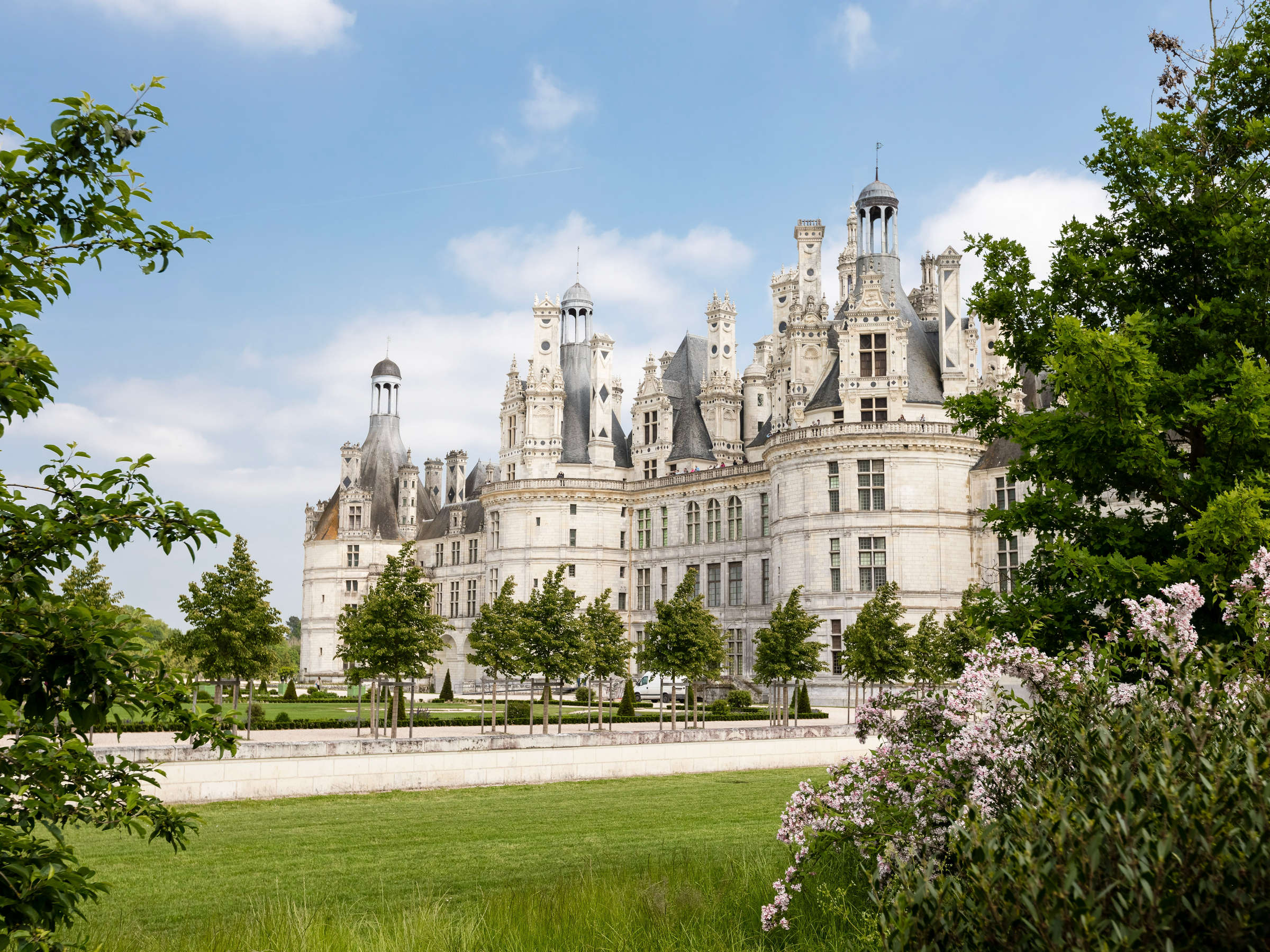 The Loire Valley is a must-see for lovers of castles and wine. The central Loire region is home to more than 500 castles, including the famous Château de Chambord, the Château de Chenonceau and the Château de Cheverny. A UNESCO World Heritage Site that is nicknamed the “Garden of France,” the region is crossed by the Loire River—the longest in France, and known for its fruit orchards, vineyards, and artichoke and asparagus fields. Join our Loire Valley Castles Tour to learn more about the region’s rich architectural heritage.

How to get there: Take the TGV from Montparnasse station in Paris to Tours. The ride will take about an hour and fifteen minutes. 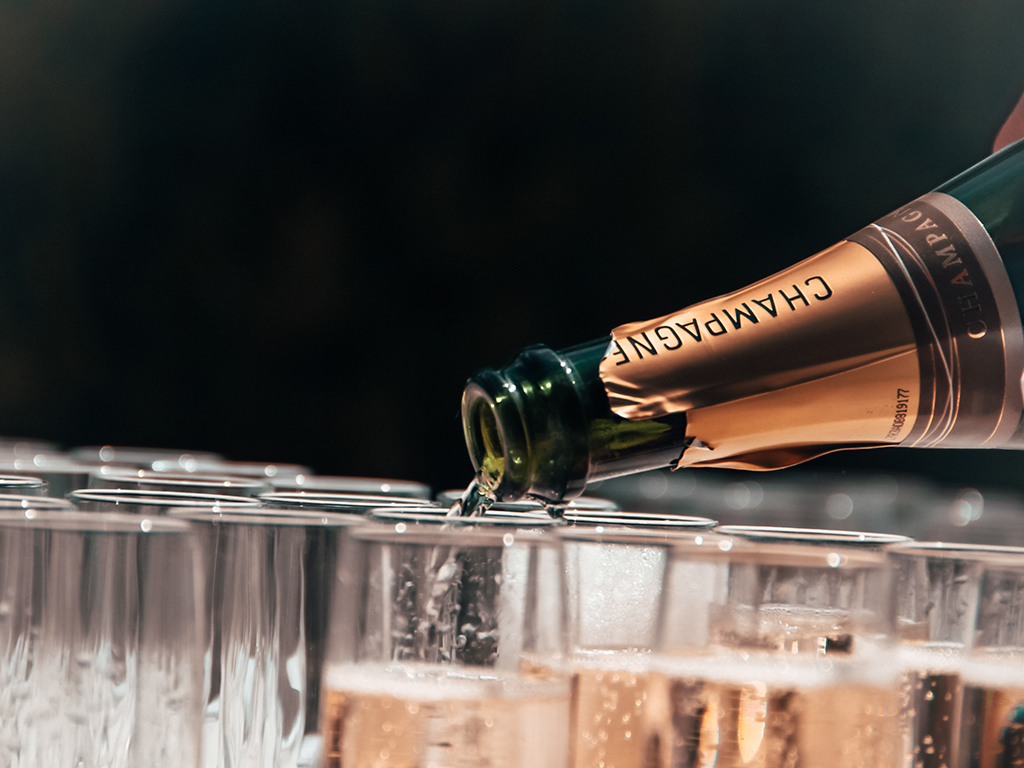 Reims, the capital of the Champagne region, is well worth a visit for visitors who love champagne. Famous champagne houses, including Veuve Clicquot, Moet et Chandon, Taittinger, G.H. Martel, and Pommery, offer tours and tastings. Visit the Palace of Tau, where French kings stayed before their coronation ceremonies next door at the gorgeous Notre Dame cathedral, with beautiful glass stained windows and statues lining the exterior. Reims’ Musée des Beaux-Arts, housed in the former St. Denis abbey, has an impressive collection of European art.

How to get there: Reims is about 90 miles northeast of Paris. Take the TGV from Paris Est train station. Trains leave every thirty minutes or so. The trip takes about 45 minutes each way. 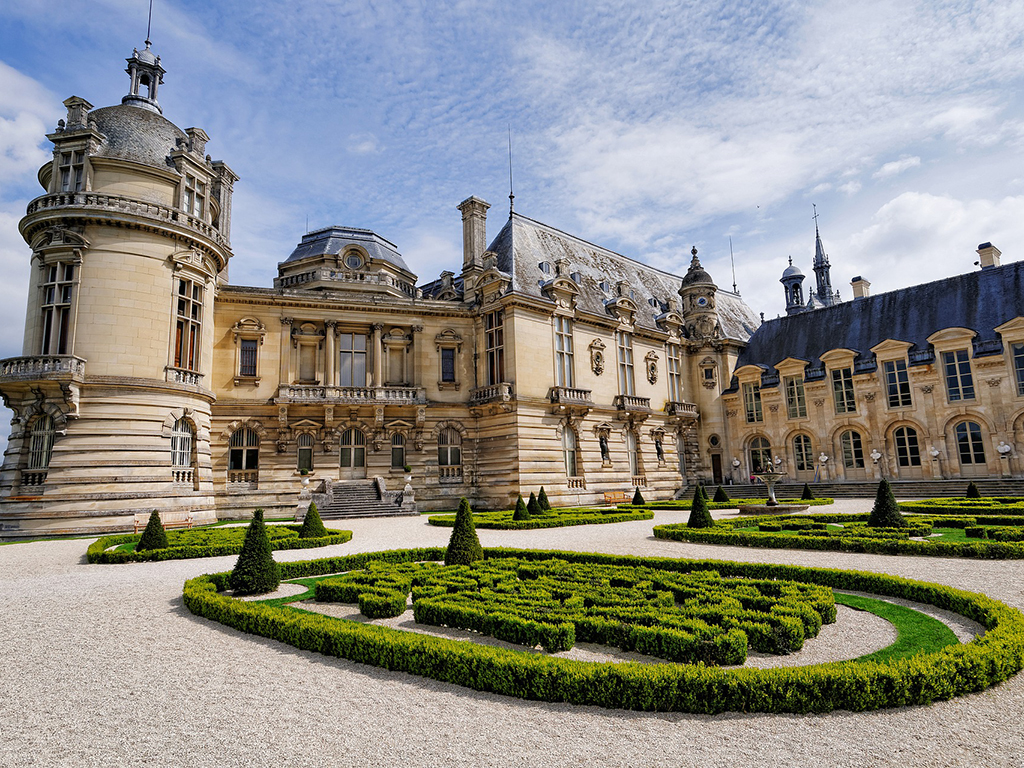 A quick 30 minute hop from the Gare du Nord, Chantilly is one of Paris' most accessible day trips. Once home to Henri d’Orléans, the fifth son of King Louis Philippe I (known as the "Last King of France" following the 1848 revolution), the town's highlight is Henri's former dwelling, the opulent Domaine de Chantilly. The castle grounds are actually home to what were once two separate homes—the Petit Château, built in 1560 for the Duke of Montmorency, and the Grand Château, reconstructed after the Revolution for Henri—as well as a magnificent garden designed by Le Nôtre. Henri's greatest legacy, however, was the art collection he left behind. Now housed in Chantilly's Musée Condé, that collection includes works by Raphael, Poussin, and Delacroix (among many others), and is the second-largest group of antique paintings in France behind the Louvre. Finally, before you go—be sure to make time to savor a few bites of the whipped cream (preferably atop a cup of chocolat chaud) that bears the town's name.

How to get there: Take the TGV from Paris Gare du Nord station to Chantilly. Trains leave every thirty minutes or so. The 23-mile trip takes about 40 minutes each way.

Travel
Where to Eat Tapas in Barcelona