Think of Britain’s capital and the first image that springs to mind is Big Ben, the iconic London clock tower of the Houses of Parliament in Westminster. Originally the site of the royal palace of London, Westminster is now the seat of governance and the bastion of British democracy. Big Ben–one of the most reliable clocks in the world–has no shortage of admirers, and the London clock tower has been used to set the scene in countless films and books over the last century.

Planning a trip to London? Check out Context Conversations, online seminars and courses perfect for that pre-trip education, or Context London private tours for when you’re in the Big Smoke itself.

When was Big Ben Built? 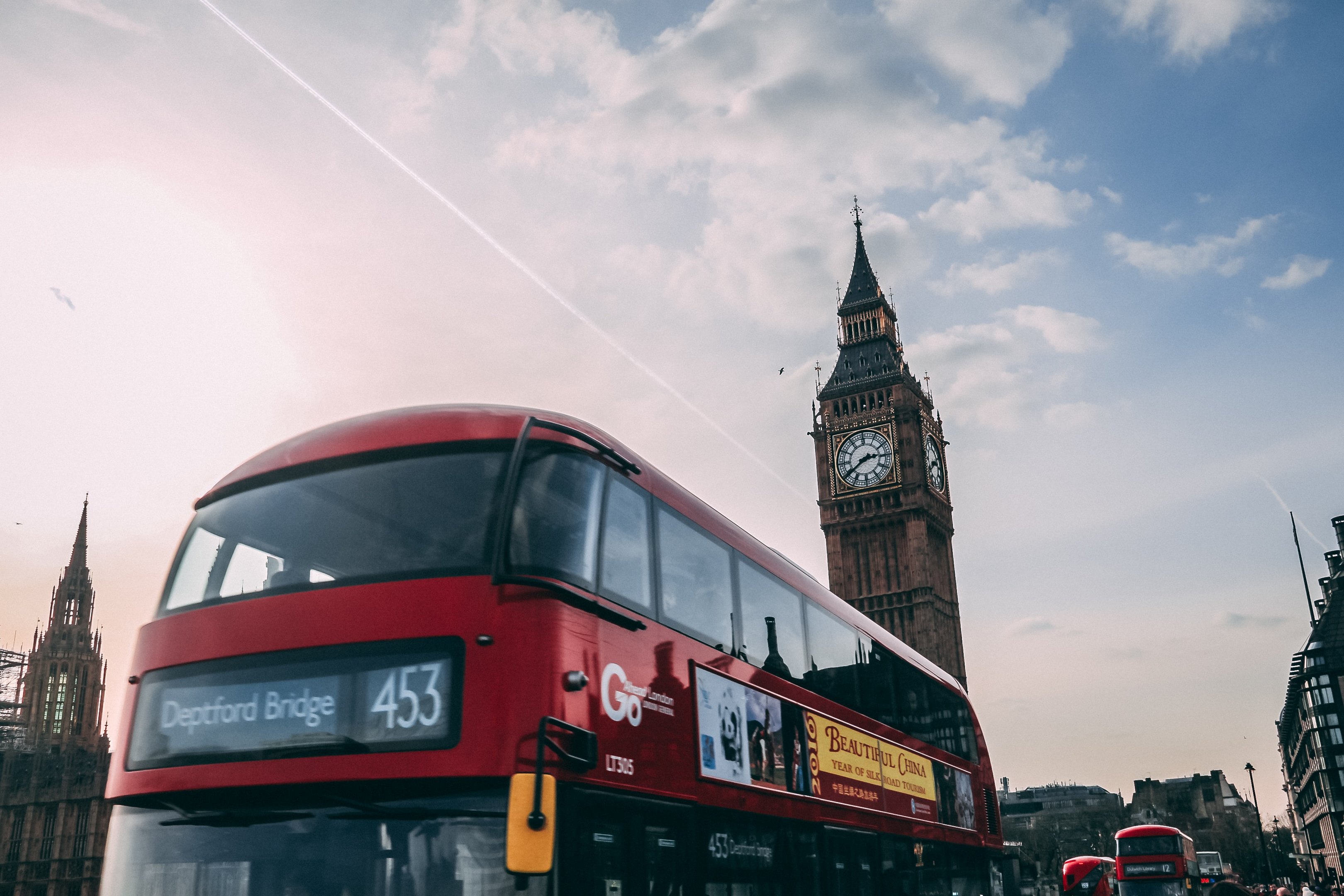 Although the new Palace of Westminster–with its world-renowned London clock tower–looks like a remnant of the medieval city, it’s merely 160 years old. Built during the reign of Queen Victoria–after a tragic fire on October 16, 1834, destroyed most of the old Palace–the designs feature beautiful neo-Gothic elements that give the Palace its ancient look. The construction was completed in 1859, and its four-faced clock was the largest of its kind in the world. The tower rises to a staggering 315 feet high, and 334 steps wind dizzyingly to the top.

One-third of the way up the tower–at step 114–is a shadowy, dismal room, used as a prison cell for several years after the tower’s completion. When MPs weren’t acting in accordance with parliament’s codes of conduct, they’d be thrown into the room atop the tower to reflect upon their misdeeds. The room was last used in 1880 when MP Charles Bradlaugh–a staunch atheist who’d won his seat in the House of Commons as a radical–refused to swear his allegiance to Queen Victoria on the bible. He was only held in the tower overnight but was denied his seat in Parliament for five years. 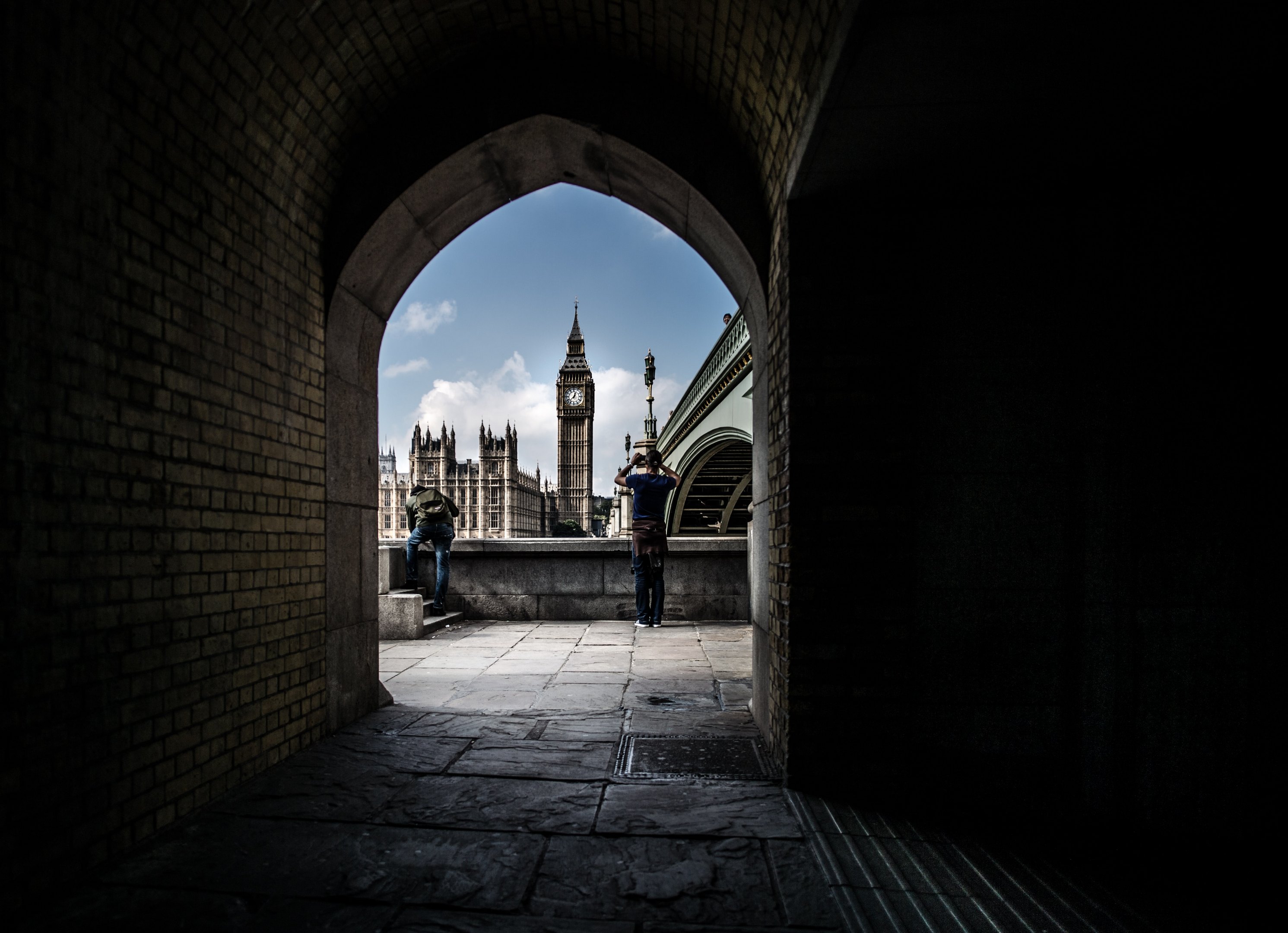 The moniker Big Ben has been in use for over 150 years, and the nickname was originally applied only to the enormous bell inside the tower. The Great Bell received i’s sobriquet in honor of Sir Benjamin Hall, the First Commissioner for Works, who raised Big Ben to its current place atop the tower.

The nickname has been extended to the entire clock tower, despite having had two other official names. The tower was initially named the Clock Tower, an accurate (if somewhat uninspired) name for this massive timepiece. In 2012 it was renamed the Elizabeth Tower to commemorate the Queen’s Diamond Jubilee, though colloquially it will always be Big Ben. 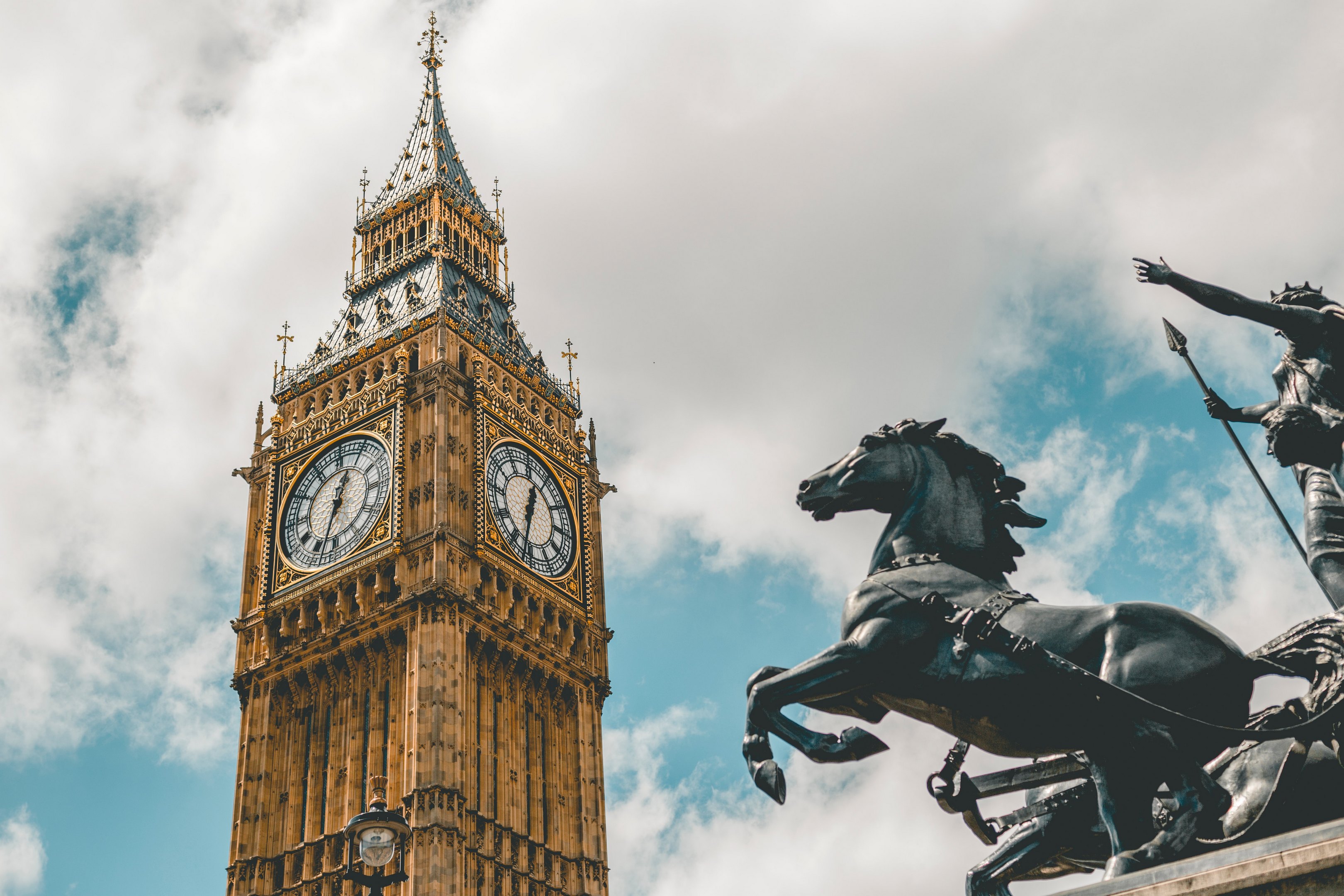 Big Ben is a colossal bell weighing 15.1 tons. Great fanfare accompanied the bell’s arrival to the city, and it sailed down the Thames on a barge before being driven across Westminster Bridge in a carriage drawn by sixteen white horses. The bell hung in New Palace Yard to undergo testing but cracked during rigorous tests in October 1857. A new bell–cast by George Mears at the Whitechapel Foundry–was completed in April 1858 to replace the original bell, and in October 1858 the new bell was winched up the tower to its home in the belfry. After a grueling 30-hour journey, Big Ben was installed atop the tower, where it has hung for the last 160 years.

Sadly–just a few months after its inauguration–the bell cracked, and Big Ben was silenced for four years. The quarter bells, hanging lower in the tower, struck the hour to keep Londoners on time, as architects and craftsmen puzzled over how to repair the Great Bell. In 1863 they arrived at a solution. The London clock tower, Big Ben was rotated by a quarter, causing the hammer to strike a different place of the bell. Meanwhile, the hammer was lightened to prevent further damage. The bell has sounded at a slightly different pitch ever since, and the crack has never been repaired.

The Leaning Tower of Westminster? 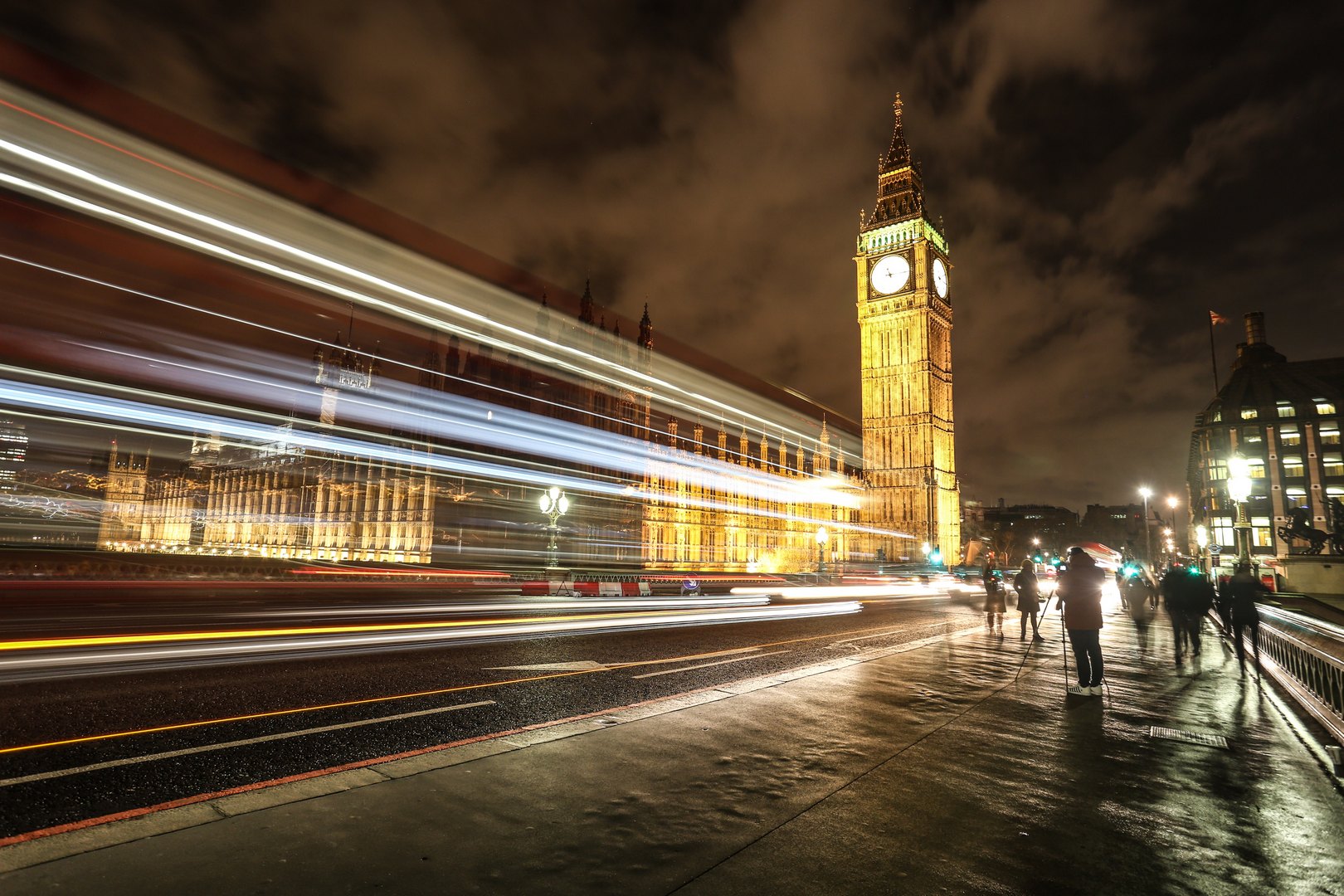 Big Ben might appear to stand perfectly vertical, but it actually has a slight lean. The tilt was discovered when plans were being made for the extension of the Jubilee Line that passes under the Parliament buildings. Changing ground conditions have affected the London clock tower, and it leans ever so slightly to the north-west, with an inclination of 0.26 degrees (that’s just one-sixteenth the tilt of the Leaning Tower of Pisa). Notwithstanding this slight lean, the tower should be safe for 4,000 to 10,000 years.

Take a Penny, Leave a Penny 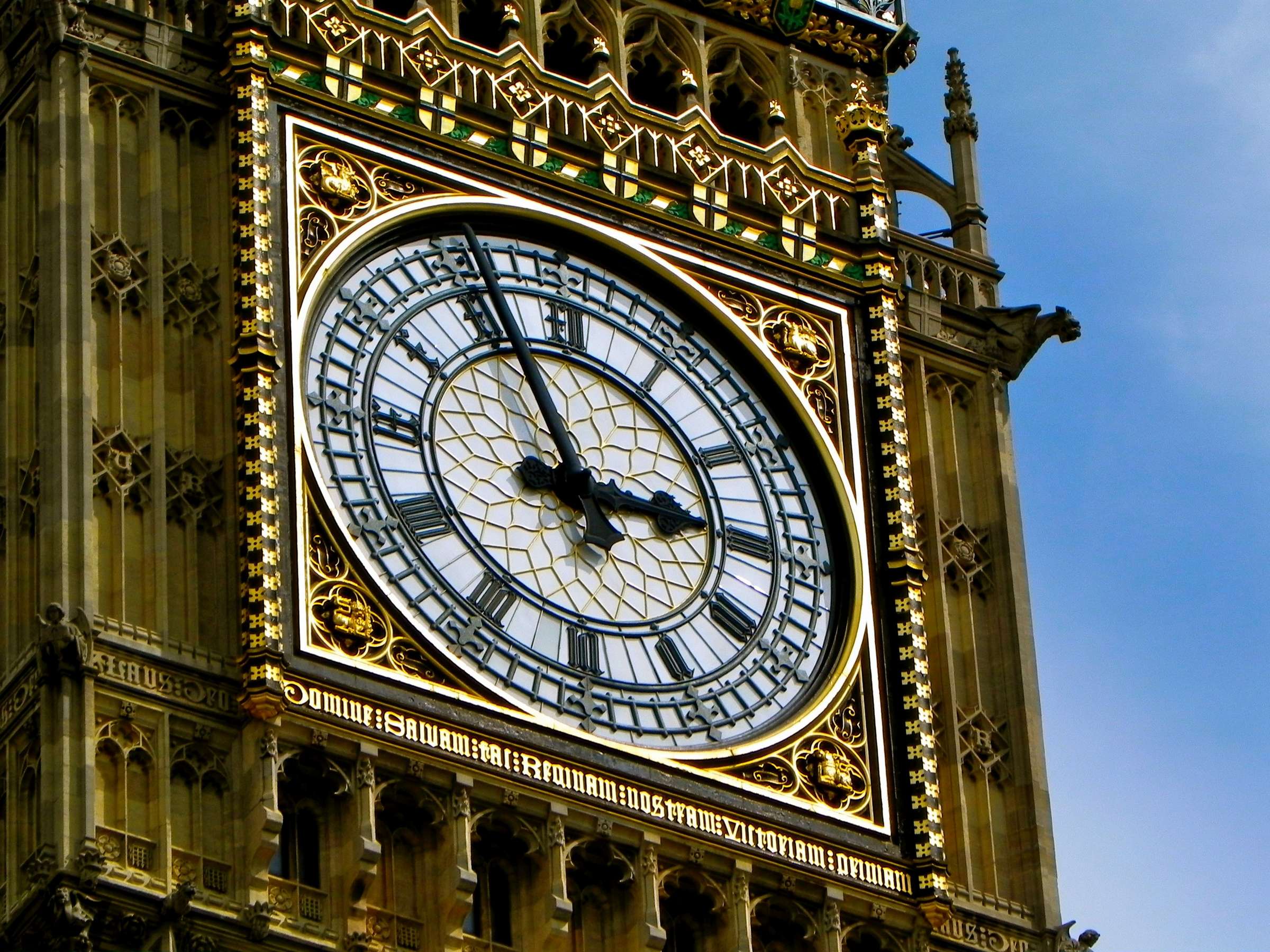 Despite its Victorian mechanisms, Big Ben chimes right on time, and it is accurate to within one second. This pendulum clock is rewound three times a week, and the tedious job–done by hand–takes around one and a half hours to complete. The clock keeps perfect time thanks to a pile of old pennies resting on the pendulum. Adding or removing pennies slightly shifts the center of gravity of the pendulum, and changes the speed of the pendulum swing. Adding a single penny will increase the speed of the pendulum, and slow the clock’s speed at a rate of 0.4 seconds per day. Among all the pennies are two silver coins; one was minted in 2009 to commemorate Big Ben’s 150th anniversary, and the other is a 1977 Silver Jubilee coin marking Queen Elizabeth’s 25th anniversary on the throne. 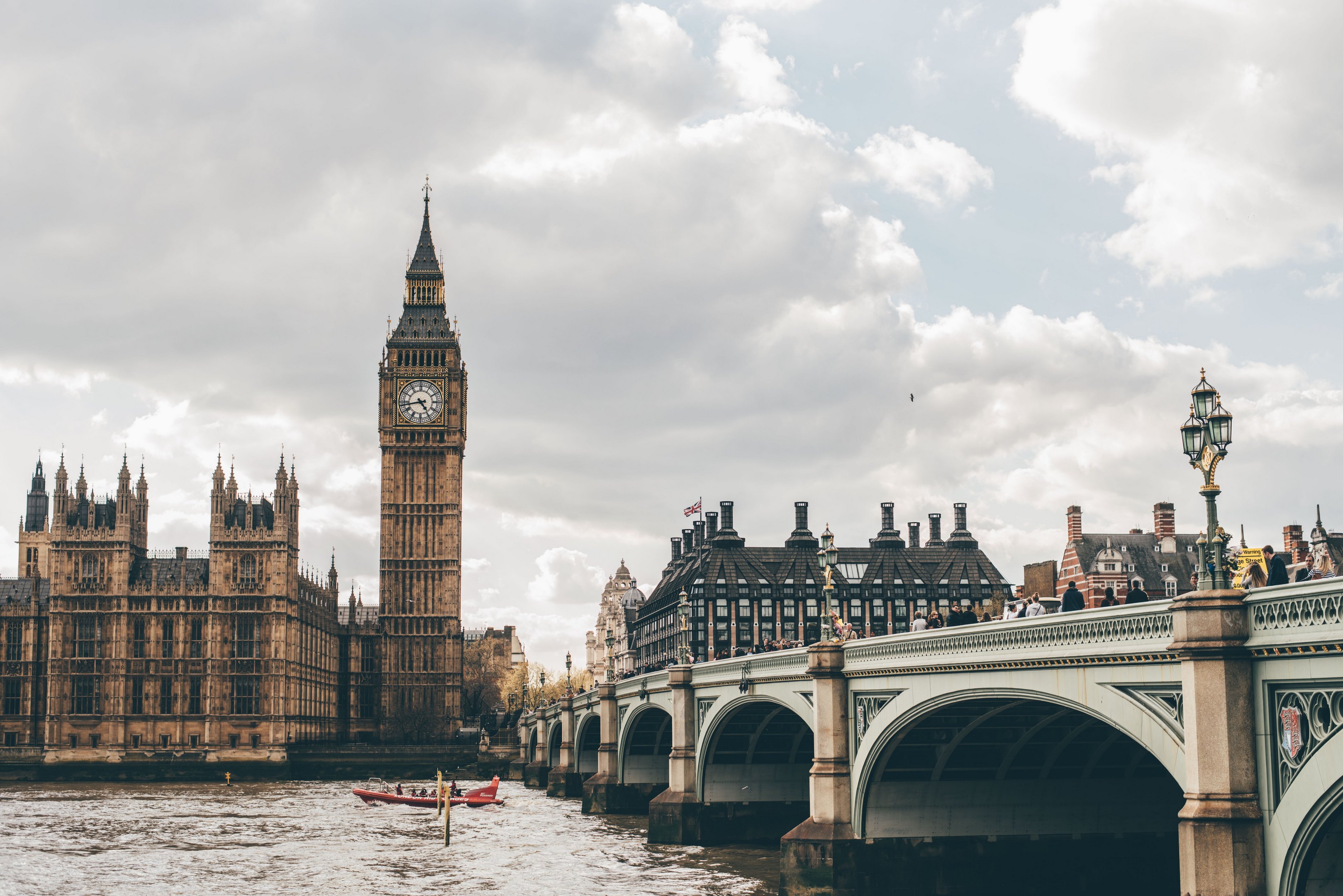 Big Ben has occasionally been silenced for repairs and was darkened during the blackouts of the second world war. Environmental factors have also affected the clock, and in 1949 the clock slowed by four and a half minutes when a flock of starlings held court on one of the minute hands. A heavy snowstorm on New Year’s Eve in 1962 also slowed the clock, and the New Year chimed a full ten minutes late. 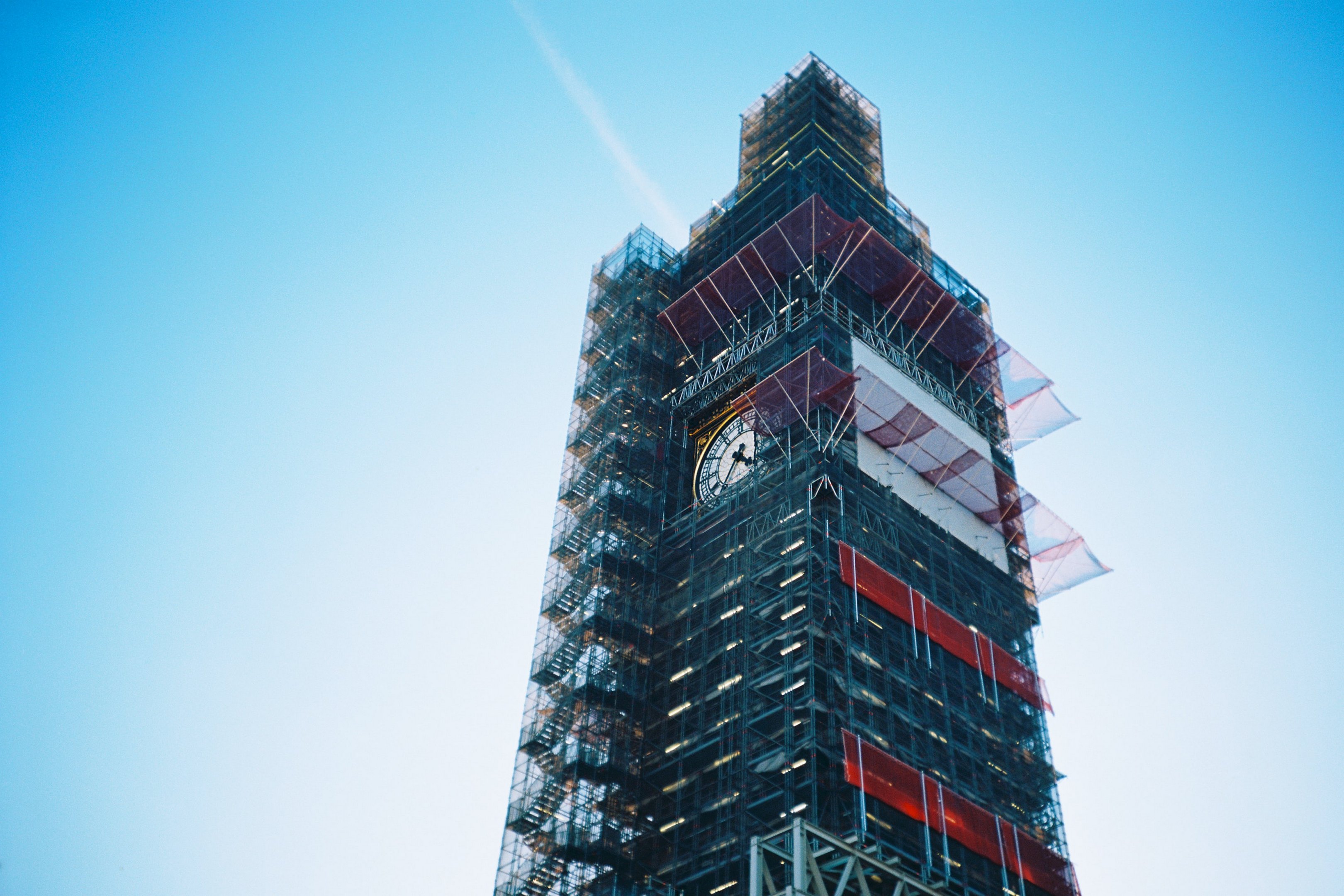 Big Ben has been under scaffolds for the past few years, having a much-needed facelift. With the restoration set to wrap up in 2021, this refurbishment will repair the façade and restore the clock hands and details to their original blue color. Heavy London smog in the early 1900s turned the clock details black, and in the 1980s it was painted black to avoid the discoloring effect. During the conservation work, the London clock tower is silenced to protect the ears of the workers, but you’ll still hear its chime several times throughout the restoration process, on important days such as New Year’s Eve or Remembrance Day.

Join us on a day tour of London, or wander through Westminster on our Parliament tour to get an insider’s view of the governmental processes of England and see Big Ben up close. Interested in visiting London virtually from the comfort of your own home? Context Conversations offers a plethora of online seminars and experiences in London and beyond.