Throughout most of its history (in AD at least), Rome has been the home of powerful and ambitious papal nobility. These nobles left their mark not only on Rome's history, but also on the physical fabric of the city: each family had a unique crest which they strategically stamped on buildings and fountains as a way to announce their identity and influence. From peacekeepers to power players, papal family crests in Rome offer fascinating insight into the clans that have shaped the city and Catholicism. 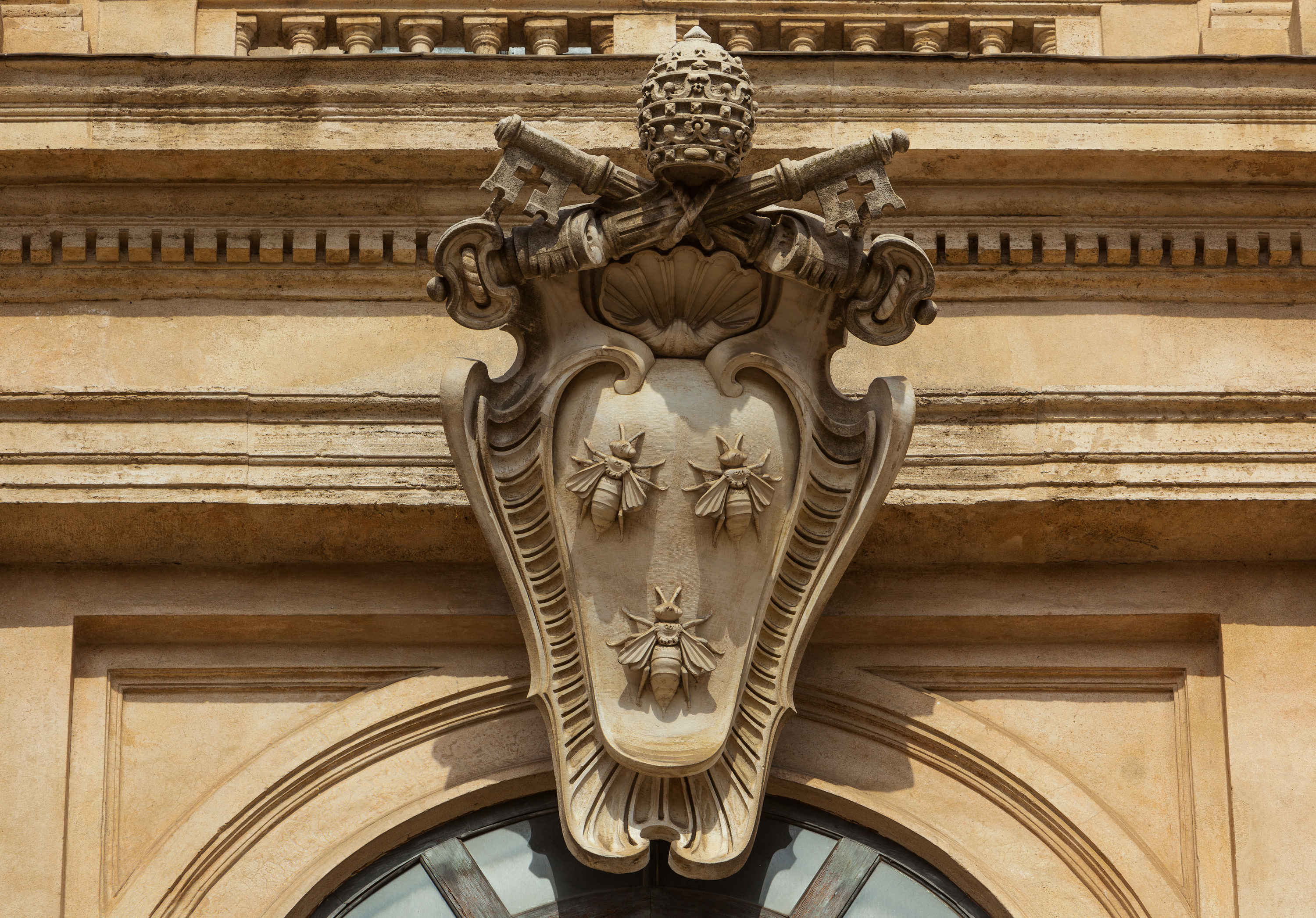 While we may think of lions and dragons as appropriate emblems for ruling families, most pontifical imagery is of the more humble sort. For example, images of bees adorn numerous fountains and churches throughout the city and are particularly concentrated at the Palazzo Barberini. That’s thanks to the Barberini family who came from Florence in the 16th century, reaching the pinnacle of power and prominence in the 17th century when Cardinal Maffeo Barberini became Pope Urban VIII. The clan was originally known by the name of Tafani—meaning horsefly—but realized that the bee, with its associations to Christ’s attributes, would better assert their magnificence and divine right to papacy. Thus, the Barberini bee came into being. 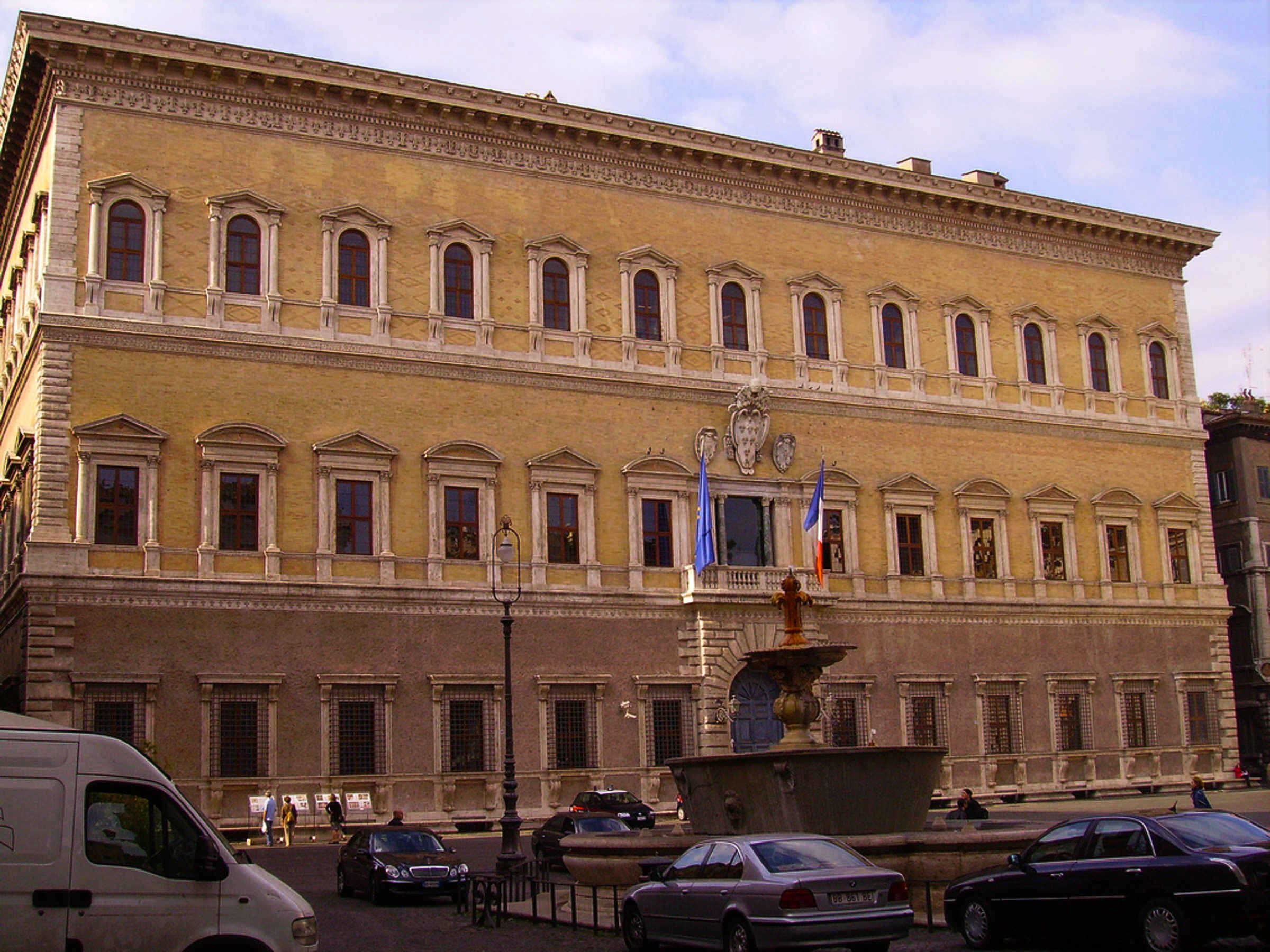 On our Bernini and Borromini, Battle in Baroque walk, there’s ample Barberini bee-spotting opportunity. Both Bernini and Borromini sought church patronage throughout their careers but it was the former who won particular favor with the Pope Urban VIII and his family. Beyond the Palazzo Barberini on Via delle Quattro Fontane, you’re sure to spot bees buzzing on one of the columns on the Pantheon and on the Fontana del Tritone, Bernini’s 1643 sculptural masterpiece. Just a few steps away at the bottom of Via Veneto, you can spot three more bees swarming on the basin of the Fontana delle Api (Fountain of the Bees), another magnificent work by Bernini. Look out for yet more buzzing around in St. Peter’s, where you’ll find them on the baldacchino that was commissioned by the Barberini pope and constructed by Bernini. What better way to make yourself remembered for all of posterity than to leave your mark on one of the most iconic Christian structures in the world?

The Barberini were certainly not the only family to propagate their crest as a device for self-advertisement. The Farnese family were another papal heavyweight who adorned many a monument and building with their floral insignia during their prominence in Rome from the 14th to 17th centuries. Hailing from central Italy, they rose through the ranks of society with a string of statesmen and soldiers. Then, the family’s place in history was set in stone when the legendary beauty Giulia Farnese had a love affair with Pope Alexander VI. This liaison assured not only Alessandro Farnese’s success at the Roman court, but also his eventual papacy as Pope Paul III in 1534.

On our Popes, Power and Parties tour, you’ll see the largest papal shield outside of the Vatican on the façade of the Palazzo Farnese. But make no mistake, although the flower of the Farnese crest bears a striking resemblance to the French fleur de lys, it is actually the Florentine lily, giglio. You can spot the elaborate emblem on top of the two fountains in the Piazza Farnese as well as the Fontana del Mascherone in the Via Giulia; the playful structure would have flowed with wine during decadent Farnese parties. 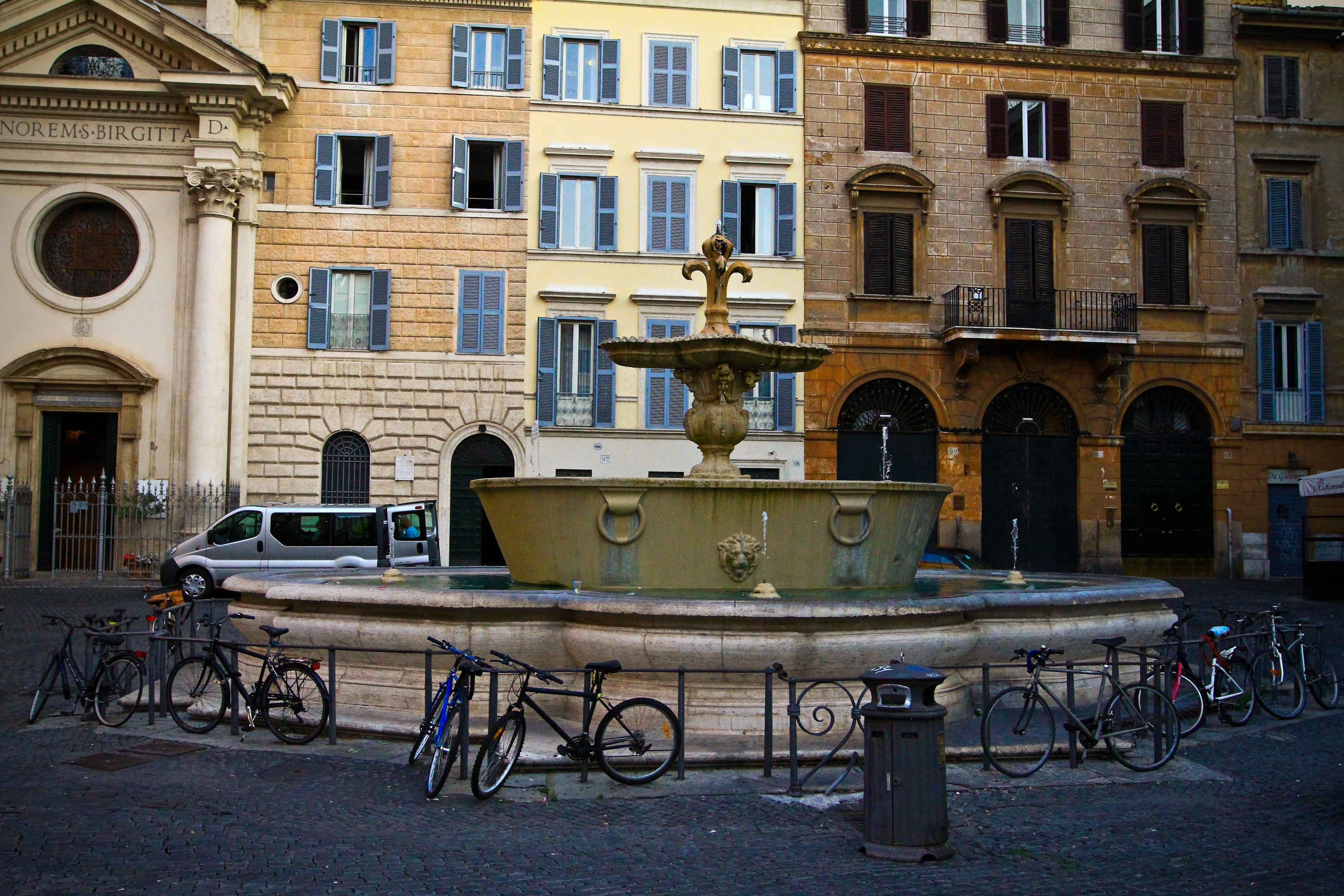 Aside from attaining physical prominence on the streets of Rome, a crest could be used to uphold the image of a family. The Pamphilj family for example, originally from Gubbio in Umbria and reached prominence with the election of Pope Innocent X in 1644, used the family crest of a dove holding an olive branch in its beak as a way to emphasize their inherent friendliness – after all, taking the Greek origin for their name— ‘pan’ meaning ‘everyone’ and ‘filios’ meaning ‘friend’—the Pamphilj were friends with everyone.

Take a stroll through Piazza Navona and you’ll see this symbol of friendship and peace on the gates outside Palazzo Pamphilj–now the Brazilian Embassy. Not far from the palazzo, these doves dot various parts of Borromini’s Sant’Agnese in Agone. When the Pamphilj family joined forces with the Doria family from Genoa in the 17th century, additions were made to the former’s palazzo on Via del Corso. Here you can spot Pamphilj doves fluttering across the building’s façade. 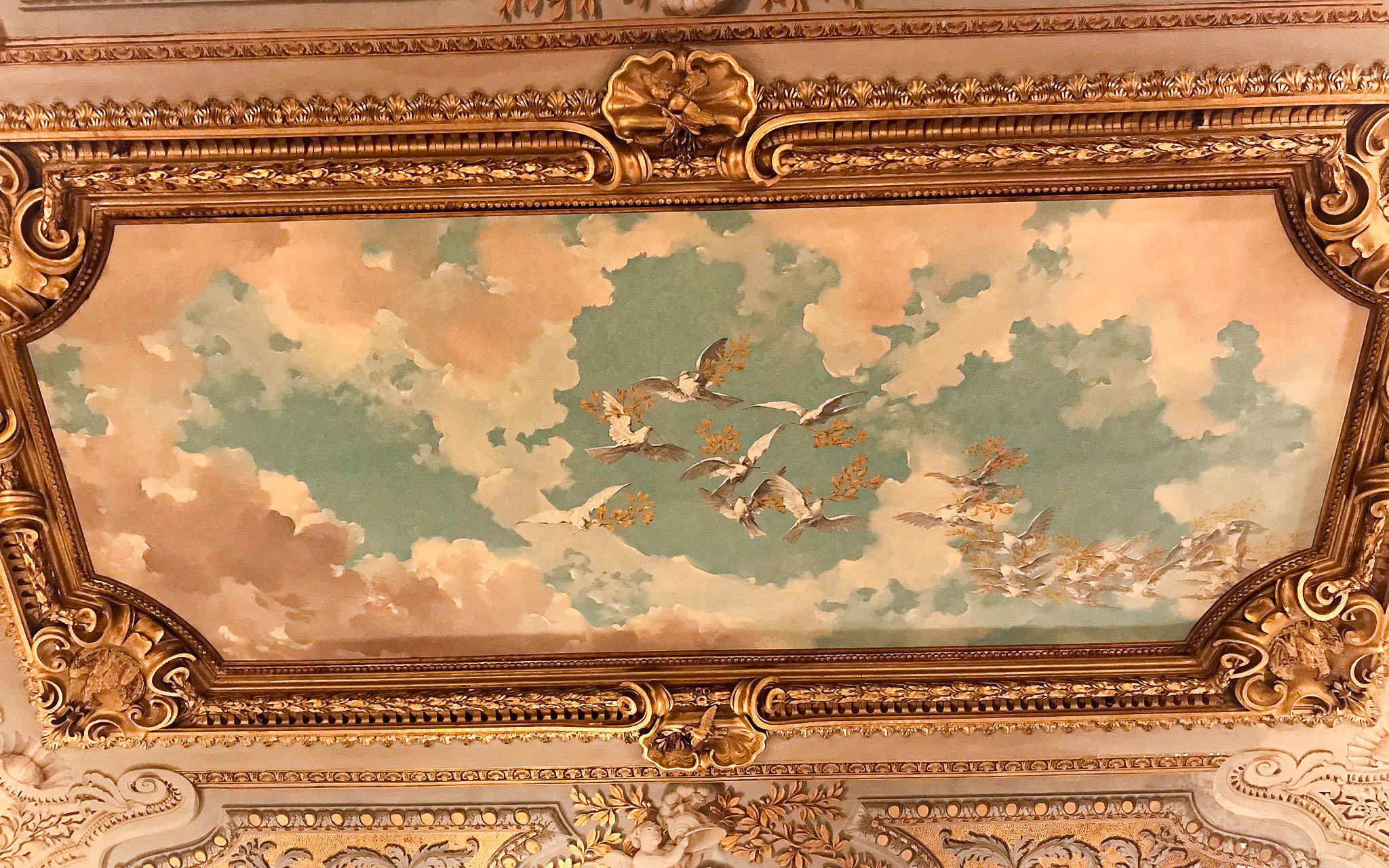 While the meaning of the Pamphilj’s dove and olive branch may be clear to most, the six mounds of the Chigi family are less readily apparent without knowing their history. However, the meaning behind their crest isn’t elusive at all—the Chigi family gained their initial fortune from the mining industry, and its crest pays tribute to that. Though humble, the family was one of the most powerful and influential in Renaissance and Baroque Italy, thanks to the ambitious Agostino Chigi (1466-1520) who financed Pope Julius II della Rovere’s papal campaign. 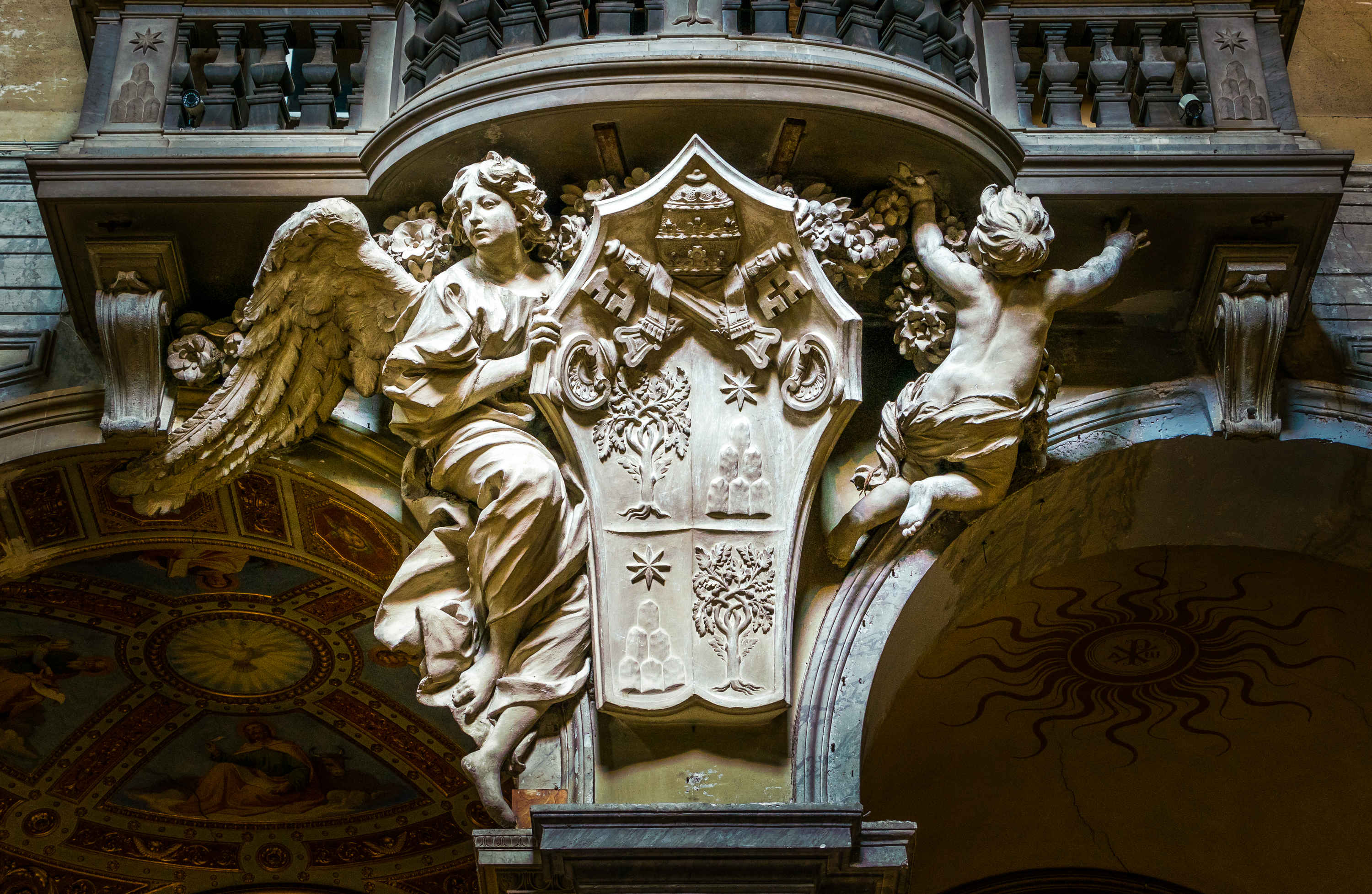 Once you know about the Chigi mounds, you’ll see them everywhere, even on one of Rome’s most unusual monuments: the elephant obelisk in Piazza Santa Maria sopra Minerva, which was designed by Bernini and sculpted by Ercole Ferrata in 1677. Here, the Chigi coat of arms has been carved onto the fabric hanging over the animal’s back. In the Chigi Chapel in Santa Maria del Popolo, you’ll find Bernini’s famous flying skeleton pushing the family coat of arms up to heaven, alongside the Latin inscription, ‘Mors ad Caelos’—death leads to heaven. How very Baroque.

Another of Rome’s papal powerhouses was the Colonna family whose coat of arms is—as their name suggests—a column. As a colossal force in Roman politics for hundreds of years, producing numerous statesmen and one pope (Martin V Colonna in 1417), the Colonna column is a regular feature on Roman architecture. The Palazzo Colonna is decorated with the crest both inside and out. You’ll find the crest on the mosaic floor of San Giovanni in Laterano, in the loggia of Santa Maria Maggiore, and beneath the 13th century mosaic donor portraits of Cardinals Giacomo and Pietro Colonna. 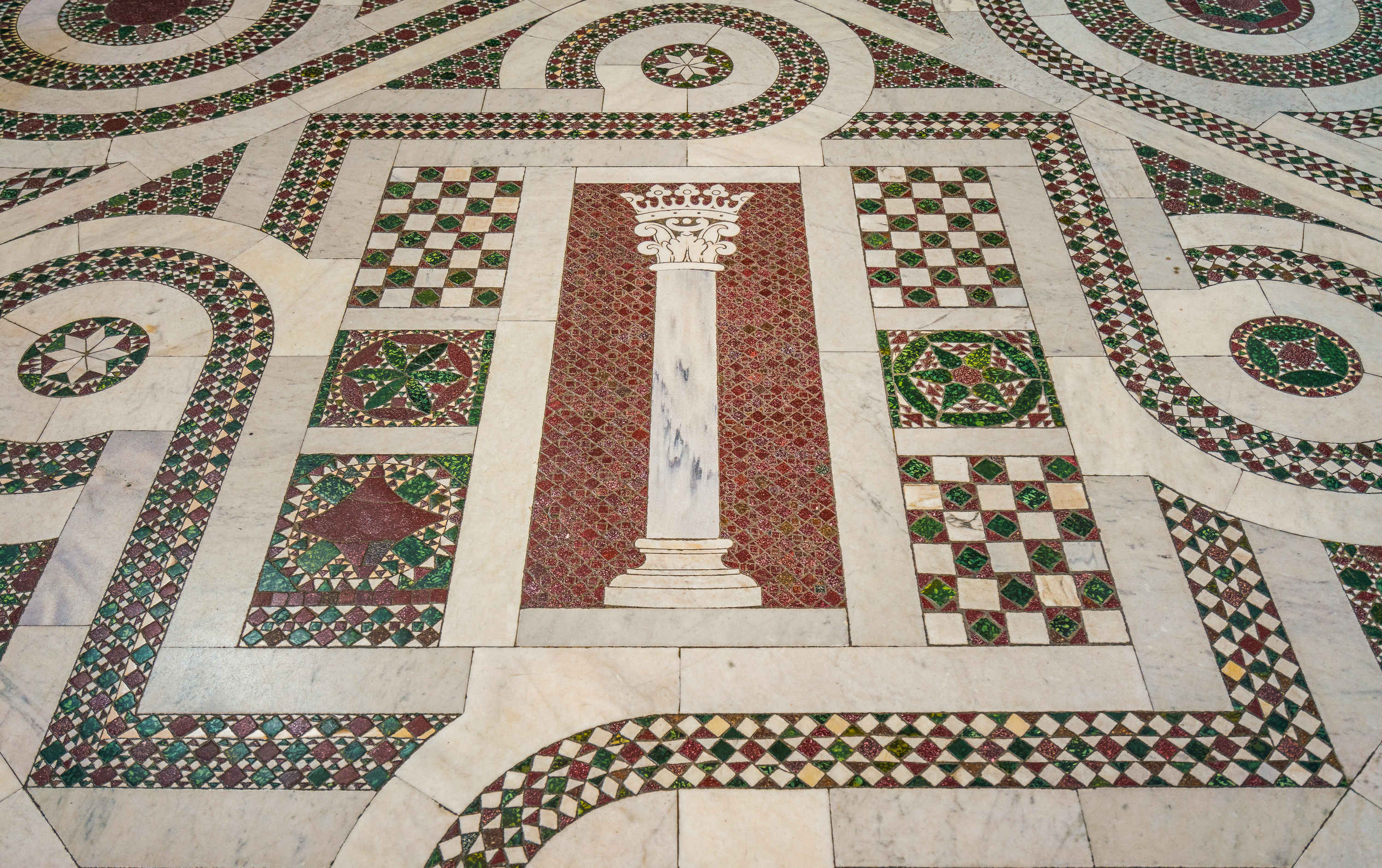 We don’t want to paint these pontifical families out to be wholly self-obsessed and egocentric (though they certainly were). However, their motivation in decorating all corners of Rome with their family insignia wasn't only an exercise in narcissism: by having their family image adorn public buildings and edifices in a heavily religious city, papal nobility were also securing their family’s salvation and access to heaven. After all, they were all too aware of the transience of life, and power, and of their own mortality, and these crests mark their virtuous contributions to the community.

Eager to spot these crests for yourself? Join us in Rome with Context tours led by PhD and MA-level guides. Want to learn with a true expert? Get a comprehensive view with one of Context's private or small group tours in Rome or travel the world from home with a virtual tour of Italy.

Travel
The Local's Guide to the Best Gelato in Rome