What Are the 7 Wonders of the Modern World?

Terraced citadels, a 98-foot statue, a grand mausoleum. The sheer ingenuity of mankind’s greatest achievements, inspired by death, survival, or the making of a bold empire, impressed the people of the past as much as they do the people of the present. A version of the Seven Wonders of the World was first compiled by Philo of Byzantium and written in 225 B.C, though only one of those ancient wonders still exists today. As of 2007, a poll conducted by a Swiss organization collected votes on what the world agreed on would be the Seven Wonders of the Modern World. The results, these well-preserved, timeless structures, deserve a visit at least once in your life. 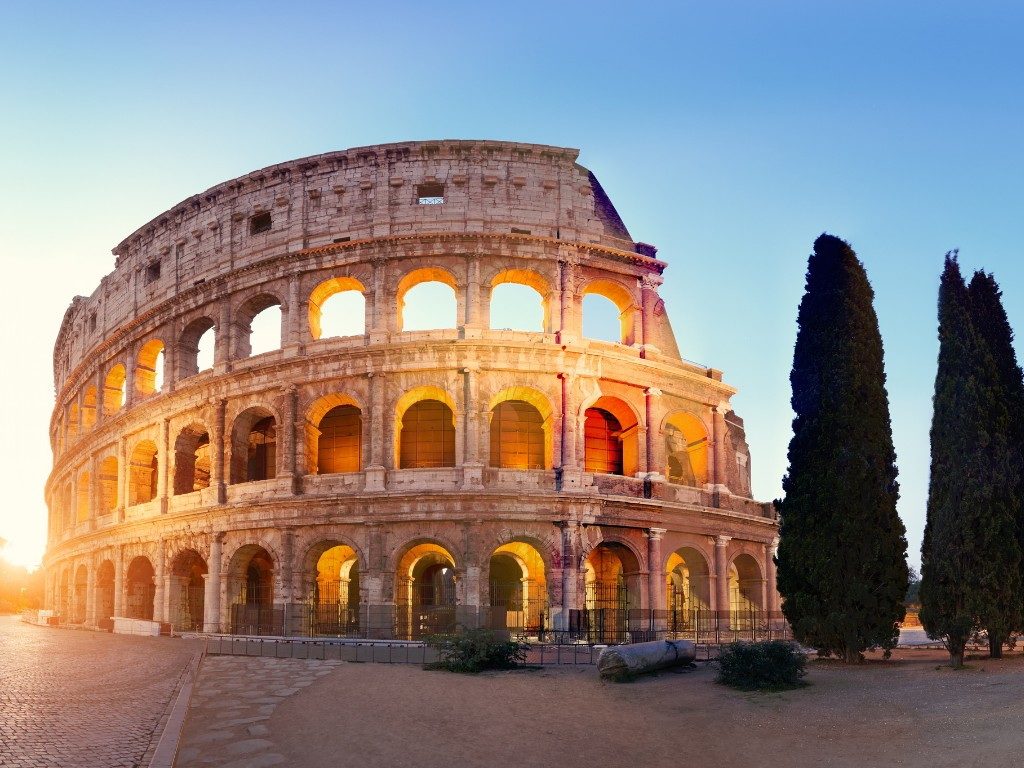 The image of ancient Rome, the Colosseum has incited awe for many from the first time we learn of its gladiator legends as children. Emperor Vespasian began constructing this marvel, but it was completed under his successor Titus in 80 AD. The amphitheater is much bigger than anyone anticipates, measuring at 620 by 513 feet. Its complex system of vaults is an engineering phenomenon in its own right and held around 50,000 gaping audience members. Gladiator battles weren’t the only spectacles that the ancient Romans enjoyed in this arena. Water was pumped into the Colosseum to practice for naval encounters, and battling animals was quite common too. While the Colosseum has weathered damage through stone robbers and earthquakes, it remains one of the most celebrated buildings in the world.

Learn more about its gruesome yet fascinating past in our tour - Rome in a Day: The Colosseum, with Context. Or you can explore Rome with Dimo, who is also an archaeologist. 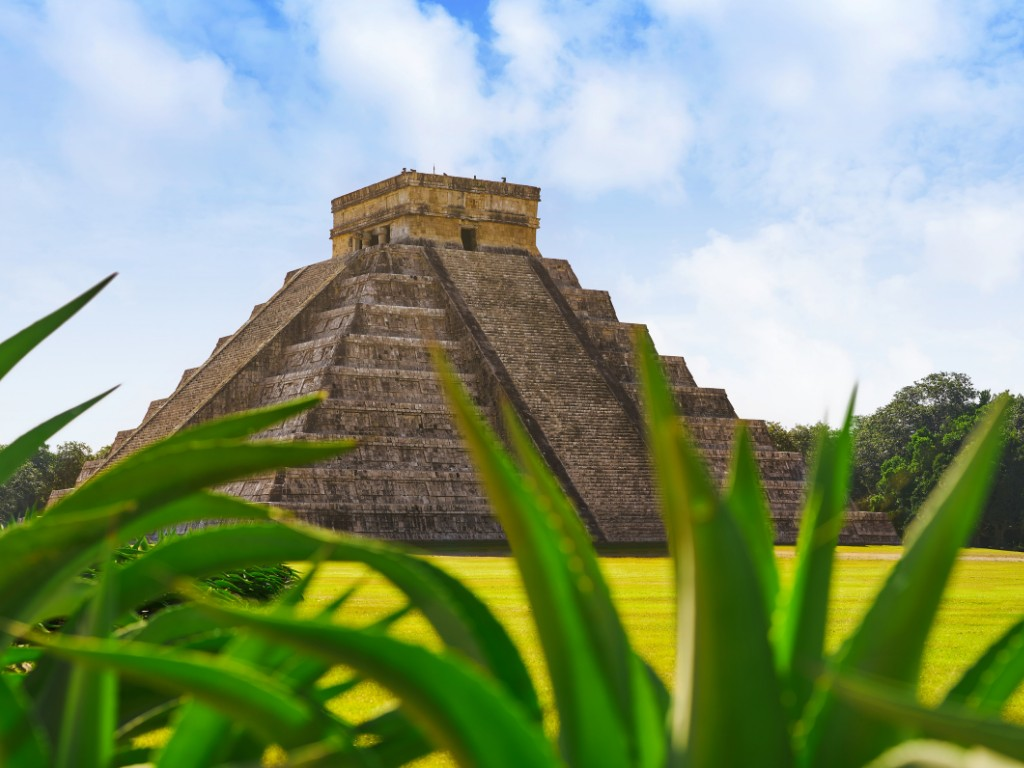 One of the most fascinating things about Chichén Itzá, an ancient Mayan city on the Yucatan peninsula, is that archaeologists are still learning more and more about the civilization on this active site. Located about 120 miles from Cancún, the old coastal capital was once a vibrant center for economic and political activity. By 600 AD, Chichén Itzá was an important commercial trading port, took up a densely packed two square miles, and had about a population of 50,000 people at its height. Of its many historic structures, the stepped pyramid of El Castillo is the city’s most popular attraction. This once religious place is also known as the “Temple of Kukulkan,” named after the Mayan deity. Other interesting archaeological findings include Las Monjas, a government building, the Great Ball Court, a sporting area, the Steam Bath, a bath and steam chamber using hot stones, El Mercado, the city’s marketplace, and so many other sites and streets that would make the long-dead civilization very much alive and recognizable to you. 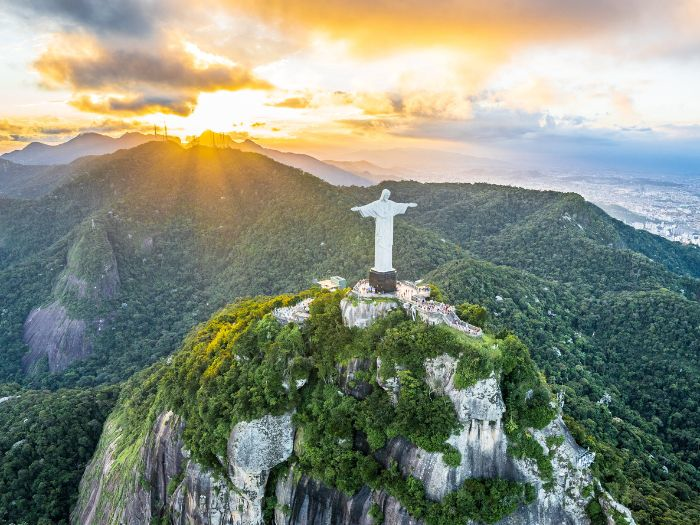 Completed in 1931, the whopping Christ the Redeemer statue in Rio de Janeiro was more recently erected than any of the other Seven Wonders. However, the first inklings of creating a Christian statue to sit atop Mount Corcovado occurred around 1850 to honor Princess Isabel, but the original project was rejected. Post-World War I, Catholics in Brazil feared that there was a societal wave of “godlessness,” so Catholic organizations pooled donations and garnered support for what would be the largest Art Deco sculpture in the world to date. This striking monument is composed of concrete, uses almost 6 million tiles, and stands at 98 feet. As if Christ’s colossal figure isn’t godly enough, the statue often attracts lightning, chipping Jesus’ right thumb in 2014 (though this wouldn’t be the first time Jesus’ representation would be damaged in art).

4. The Great Wall of China 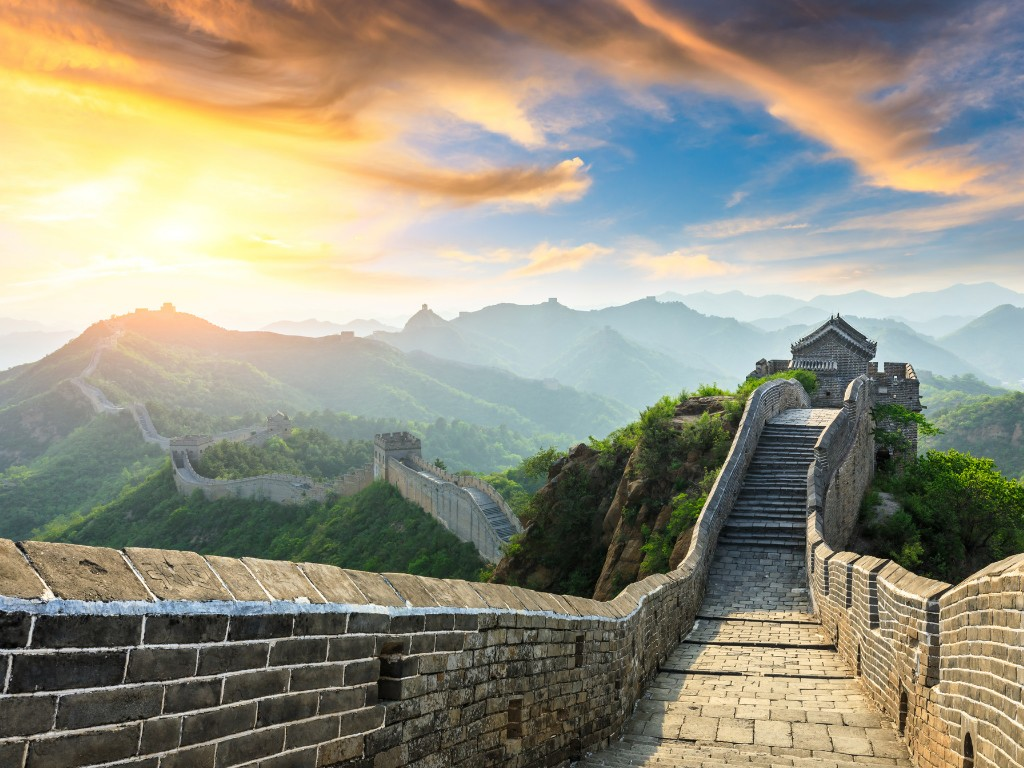 The Great Wall of China is a powerful symbol of the country and of globetrotting in general. While the Qin Dynasty first began revitalizing the existing wall structure in 220 BC, its origins date from before 5th century BC. Sure enough, Emperor Qin Shi Huang built the expansive barrier to prevent invasion and warring, but the wall failed to provide any kind of protection against oncoming enemies. In fact, the arduous labor that went into the feat took almost 400,000 people, many of which were buried inside the wall forever! Today, we can enjoy China's great barricade as we know it due to the hard work of the Ming Dynasty, who made vast improvements from the 14th to the 17th century. Over time, from emperor to emperor and dynasty to dynasty, some historians believe that the wall’s purpose might have evolved to be used more for propaganda than for actual safety. For whatever the motivation, the over 13,000 majestic miles of ingenious fortification have stunned enemies, kings, nomads, and travelers alike for centuries. 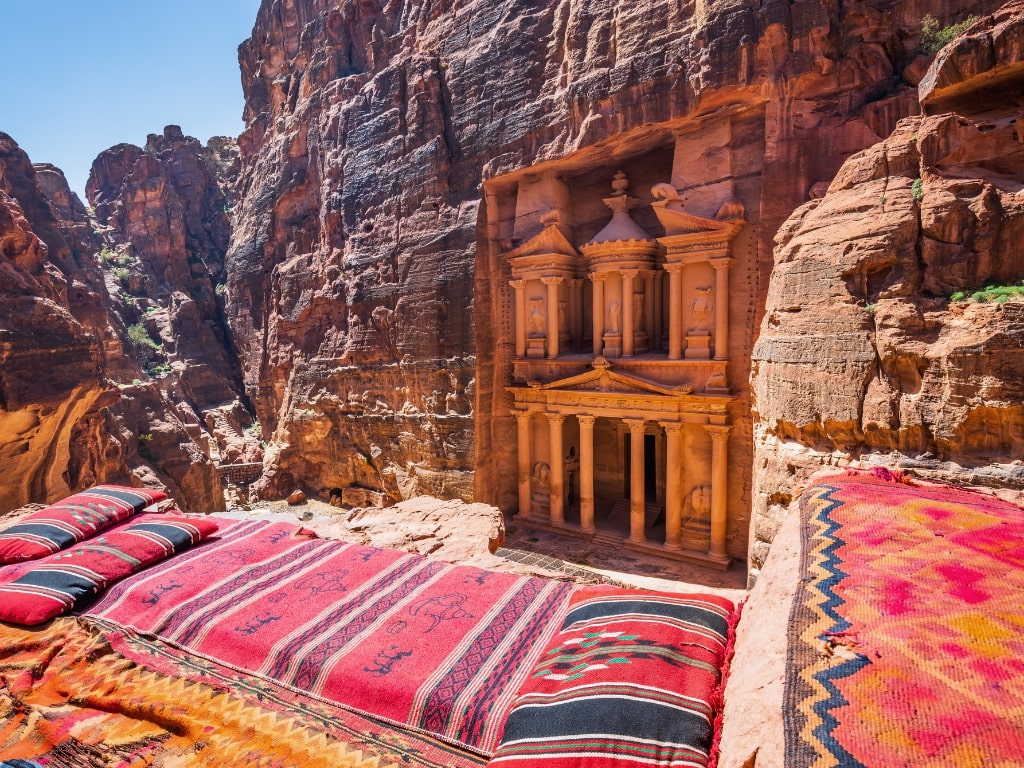 Nestled in a valley of sandstone cliffs, Petra’s beauty is owed to its otherworldly, almost sci-fi quality. It’s hard to believe that this ancient city doesn’t just live in someone’s imagination. With its reddish, orange clay hues and dwellings carved right into the mountainous sandstones, Petra makes the perfect setting for the biblical and Judaic stories that preside here. It is said that the ancient city was where Moses struck a rock from which water burst out. Around 300 BC, an Arab tribe known for their impressive chiseling and carving skills, the Nabataeans, settled on this important site and made it their capital. Like Chichén Itzá, the area flourished, especially economically due to its role in trade. They left valuable insights into their civilization, like the breathtaking rock-cut monuments, watering systems, tombs, and other buildings. Petra was largely abandoned over time, after changing trade routes, a series of earthquakes, and finally the Crusades. It was only rediscovered in 1812 by Swiss traveler Johann Ludwig Burckhardt. We’re learning more about the mysterious city every day at this wondrous archaeological site. 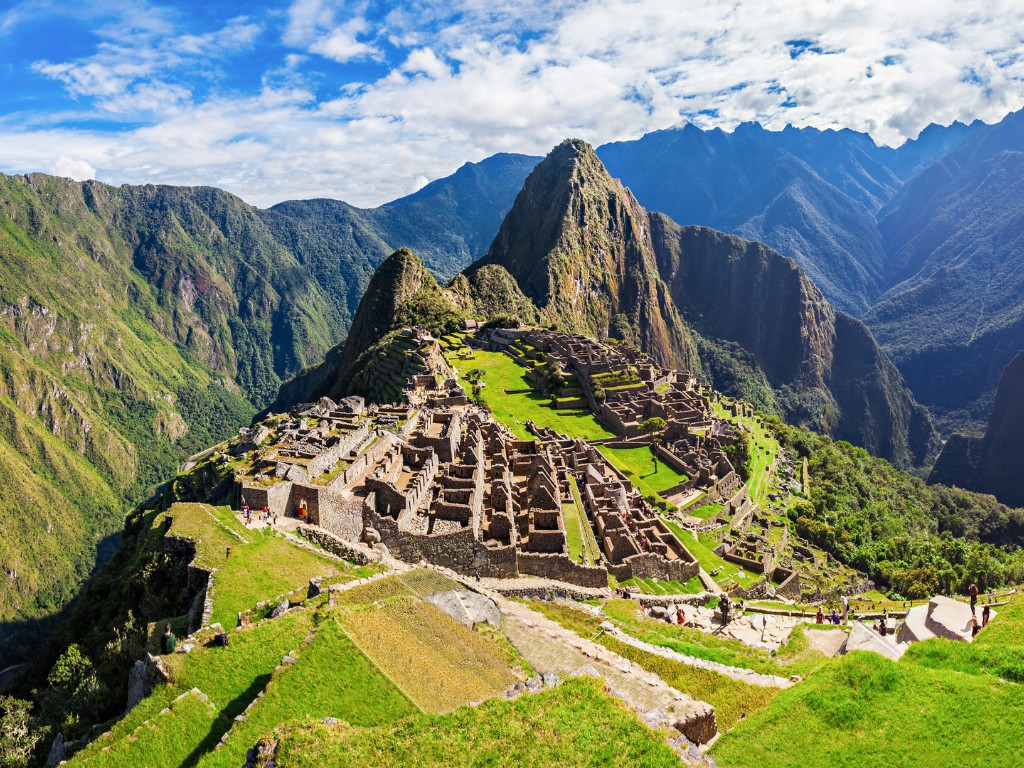 How adventurous it is to think that modern archaeologists just happened on the fortifications or dwelling-places of these once-dominant empires. Like Petra, the Incan citadel of Macchu Picchu was “discovered” fairly recently in 1911 by Hiram Bingham, though indigenous tribes have been using the site and some have happened upon it earlier too. Bingham first believed that Macchu Picchu was the secret city of Vilcabamba, but that was disproved after further excavations. What archaeologists found was a vast empire full of innovative engineerings like using terracing for agricultural purposes and carved stone to connect plazas, dwellings, and other major parts of the fortification. Researchers still don’t know exactly what Machu Picchu was used for. Perhaps it was a retreat for the high classes or an estate for the emperor Pachacuti. These are the prevailing theories since the remains found at Machu Picchu were from all over Peru — those that died here did not live here based on their short-term diets and parasites found on the bodies from other parts of the country. Even the animals on the stronghold were not native to the mountain. In any case, the extremely well-preserved temples, terraces, plazas, and residences are a testament to the advanced society that occupied the mountain in the 15th century. If you're lucky, you can learn more in a seminar on Macchu Picchu (or even Peruvian culture or trip planning)! 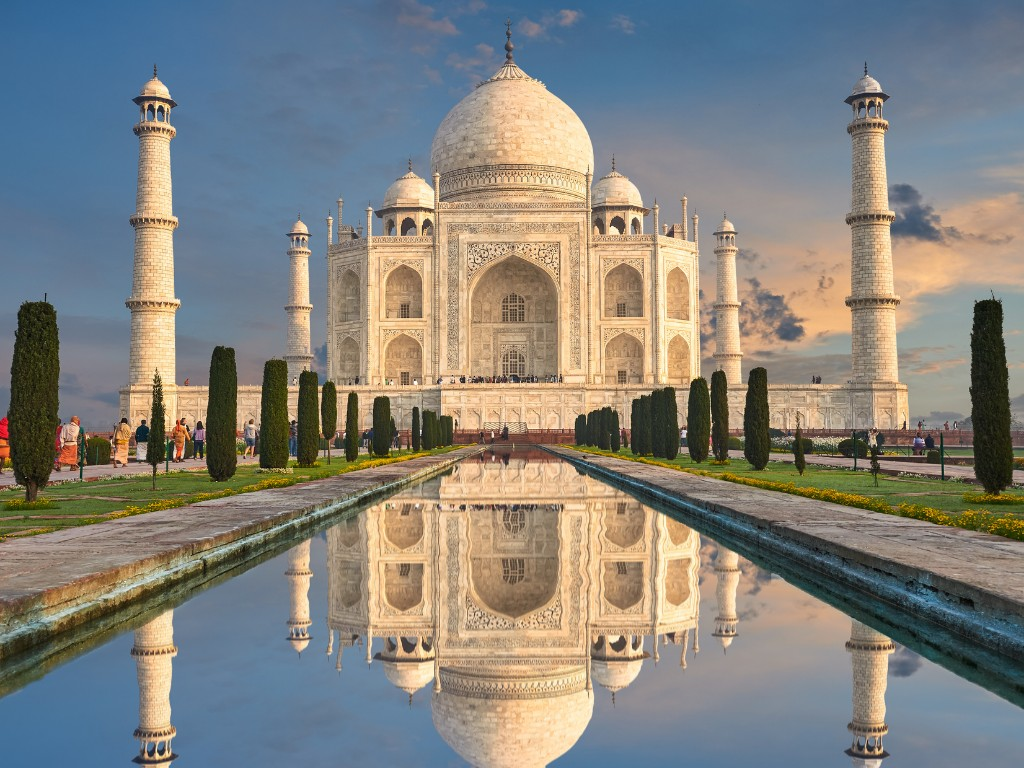 The power of love can really drive us to do the most bewildering things. An astonishing example of Mughal architecture, the Taj Mahal was built by Emperor Shah Jahan for his wife to be buried in after she died in 1631 delivering their 14th child. The mausoleum is far more than just a burial ground. Set aside the Yamuna River, the expansive site also includes a garden, a reflecting pool, and a museum. The entire endeavor took about 20,000 men and 22 years to complete. But that wouldn’t matter to Shah Jahan whose wife, Mumtaz Mahal, was near and dear to him. Despite being married to two other women, Shah Jahan had a deep affection for Mumtaz and had no interest in pursuing his other marriages past their political significance. Shah Jahan wanted to commemorate his most trusted companion with a harmonious and grand architectural complex, a splendor that could capture how the emperor felt toward his beloved Mumtaz. While he planned to be buried across from his wife in his own mausoleum made of black marble, Shah Jahan was deposed by his son Aurangzeb in 1658 and then imprisoned for the rest of his life. Love at its best and its worst, the Taj Mahal’s history is as incredible as the mausoleum itself.

Seven Wonders of the Modern World in Context

The Seven Wonders of the Modern World, when synthesized together, tell the story of a not-so-distant people. While the ancient settlers might be long gone, the tales of civilization are familiar. Places for worship, battle, and sacrifice. Monuments for love, spirits, and God. Fortifications for empire and glory. These are all spaces that tie us together through time and space, a need to preserve and ritualize the things we care about. The Seven Wonders of the Modern World not only give us a look at humankind’s greatest capabilities but also insights into ourselves today.

What Are 7 Wonders of the Ancient World?