Where to Spend Christmas in Italy

Winter is an ideal time to visit Italy. Not only are there fewer tourists and shorter wait times at the museums and monuments, but there are many unique festivities and traditions only found this time of year. The Christmas season lasts from December 8th, the date of Immaculate Conception of Mary, to January 6th, the day of the Epiphany.

For Italians, Christmas festivities focus on the family; locals head to their hometowns to celebrate with loved ones. Meanwhile, light displays and Christmas markets pop up throughout the country. While spending the holidays in the spiritual home of Catholicism (or just a more temperate climate) sounds appealing, it can also be a bit daunting. That’s why we’ve put together this guide of our favorite places to spend Christmas in Italy, and what to do when you’re there.

For those of you looking for further Italy immersion ahead of a potential trip, check out Context Conversations online seminars and virtual tours of Italy for more inspiration.

But first, here are a few of the traditions we think are most important no matter where you spend Christmas in Italy:

Traditions and Foods Not To Miss

The presepe is the tradition of Christmas nativity scene displays, found in most cities in Italy. The word refers specifically to the crib, first created by Saint Francis of Assisi in 1223 CE. In Rome, the annual 100 Presepi exhibition displays about 200 nativity scenes from artists across Italy and other countries. Rome also houses the Museo del Presepio “Angelo Stefanucci”, which displays over 3000 presepi, made from a wide range of materials including plaster, glass, and even eggshell, and a life-size nativity scene is displayed annually in Saint Peter’s Square. The presepe at Santa Maria Maggiore is said to be the oldest permanent nativity scene, carved in marble by Arnolfo di Cambio in the late 13th century. (See this tradition with a theology scholar on a Context holiday nativity tour.) In Florence there is a life-size presepe outside the Duomo, made in terracotta by an artisan in Impruneta.  The monastery of San Martino in Naples houses a unique collection of presepe figurines unlike any other collection and is well worth a visit.

To prepare and purify their bodies, Italians forgo meat on “La Vigilia” (Christmas Eve) before heading to midnight Mass. Then, on Christmas Day, families host a large lunch—which lasts all day—featuring traditional dishes like pasta in brodo (pasta cooked in stock) and panettone (a sweet bread with raisins).

New Year’s Eve coincides with the Festa di San Silvestro in Italy, and is traditionally a time to both literally and figuratively throw out the past. At midnight, people throw kitchenware, appliances, clothes, and furniture out of their windows onto the street, a tradition most common in the southern part of the country. The day is celebrated with a big dinner called Il Cenone, featuring lentils right after midnight; the money shaped food is thought to bring good luck.

A slightly less expected tradition in Italy is the wearing of red underwear, referencing the medieval belief that red wards off sickness and bad luck. Italians are so passionate about this tradition that red underwear can be bought all across town, and if a friend hears you do not have any, they will likely gift you some! Of course, fireworks, music, dancing, spumante, prosecco, and festivities are equally important.

Families most often exchange gifts on the day of the Epiphany (though this varies by region), and also host another large dinner. Children are then visited by La Befana, a woman with a crooked nose and broomstick. Despite her appearance, La Befana is not a witch; she visits at night, bringing along stockings filled with sweets. In original lore, she would bring an oranges and coal for good and bad children respectively. She is not to be confused with Babbo Natale, the Italian equivalent of Santa Claus: La Befana forgoes the milk and cookies, opting instead for a hearty bottle of red wine as her treat.

Where to Spend Christmas in Italy: Rome

In Rome, most major tourist sites are still open daily except for Christmas and New Year’s Day. (The Vatican is also closed in the afternoon of Christmas Eve and New Year’s Eve.) From late November to early January there is a large Christmas market in Piazza Navona; however, it’s become quite touristy and lacks the authentic traditions of an Italian market. For a more typical, local experience, head to Piazza Mazzini.

Have a walk through Piazza Barberini as well, where an enormous menorah stands during Hanukkah, and on Christmas Day, be sure to head over to the Vatican to hear the Pope’s Christmas message while standing beside the massive Christmas tree erected there. There will also be a huge Christmas tree in Piazza Venezia and Christmas lights all around the historic center neighborhoods.

In the evenings, relax with hearty Roman winter dishes like pasta e ceci (pasta and chickpeas). You can also sample some of our favorite Roman Christmas treats in our Taste of Rome holiday tour.

For those looking to attend Mass at the Vatican, it’s also important to note that “Midnight Mass” at the Vatican is now at 10pm, at the request of the Pope a few years ago.

New Year’s Eve brings a large public celebration in Piazza del Popolo with music, dancing, and fireworks. There are also live music performances and fireworks on Via dei Fori Imperiali by the Colosseum; and on several bridges in Rome, there are outdoor dance parties. On Epiphany, the Santo Bambino is paraded down the church stairs, after having been in the presepe at Santa Maria Aracoeli since Christmas Eve.\

Ahead of a visit to Rome, explore Context Conversations online seminars and virtual tours of Italy for anything from Bernini, to the Sistine Chapel, to a cacio e pepe cooking class.

Where to Spend Christmas in Italy: Florence

The holiday season in Florence is packed with festivities. You can sit back and relax while watching a Christmas choir perform the Nutcracker, head over to Piazza Santa Croce to get some last-minute shopping done at the German Christmas Market, or design a mix of both on one of our custom tours of Florence. 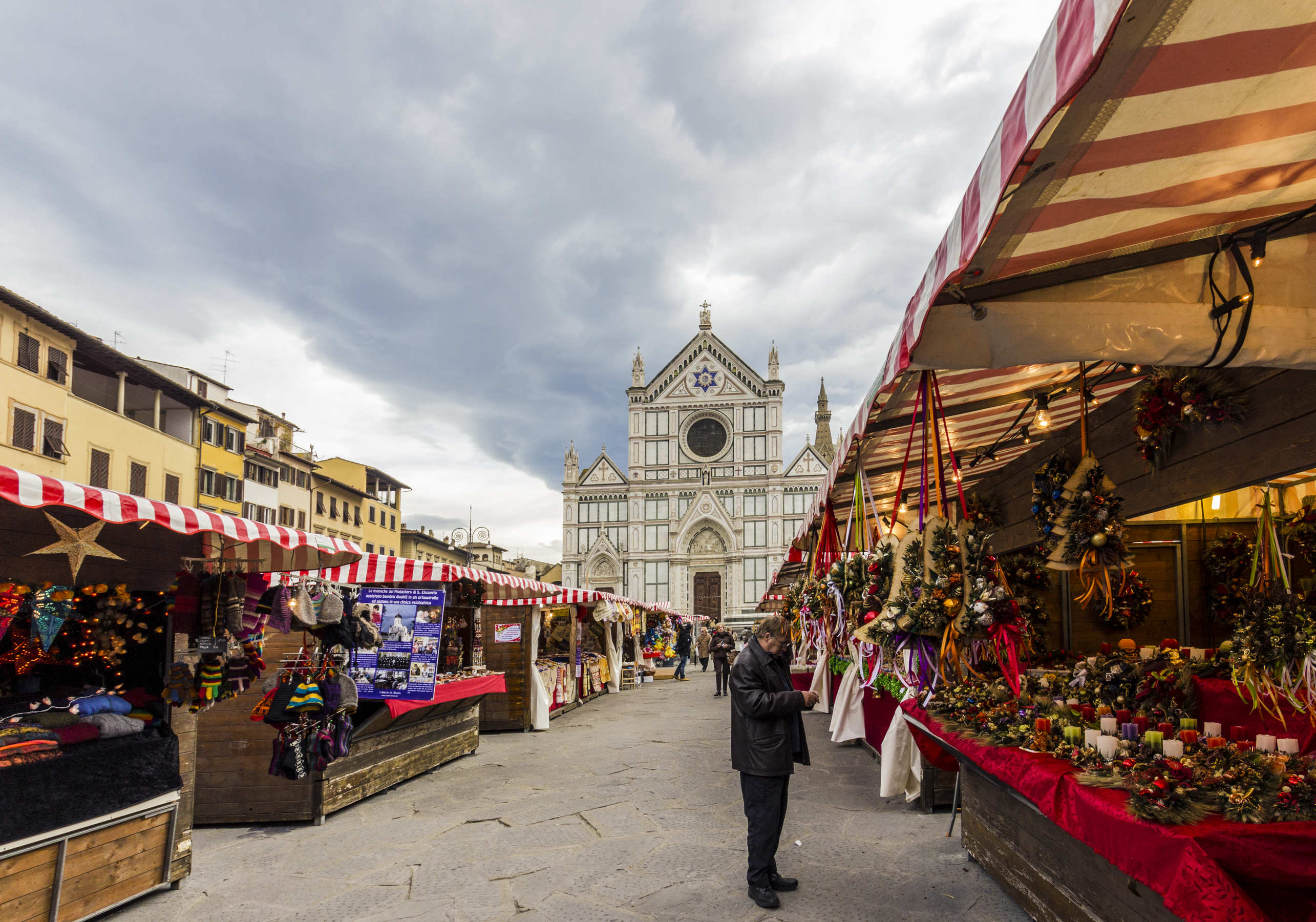 Be sure to try a slice of panforte, the Tuscan version of the Italian holiday treat panettone. There are several other markets and fairs including the British Institute Christmas Fair, and the Emergency Christmas Shop. Or, see the Lighting of the Menorah at the synagogue Tempio Maggiore.

New Year’s in Florence is marked by public concerts in Piazza della Signoria and Piazza della Repubblica, and Epiphany is celebrated with the Cavalcade of the Magi through the historical center, evoking the journey of the Magi to baby Jesus, with participants dressed in traditional costume.

Where to Spend Christmas in Italy: Milan

Milan doesn’t often cross many minds when thinking where to spend Christmas in Italy. It can get quite cold during the winter months, so much so that the Duomo roof can be closed to the public due to ice; however, there is still lots to see and do this time of year.

In early December the city celebrates its Patron Saint with the Festa di Sant’Ambrogio, and local food, drink, arts, and crafts can be found in the Christmas Market near the Duomo. The city’s proximity to the Alps make it an ideal ski location as well, with hills for a range of abilities. There is a large Christmas tree in Piazza Duomo, and O Bej, O Bej market near Castello Sforzesco. (The name derives from the Milanese dialect and translated to “how nice, how nice.”) There’s also the traditional lighting of a large menorah in Piazza San Carlo.

Check out Context Conversations to see our Milan seminars and courses. Pop to some of the best museums, peek inside the duomo, and marvel at the Last Supper.

Where to Spend Christmas in Italy: Naples

Naples, along with Rome, is one of the mildest cities during the Italian winter, with temperatures around 50 degrees F. That said, it does rain quite often, so indoor activities such as museums and royal palaces are ideal attractions for this time of year. If you're up to braving the rain, a trip to Pompeii is well worth it, as the crowds have thinned enormously from their summer peak.

Naples is famous for its presepi (nativity scenes), with hundreds erected across the city. The Museo Nazionale di San Martino has a collection of presepi dating back to the 1800s, and Via San Gregorio Armeno hosts a market dedicated to them. (Though the street is so crowded during the holiday season that it becomes a one-way pedestrian thoroughfare). You can see the best of the Naples holiday scene on our Neapolitan Christmas Traditions tour.

Neapolitan holidays would not be complete without its food traditions, such as struffoli (cooked dough coated in honey and sprinkles) and roccocò (hard biscuits). 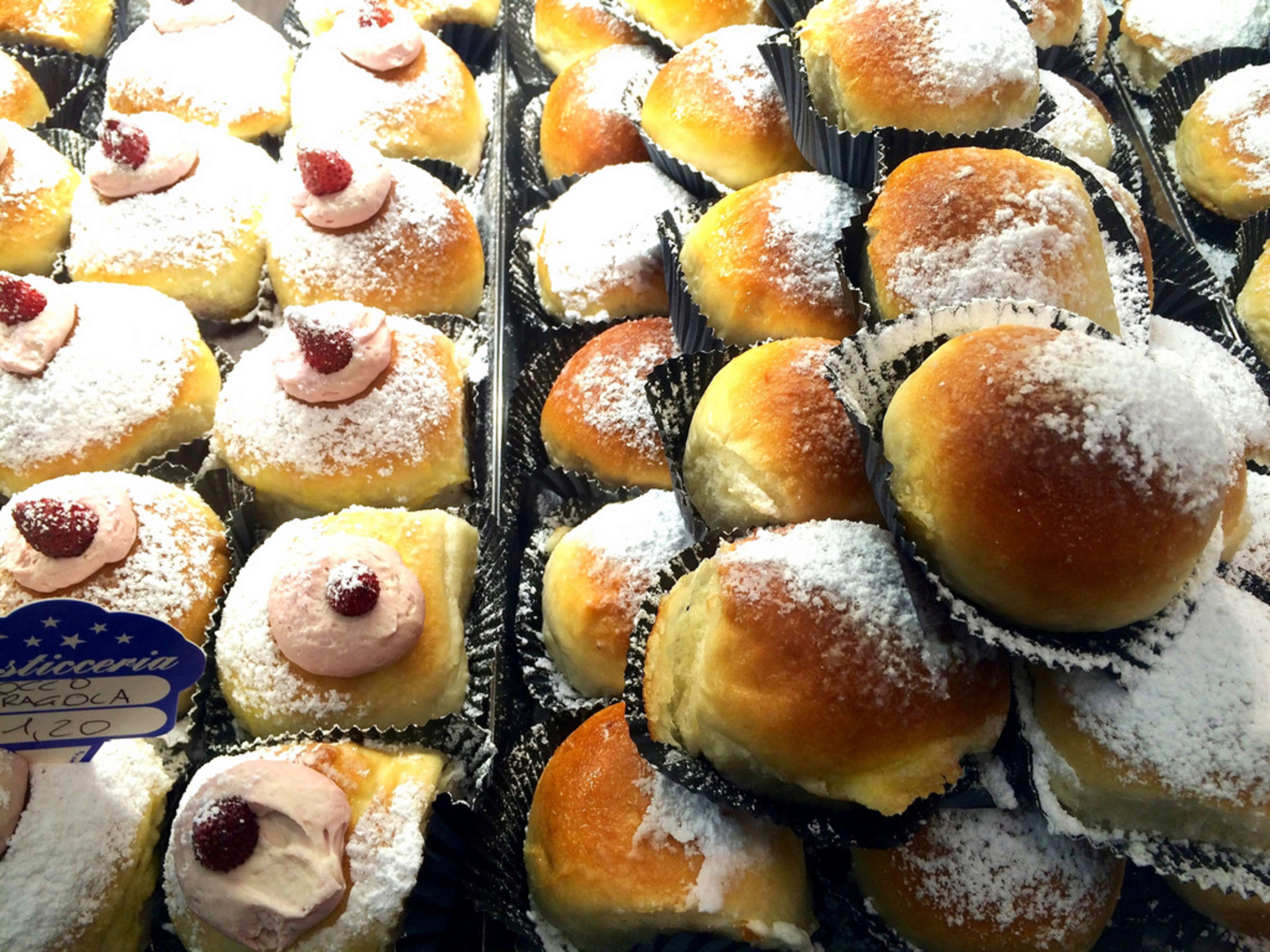 New Year’s Eve in Naples includes a huge outdoor music event and fireworks in Piazza del Plebiscito, and groups of amateur musicians and children sing from house to house in a tradition called Lo Sciascio.

Where to Spend Christmas in Italy: Venice

Christmas in Venice is a beautiful affair—during the holiday season, the customary fog makes the buildings look as though they are floating on clouds. There are several Christmas markets, such as Natale in Laguna at Campo Santo Stefano. Santa Claus can at times be seen running around on stilts, alongside a companion in Carnevale dress.

Another highlight is Natale di Vetro (Christmas of Glass) on Murano Island—the event features spectacular glass decorations including a 20-foot-tall glass Christmas tree. Campo San Polo houses a skating rink and small Christmas market, of course including carnival masks. The Ghetto Square hosts many Hanukkah celebrations including the lighting of the menorah, music, dancing, and food.

New Year’s in Venice has music, fireworks, Bellini Brindisi (a toast), and a giant group kiss at midnight. On New Year’s Day the Italian version of the “polar bear swim” takes place, with locals jumping into the water at Lido Beach.

And the festivities don’t stop there. Later in January, Venice comes alive for Carnevale. The entire city is bustling during these days with boat parades, dancing, music, and countless costumed participants. The Flight of the Angel is the signature event, striking in both its cultural and historical significance, and in its wow-factor. The other two main highlights of the event are the Official Dinner Show and Ball, costing about 500 euros, and the costume contest in Piazza San Marco.

Want to learn with a true expert? Get a comprehensive view with one of Context's private or small group tours in person in Italy! If you're planning and preparing for an eventual trip, learn with our scholars online in the world of Context Conversations ahead of packing your bags.