Journey Beyond Rome and Venice - Ciao Arezzo, Bologna, and Ferrara

Most travelers, when preparing for a trip to Italy, focus their planning on the bucket list-worthy triumvirate of Rome, Florence, and Venice overlooking some lesser-known gems they will zip past on the way from one blockbuster city to the next. Rome to Venice via Florence (or vice versa) is a tidy trip, neatly connected by high-speed rail and convenient autostrada routes, so it is clear to see why vacationers are swayed by the easy logistics and top 10 list art historical treasures when allocating days and nights to their stay in Italy.  But, with a few quick deviations from the heavily traveled trail across the peninsula, treasures abound and the crowds disappear. In our humble opinion, we think this is one of the best Italy road trips that the curious traveler can make.

Leaving the intoxicating chaos of Rome behind you, say goodbye to the Piazza Navona, the Colosseum, and the Sistine Chapel as you head towards Florence.  The mighty A1 highway, the Autostrada del Sole, shoots you north, cutting through Tuscany with sweeping views of cypress trees and rolling hills in every direction.  The oldest highway in Europe, the A1 was designed to connect Milan to Naples and unite Italy by car in the 1950s.  With one quick exit and a few minutes of easy driving, Arezzo awaits. Welcome to your first stop of the Italy road trip.

Once an important Etruscan enclave and then Roman outpost, Arezzo grew into a powerful city-state in the early Renaissance period. No match for the mighty Medici, however, Arezzo was subsumed into the Grand Duchy of Tuscany in the 1300s. It was during this period that Piero della Francesca was commissioned to paint his breathtaking frescos in the church of San Francesco.  Restored in 2000 after nearly 15 years of painstaking work, the results rival the more famous Renaissance fresco cycles in nearby Florence.  Telling the Legend of the True Cross, the frescoes can be viewed by a limited number of visitors at a time, by reservation. 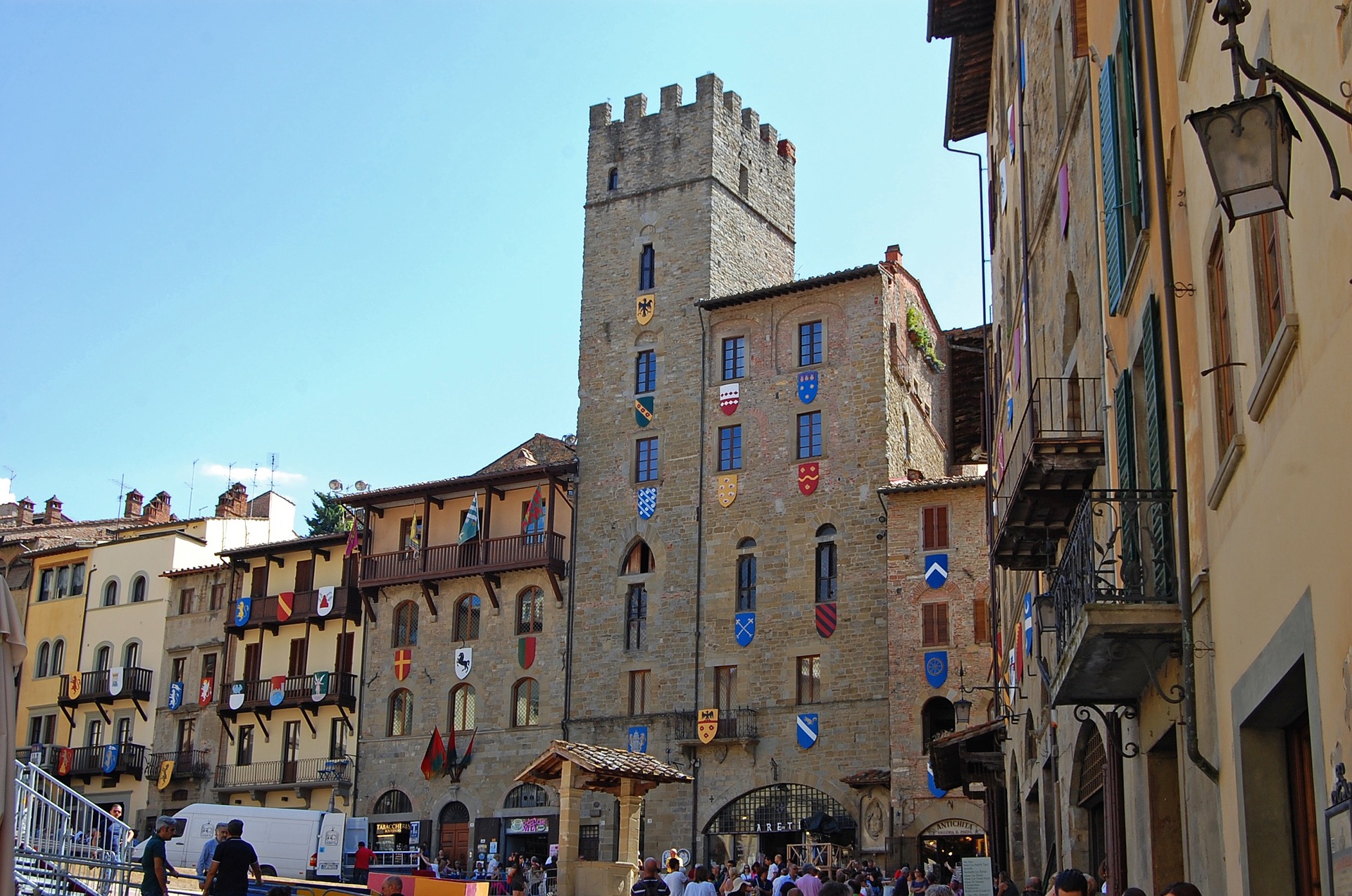 Ciao Arezzo
If Piero della Francesca sparks your curiosity, you can continue on a veritable quest around the area to see more examples of his works: set your GPS for nearby Monterchi and you will not regret a side trip to this outlying hamlet to see the remarkable La Madonna del Parto fresco, one of the very few representations of the Virgin Mary pregnant.  Painted in the village church where his mother worshipped, the patron of this work is uncertain but its importance in Renaissance painting is clear.  The newly created museum allows visitors to dig into the mathematical proportions as well as the significance of the subject.  Continue the Italy road trip on to Piero della Francesca’s birthplace in San Sepolcro even more examples of his work and imagine his life in this enchanting corner of Tuscany. 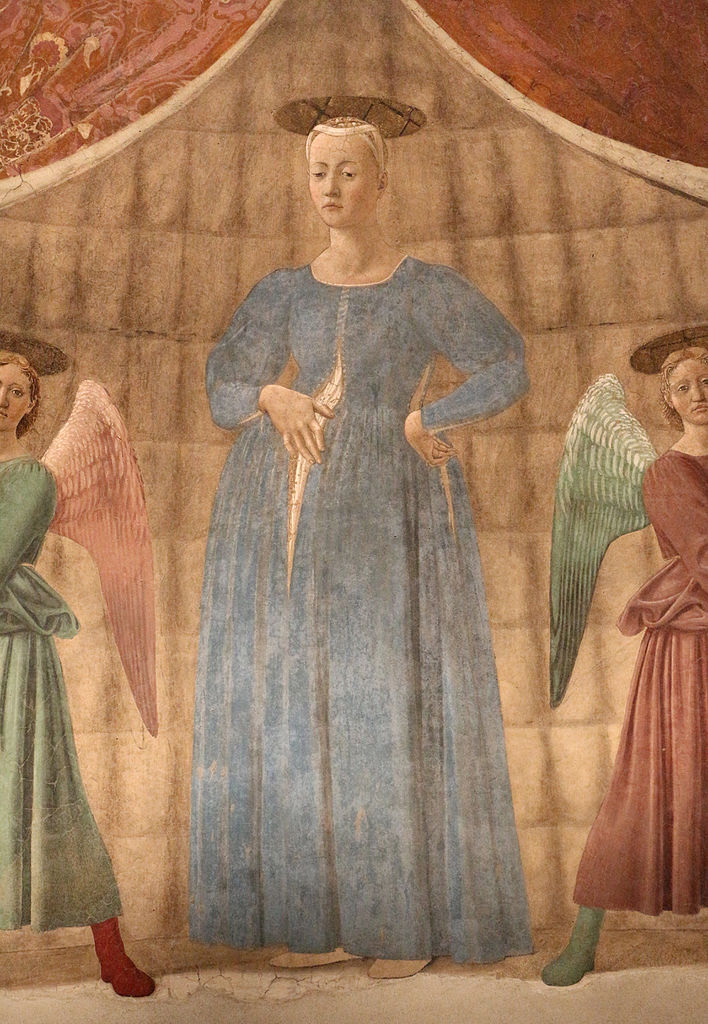 If you time your trip correctly and land in Arezzo on the first Sunday of each month, you can browse the extensive Antique market with vendors from all over central Italy.  The gently sloping cobblestone streets (and the Piazza Grande) are lined with curiosities collectible for all budgets.

If Renaissance frescoes and antiquing are not for you, the Italy road trip continues on the A1 (or catch a speedy “Freccia” train from Florence) north to Bologna.  Getting between Bologna and Florence is a breeze: many travelers prefer to sleep in Bologna’s competitively priced 4-star hotels and visit Michelangelo’s David and the Brunelleschi’s Duomo as a day trip rather than fight the crowds and higher prices in Florence.  Bologna’s charming “centro storico” is flush with art, history and, of course, delicious treats for the weary traveler: since it is less frequented, you will experience Italian life more akin to a local than a tourist.

Closer in size to Florence than to Rome, Bologna is a thriving economic hub of Italy; the city’s wealth shows in its well preserved historic buildings and churches, famous for its red-tiled rooftops.  The capital of Emilia-Romagna, Bologna is lovingly known as “La Grassa” signaling the general abundance of the place, but more specifically the plentiful gastronomic delicacies that make up its rich culinary history (be warned:  you will be a bit grassa, too, after a few days in this town!)  As you traverse the avenues lined with “portici” or loggias that protect window shoppers from inclement weather, you can marvel at the array of tortellini from rival shops Paolo Atti & Figli and Tamburini or admire the artful displays of Mortadella and Prosciutto on every block. With over 38 kilometers of covered walkways, you can stroll for days protected from the elements. 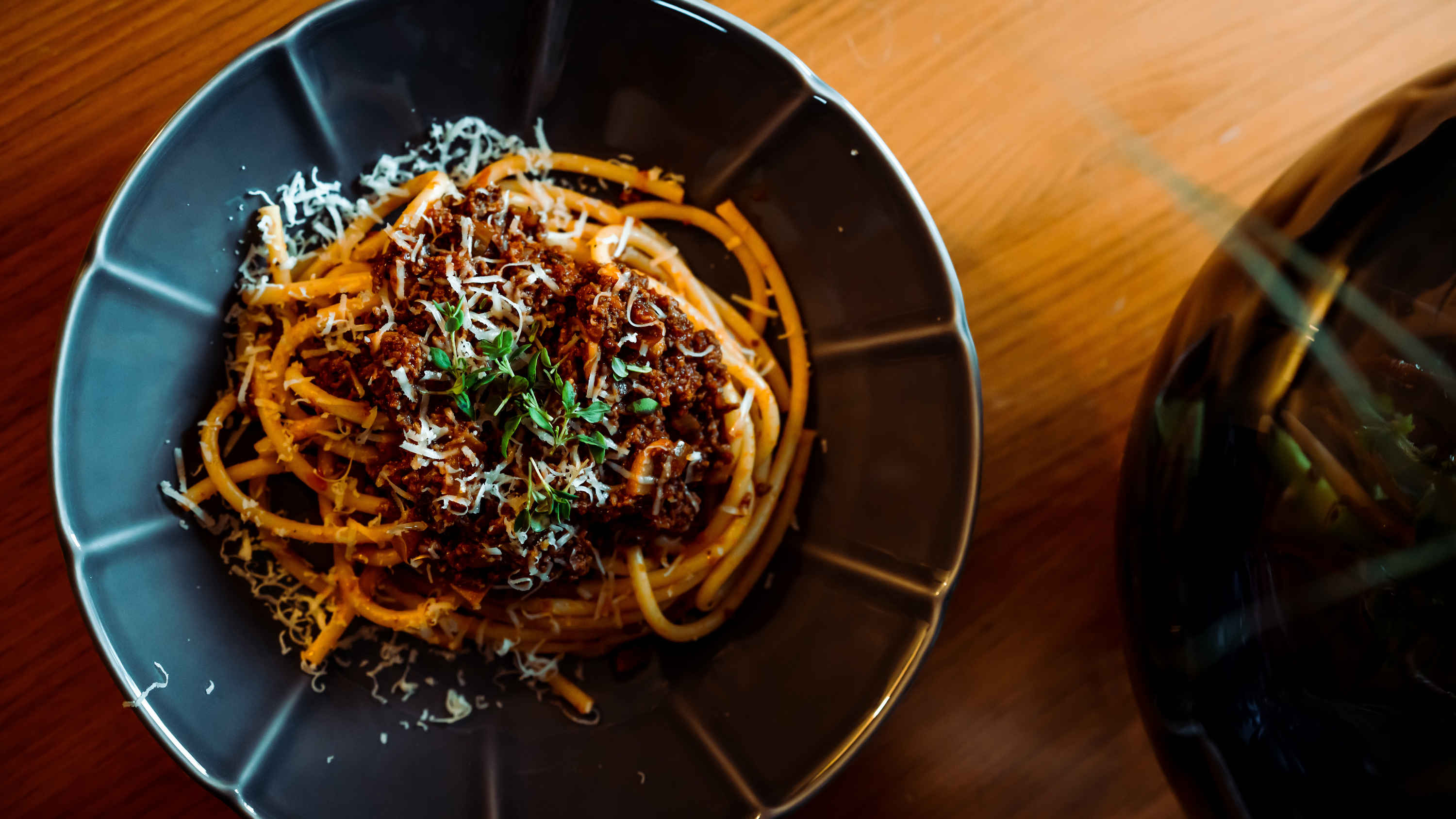 Strolling the city center, you might just brush shoulders with the next Dante or Copernicus - both alumni of the esteemed university here, the oldest in Europe.  Founded in 1088, it continues to be one of the foremost centers of higher education on the continent.  The student population guarantees a plethora of spots to stop for an aperitivo or glass of the inimitable sparkly red Lambrusco famous in the parts.  This unusual beverage does not travel well so is not often exported and so remains somewhat mysterious to the uninitiated but pairs perfectly with the local specialties. 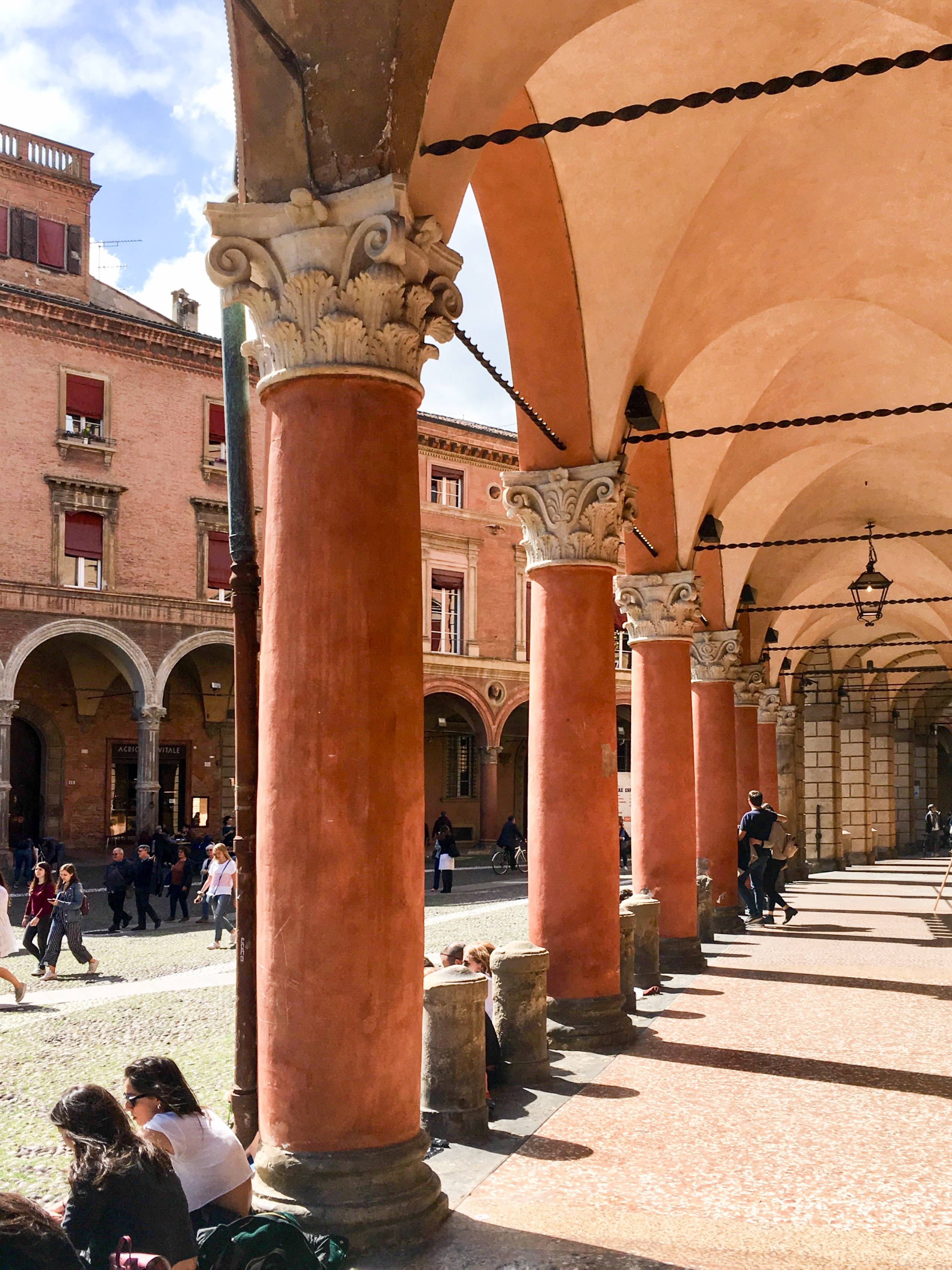 Bologna has the nickname 'la rossa' or 'the red'

Dante not only spent time in Bologna but memorialized his stay with verses celebrating the towers that have dotted the skyline here since the middle ages. Once one hundred in number, only 17 remain today giving Bologna its distinctive architectural style.  The Torre degli Asinelli is actually the tallest leaning tower in Italy but the least well known.  With advance reservations, you can climb the nearly 500 steps for a breathtaking view from the top.

Leaving Bologna and heading towards Venice, we deviate on our Italian road trip from the A1 and head east towards the Adriatic coast, and yes another UNESCO world heritage site (there are 55 total in Italy!) But before we reach the sea, Ferrara awaits us, set inland in the fertile Po river valley. While sparkly Ravenna (revered for its medieval mosaics) is just a few miles further towards the sea, lesser-known Ferrara is worth the detour.  Its history dates back to Roman times but reached its heyday during the Renaissance with the rule of the powerful Este family.  Patrons of the arts with big coffers, the Este reign is noted for achievements in music, art, and city planning. Palazzo Schifanoia, built as a venue for entertainment for the family and their guests, holds remarkably well-preserved frescos by Francesco del Cossa and Cosimo Tura’ dating to the 1400s. The fortified walls and the moat of the Estense Palace are testaments to the power and authority of the family for generations. 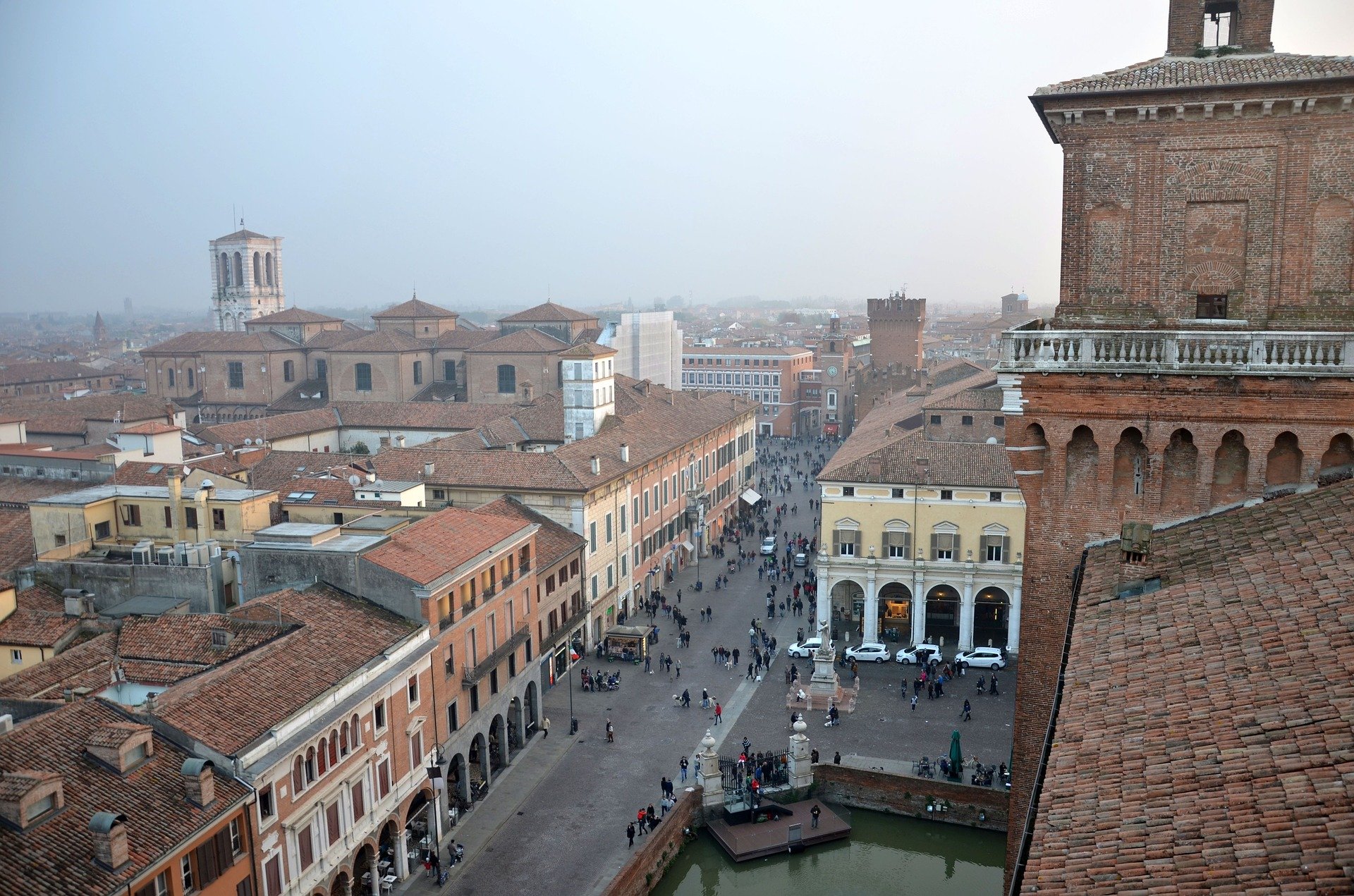 While you are here, live like a local and explore the city by bicycle.  Not only are the city streets easy to peddle along, but you can ride up and around the city walls - almost 9 kilometers worth of manicured trails - and understand the might of the early rulers of this place who needed fortification to keep out their rivals.  After an active day, a plate of the local specialty, cappellacci alla zucca will hit the spot - warm and creamy pumpkin filled pasta ‘hats’ (cappello in Italian) that have been made here since medieval times.

A quick ride from Piazza del Cattedrale in the heart of the city leads us to the newest reason to stop off in Ferrara - the Museum of Italian Judaism and the Shoah, opened in 2017 to preserve and share the story of Jews in Italy, a 2000 year history.  The permanent collection traces the origins of Jews in the Italian peninsula and the influences of Jewish presence over the millennia. A place of learning and reflection, a visit to MEIS allows for quiet contemplation away from the crowds of Rome’s Jewish quarter or Venice’s famed walled Ghetto.

Read/Watch: Garden of the Finzi Contini 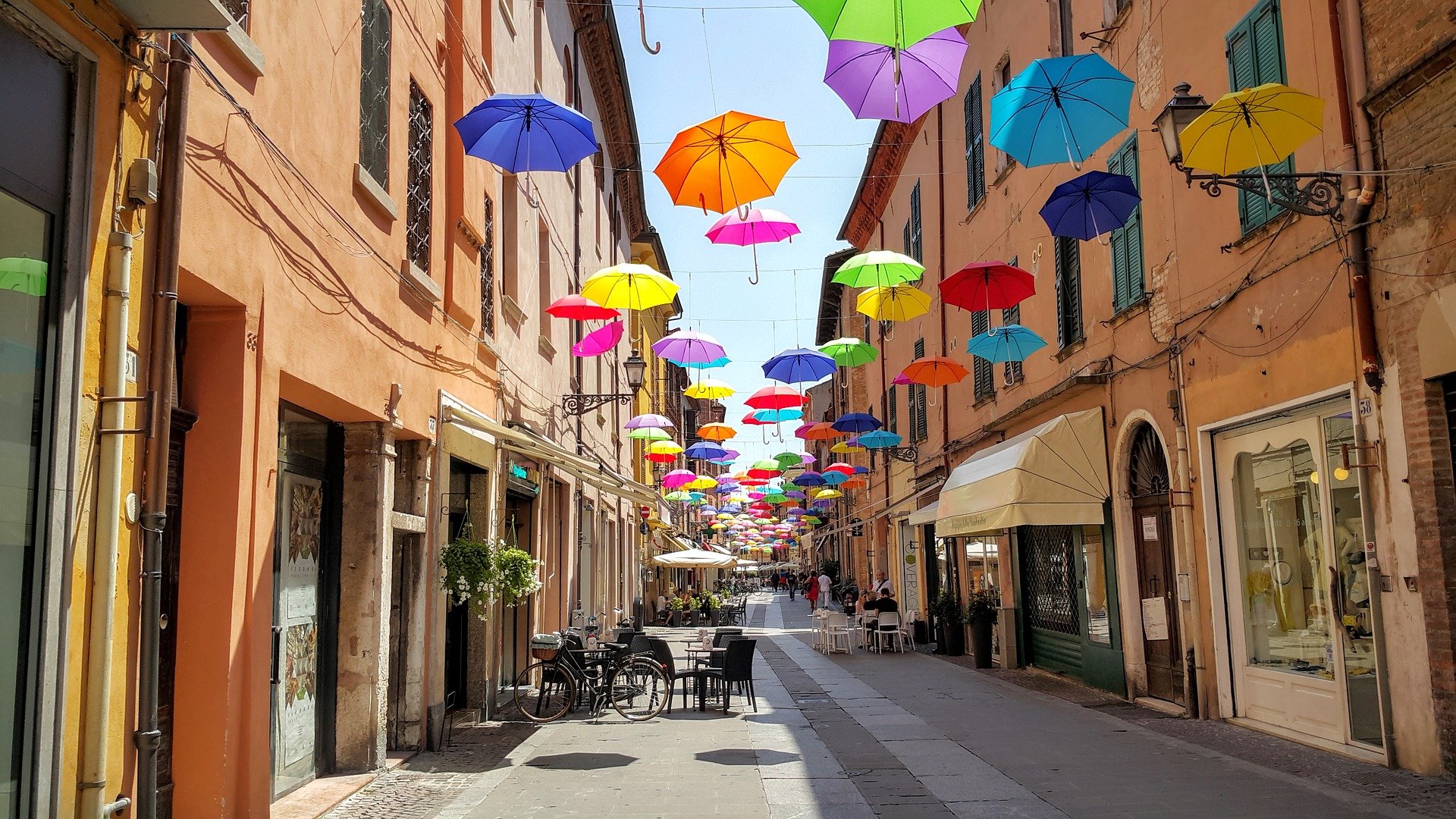 So... Journey Beyond Rome, Venice, and Florence

Italy is full of wonders. There is no rival for the ephemeral beauty of Venice, the sheer density of Renaissance art and architecture of Florence, or the majestic span of history on show in Rome, we agree. But by adding smaller, less touristed cities and towns to your Italy road trip helps to link the ideas and concepts unveiled in those 3 more famous places. Arezzo helps us understand the notion of the Tuscan city-states and how power was consolidated in small fortified cities and then how the Medici created their empire by collecting pieces for their Duchy, and we understand Florence better for it.  Ferrara, first a Roman outpost then the stronghold of the Este family, was later a Papal state. How better to understand the evolution of Rome than by putting ourselves in context, far from the capital? Bologna is a force of its own, but a visit there opens our understanding to the depth of Italian history and culture and its role in a greater Europe as the site of the first and oldest university (if tortellini alone were not worth the trip!). The places in between weave the fabric that is Italy and understanding the minor characters make us love the stars all the more. 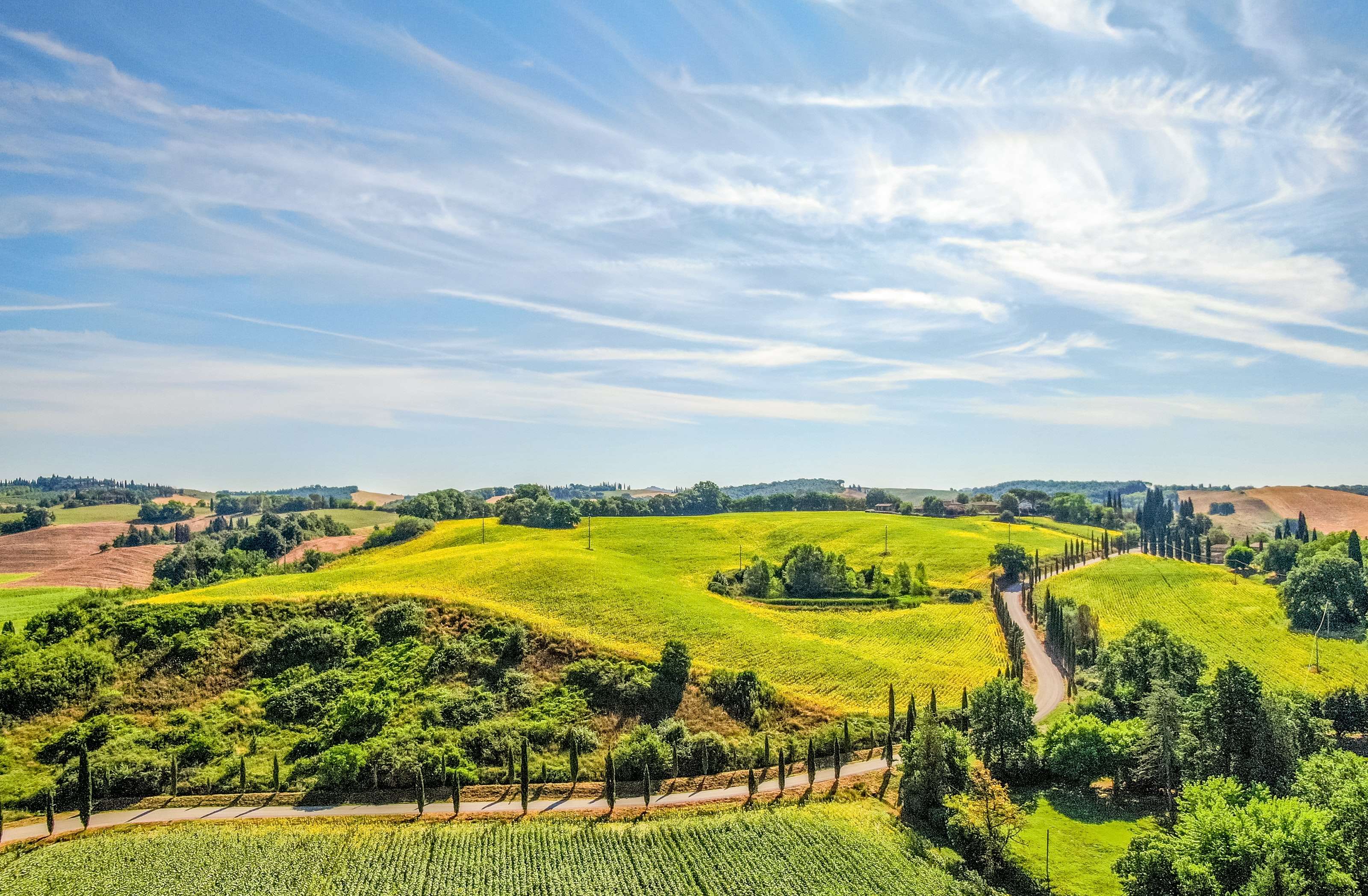 The rolling Tuscan hills await...
Author: Written by Context Italy Program Director, Megan Todd, who can personally vouch for this being one of the best Italy road trips (she and her family voyaged along this route in 2019).
Company
Programs
Resources
Newsletter