A beautiful paradise full of stunning views, Greece is always at the top of a savvy travelers list of must-see destinations. With more than 200 inhabited islands to select from, it can be overwhelming to narrow down the amazing options. We've curated this list of Ten Islands that curious world travelers are sure to enjoy during their next trip to the Mediterranean.

Our experts and local guides have offered us their insider-tips and tricks for making the most of your time on the Top Ten Greek Isles. 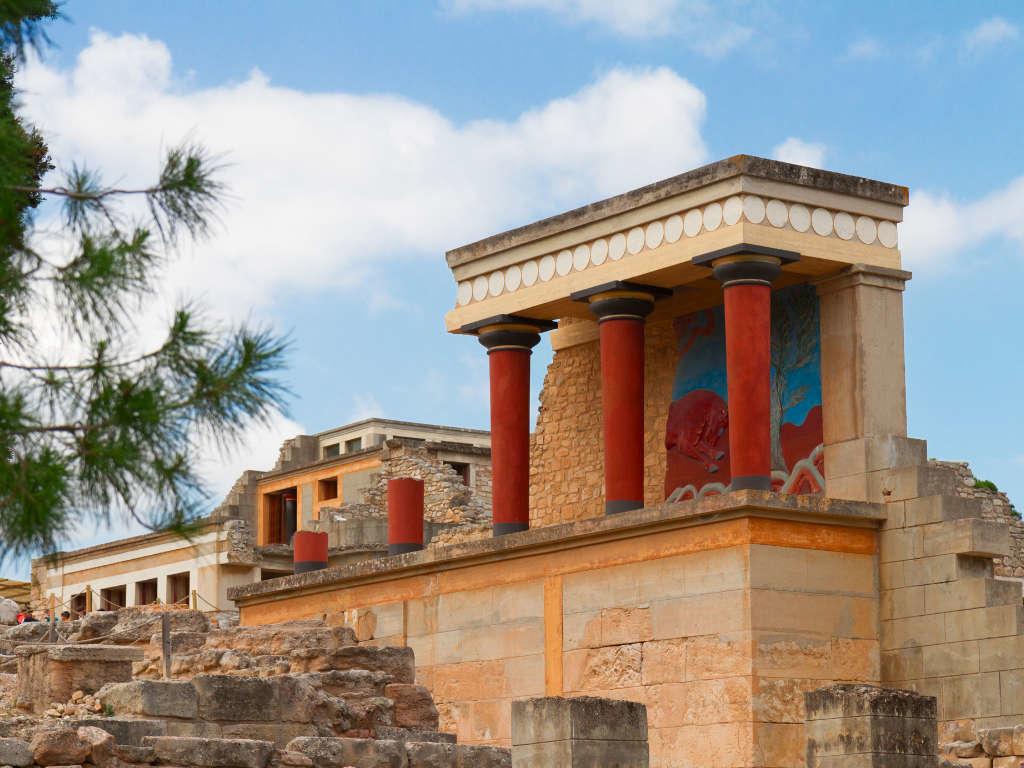 Crete, the largest Greek Island, is a top destination for history buffs. Home to the oldest advanced civilization in the entire European continent, the Minoans, the island is dotted with spectacular Bronze Age palaces and archaeological remnants of this great civilization.

Concentrated in the Central and Eastern portions of the island, Crete boasts four ancient Minoan palaces: Knossos, Phaistos, Malia, and Kato Zakros — all must-see destinations in Crete for ancient history fans. Beyond the famous Minoan sites, Crete boasts several other archaeological wonders including The Venetian Fortezza and Castello del Molo.

Dimitra Pilarinou, a Context Expert and Greek historian, loves to remind travelers that beyond the compelling ancient history, Crete is "the most multifaceted island in Greece, with unique biodiversity and natural beauty." So, not only do travelers get to see spectacular sites, but they get to do it with some of the most stunning scenery in the world.

Dimitra's favorite things to do in Crete:

Learn more about Crete with our interactive online conversations:

And if you're ready to visit Crete in person, join us on a private walking tour: 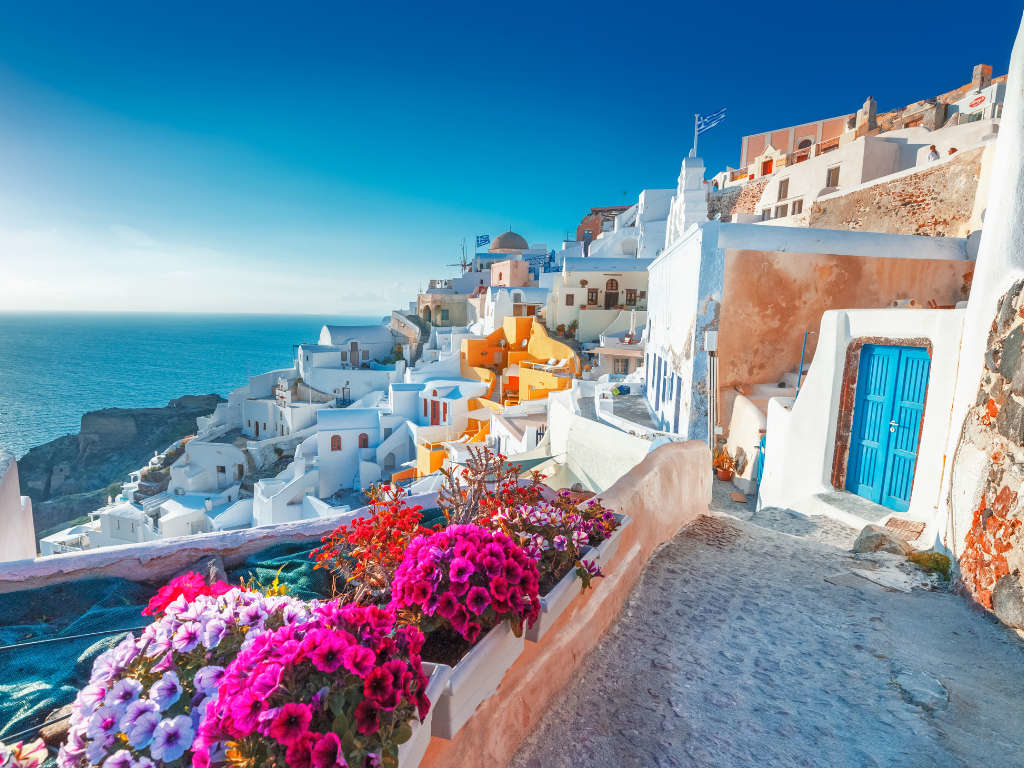 Best For: A Cultural Traveler Who Admires Greek Aesthetic and History

Officially named Thira, Santorini is a remnant of a volcanic caldera from one of the largest volcanic eruptions in the last 100,000 years. This cataclysmic event had the force of 40,000 Hiroshima bombs ending all life and burying Akrotiri under a thirty-meter blanket of pumice and ash, a true Bronze Age Pompeii, and supposedly ended the Minoan civilization in Crete.

History buffs love Santorini because the island is home to the Akrotiri Ruins, Argyros Mansion, Ancient Thera, and the Cathedral of Saint John the Baptist. Known for being the 'supermodel' of the Greek Islands, Santorini’s dramatic black cliffs, white-washed architecture, and striking blue-domed churches create a unique visual identity. Santorini is known for having more churches than houses, and more wine than water (since it hardly rains there).

What to do in Santorini:

Learn more about Santorini with our interactive online conversations: 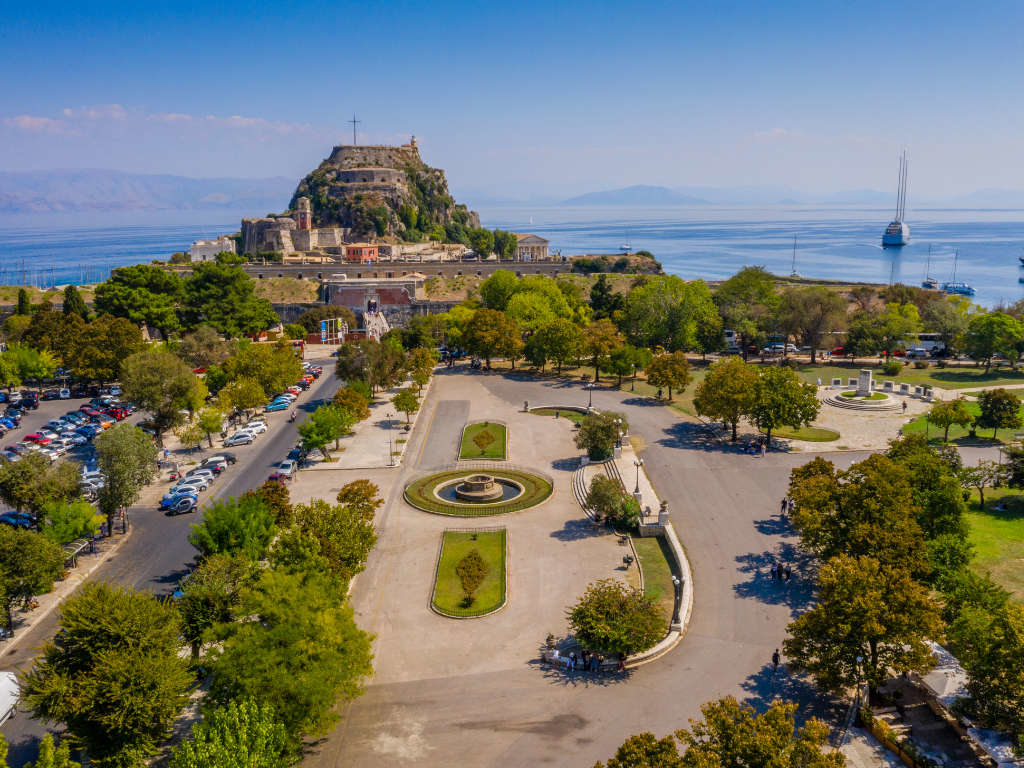 Best For: A Traveler Who Admires Foreign Influences on Grecian History and Modern Life

Also known as Kerkyra, this island has a strong British and Venetian influence, since Corfu only became part of Greece in 1864. With castles surrounding Corfu town, its strategic location was always desirable and constantly fought over for centuries.

Corfu is home to the 1st university founded in Greece, and also home to the first modern theatre and opera of Greece! While visiting Corfu, Dimitra loves to stroll around in the Spianada Square (1 of the biggest in the Balkans), visit the Palace of the Empress Elisabeth of Austria, and the Achilleion. She also tells us about the Greek Orthodox Easter celebrations in Corfu, where "locals throw pots out of their windows and balconies smashing them into the streets in order to celebrate Christ’s resurrection".

What to know before you go to Corfu: 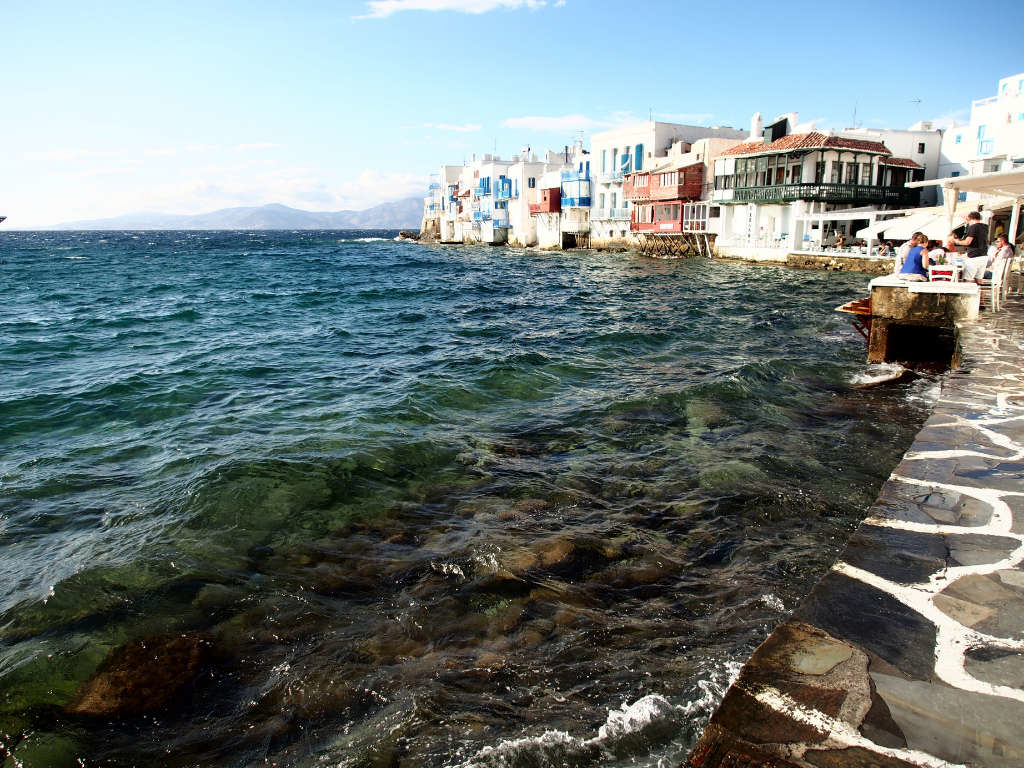 Best For: The Curious Traveler Who Seeks Deeper Historical Context of Popular Sites

The small Cycladic island of Mykonos is home to 10,000 people yet it's the most cosmopolitan island in Greece because the town receives more than 2,000,000 visitors per year.

Established in the 11th century B.C. by the Ionians, Mykonos is perfect for history lovers, with lots to discover, like the Church of Paraportiani, Little Venice, the Monastery of Panagia Tourliani, and hear tales of vampires and old-time pirates. Because of its location in the Aegean Sea, the island was often raided by pirates throughout history. Our favorite Mykonos fun fact is that the island has 600+ Byzantine Churches - an estimated 1 church per local family.

Don't miss out on these must-try experiences in Mykonos, according to Dimitra:

Learn more before you go with an interactive online conversation, led by a Context expert:

Marvelous Mykonos: History and Beauty in the Aegean Sea with Smaro Touloupa 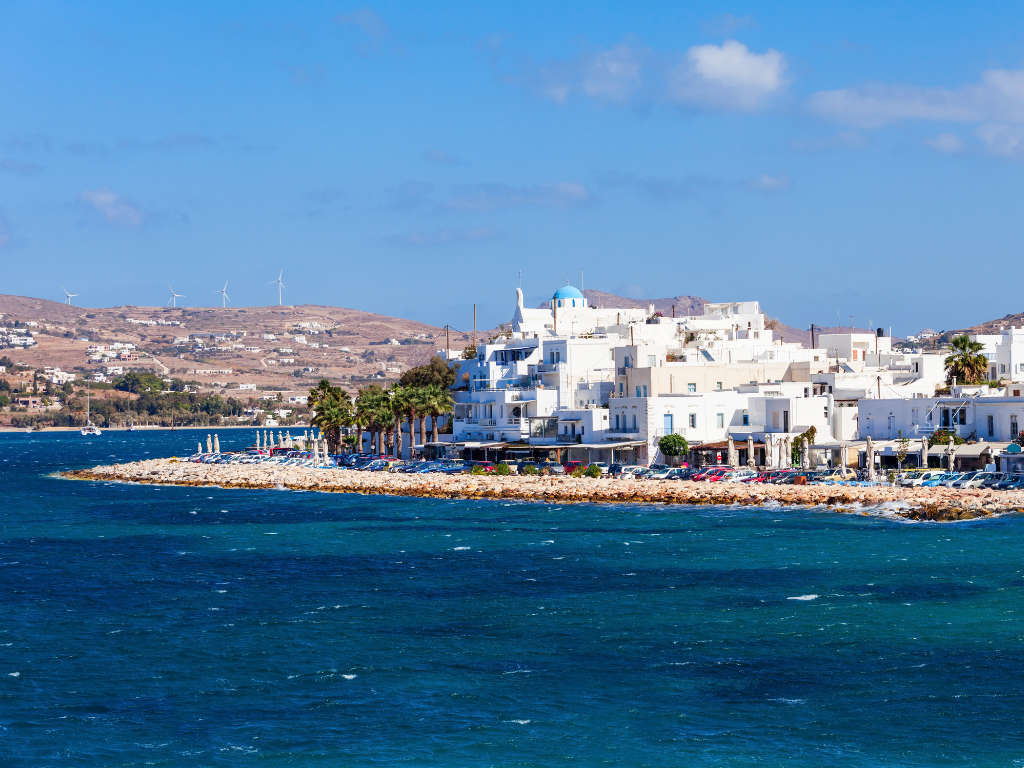 Best For: Travelers seeking the Best of the Best Greek Islands

A short ferry ride away from Mykonos, Paros is located in the heart of the Cyclades. Voted the best island in Europe for 2020 by Travel + Leisure Magazine, it has something for everyone: natural beauty, ancient history, unspoiled beaches, Greek traditions, local festivals, and authentic village life.

During the middle ages, Lefkes was the capital of Paros, and home to the Chuch of Agia Triada - the town's main church made out of Paros' famous fine, white marble. Historically, Paros is not only connected with the famous gleaming white marble of classical art, but with Byzantium as well. Two Byzantine emperors, Constantine the Great and Justinian, built the unrivaled Ekatontapyliani Church, a unique monument. The cultural routes of the Aegean intersect here with the routes of the pirates, the Crusaders, and the Venetians.

What to do in Paros: 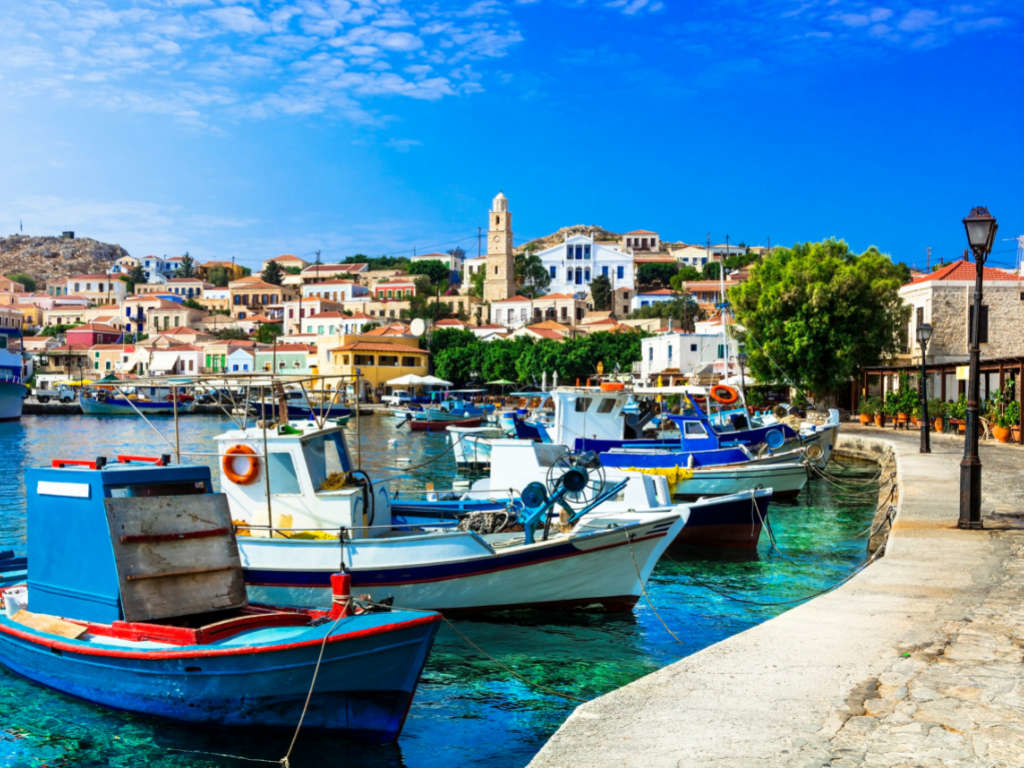 Best For: The Busy Traveller Who Wants a Little Bit of Everything While Island Hopping

Located in the heart of the Cyclades, Naxos is the largest and greenest island in the island group. According to Greek Mythology, Zeus was born and raised in Mount Zas, also the highest point of the Cyclades. Naxos is famous for its fertile land and abundance of agriculture, making the island historically self-sufficient and financially independent.

History lovers can take a hike on one of Naxos' several hiking trails, which lead to several of the 200+ Byzantine (and 500+ pre-and post-Byzantium) churches, with 120 of them maintaining their original frescoes dating back to the 6th and 7th centuries. Agii

What to do when visiting Naxos: 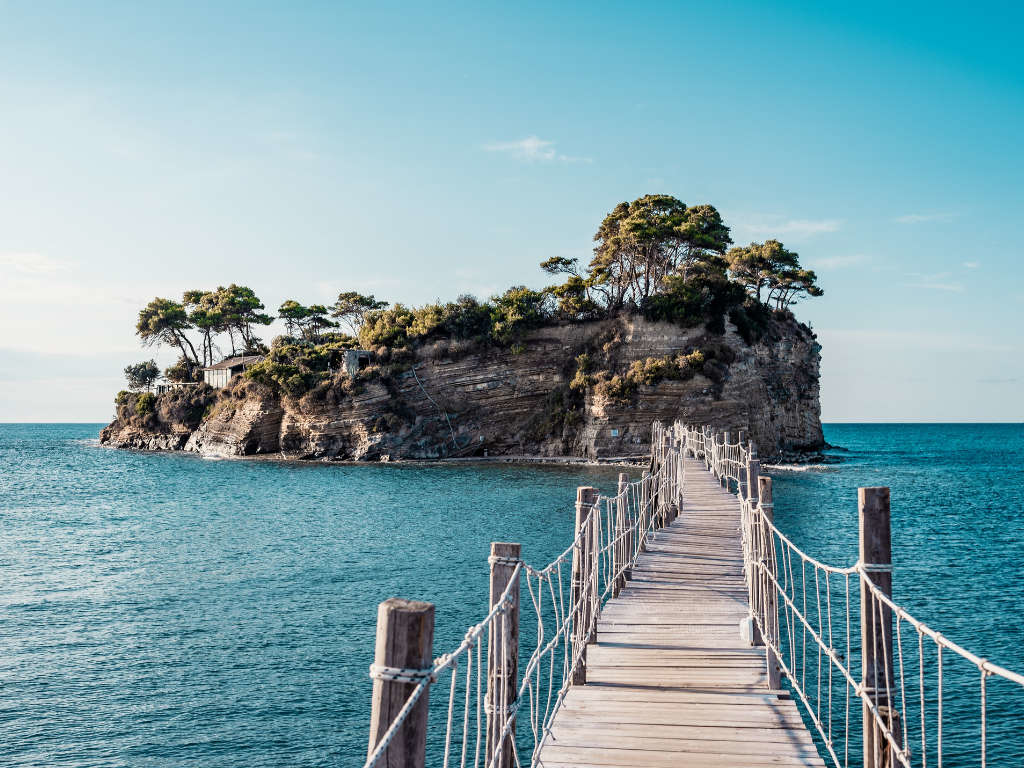 Nicknamed the "Flower of the Levant", Zakynthos is the third largest Ionian island and home to the famous Navagio beach - also known as shipwreck beach - where you'll find a shipwreck from 1980 in an exposed cove. During World War II and the German occupation of Greece, a famous Mayor and Bishop refused orders to turn in a list of names of the town's Jewish residents for deportation to the death camps. Instead, they hid most of the town's Jewish people in rural villages, and according to some sources, all 275 Jews of Zakynthos survived the war.

Besides being home to the endangered species of the Caretta Caretta loggerhead turtle, Context Expert, Dimitra Pilarinou shares that in Zakynthos, we can find the deepest point of the Mediterranean sea, some 4004 m SE of the island, and that the island is tied with Rhodes for having the longest annual sun exposure in Greece.

What to do in Zakynthos: 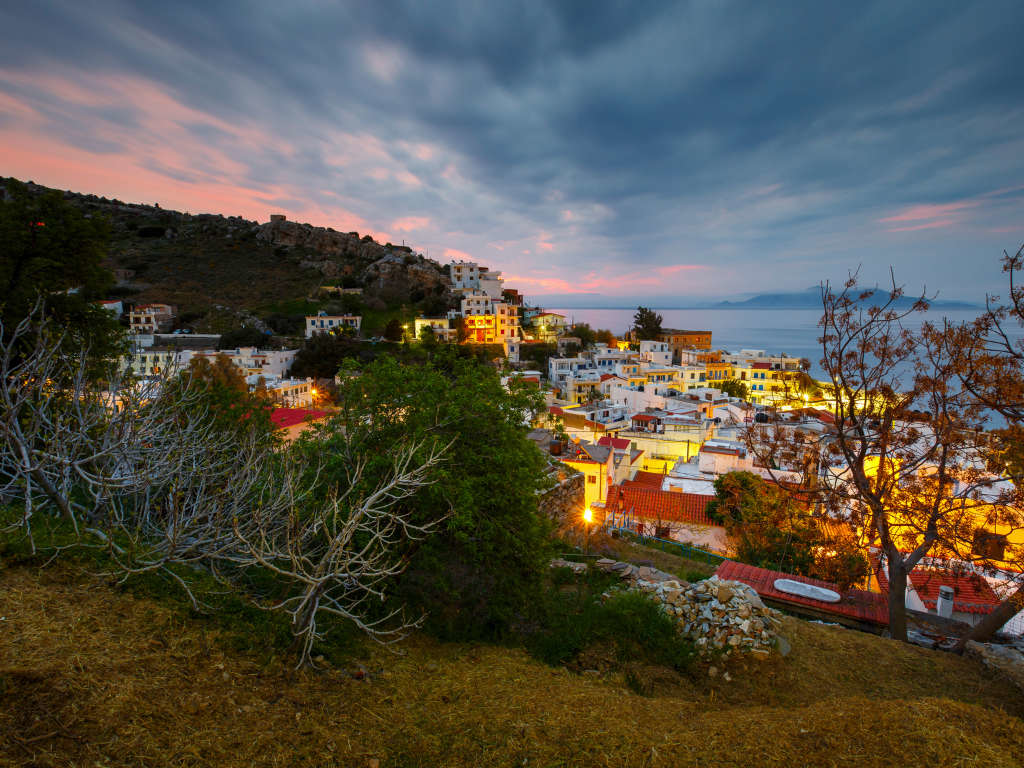 One of the oldest islands in the Aegean Sea, Ikaria is well known for its mountainous terrain and strong red wine. Apart from being associated with the legend of Icarus, Ikaria has been inhabited since at least 7000 BC, when it was populated by the Neolithic pre-Hellenic people of the Pelasgians. Due to successive wars in the mid-1900s, Ikaria suffered a great loss in human life and property. Ikaria first suffered in 1941 during World War II when the Germans invaded Greece, then the island suffered again during the Greek Civil War in 1946.

When visiting Ikaria, don't miss visiting the Archeological Museum of Kampos, then going next door to the Church of Agia Irini, Ikaria's oldest church, then finishing the day at the Castle of Koskina.

What we love about Ikaria: 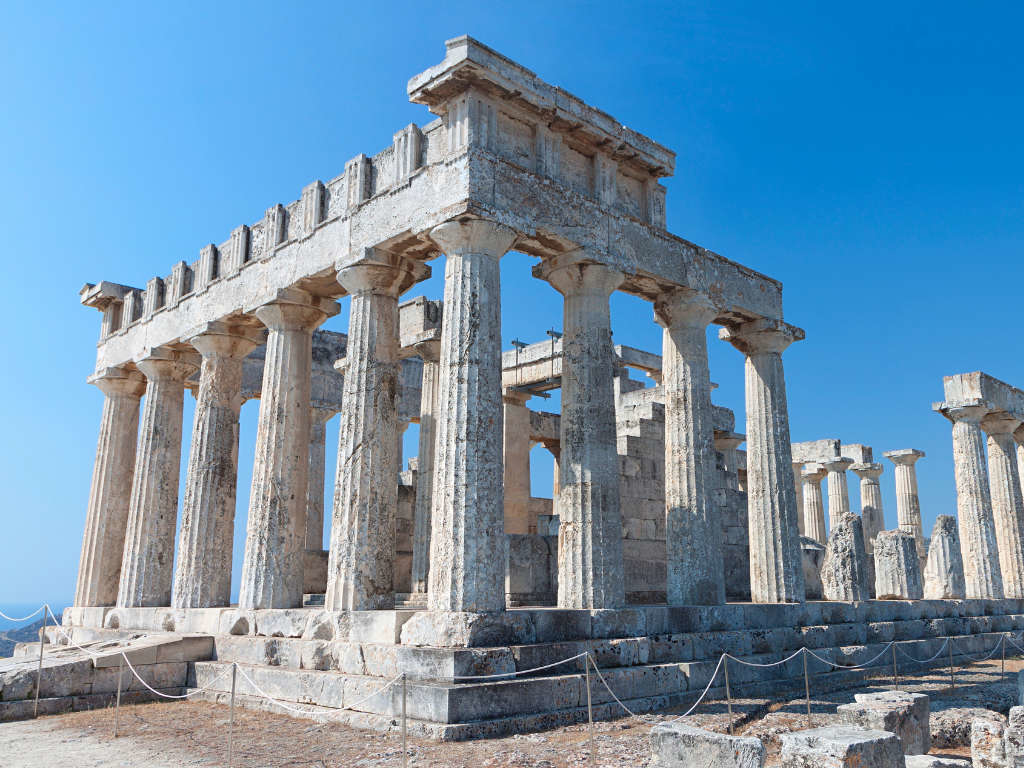 Best For A Quick Day Trip from Athens

Located in the Saronic Gulf and an hour away from Athens, Aegina makes the perfect day trip for tourists and Athenians.

In 1200 BCE, Aegina flourished and was in competition with Athens; the standard of weights and measures developed by Aegina became the standard all over Greece, Aegina was the first to mint coins, and their fleet of ships carried on trade throughout the Mediterranean and the Aegean.

What we love about Aegina: 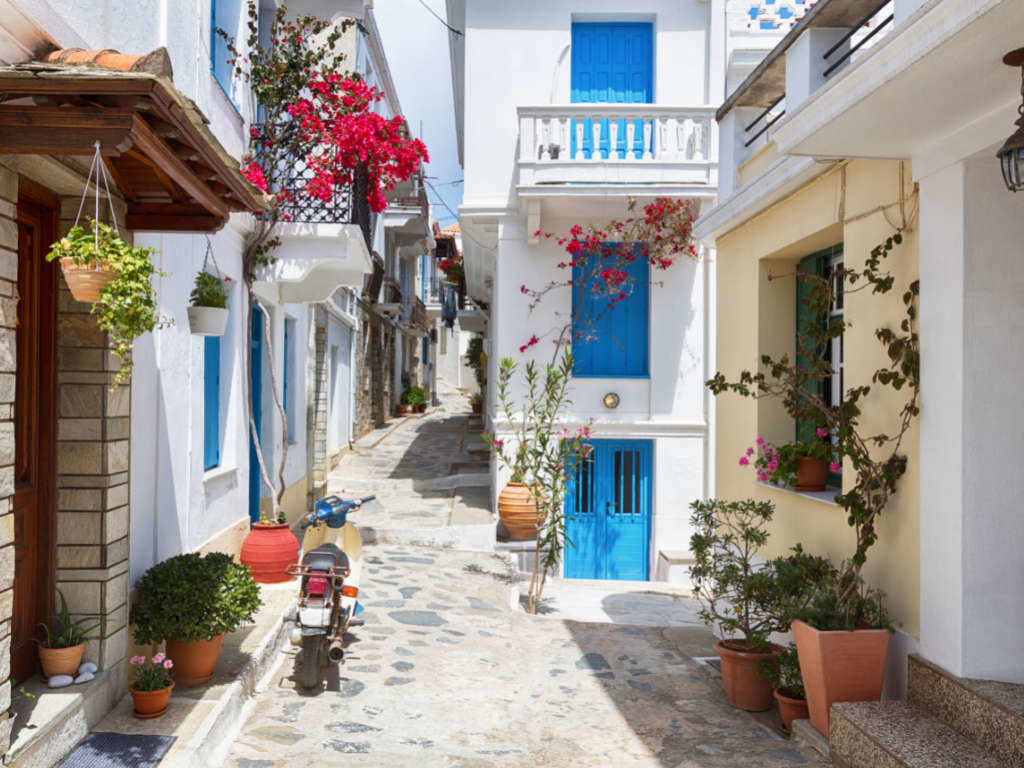 Best For the Musically- Inclined Traveler who Loves Mamma Mia and Fine Wine!

Being the greenest island in Greece, with over 50% of its area covered by a forest of pine trees, Skopelos is best known for being the picture-perfect island featured in Mamma Mia, where some scenes were filmed at the Church of Agios Ioannis (now also known as Mamma Mia Church).

The same way Aegina is known for their pistachios, Skopelos is well known for their olives and olive oil-based diet, but that's not all! Around 1600 BC, Minoans from Crete settled the island, and their mythical king Staphylos, son of the god of wine Dionysus, introduced the wine to the locals and made the island well known for wine throughout the Mediterranean.

What to do in Skopelos:

Whether you're interested in exploring the Greek Islands on foot or learning about Greece from the comfort of your own home, Context has got you covered!

A special thank you to our expert guide Dimitra Pilarinou!

Context seminars and courses you may be interested in:

Read more about Greece in our other blog posts:

Written by Aanchal Kumar. Aanchal is a Marketing Associate at Context. Born and raised in New York, she graduated from Baruch and jumped into the travel industry after learning about different cities and cultures online, then experiencing them in person. When she's not working, she's writing about all her favorite culinary experiences (local and international) on Yelp + TripAdvisor.

Travel
Things to Do in Tokyo