The Best Food in Sicily: 10 Things You'll Want to Eat

There’s no shortage of taste temptations in Italy—bad for our waistlines, excellent for our spirits—but even in a land of culinary marvels, Sicily stands out. The island has a remarkably unique and versatile cuisine that incorporates and indulges in all the culinary influences that have crossed its shores over the last 2000 years. As such, eating in Sicily is as much a flavor exploration as a historical one: a dash from the Ancient Greek, a sprinkle of Byzantine, a generous splash of Arabian, followed by one of the Spanish, and just a soupçon of the Norman. And all that’s just the garnish on top of Italy’s renowned gastronomic legacy, which makes the food culture in Sicily one of the country’s most appealing.

While it’s hard to go wrong when eating in Sicily, there are a few Sicilian bites that we’d recommend searching out—it’d be a real peccato to leave Sicily’s top foods uneaten. (One word of guidance: because most Sicilians cook at home using the island’s excellent ingredients, we’ve found that many restaurants in Sicily exist expressly to cater to—often Italian—tourists. For an insider view on where to eat, join one of our Palermo Street Food Tours and, as in any major city, try to avoid restaurants that are at primary tourist sites, hawk multi-language menus outside their doors, and actively try to lure passer-by inside.)

Ecco our guide of Sicily’s best foods to try, starting off (naturally) with antipasti and small dishes: 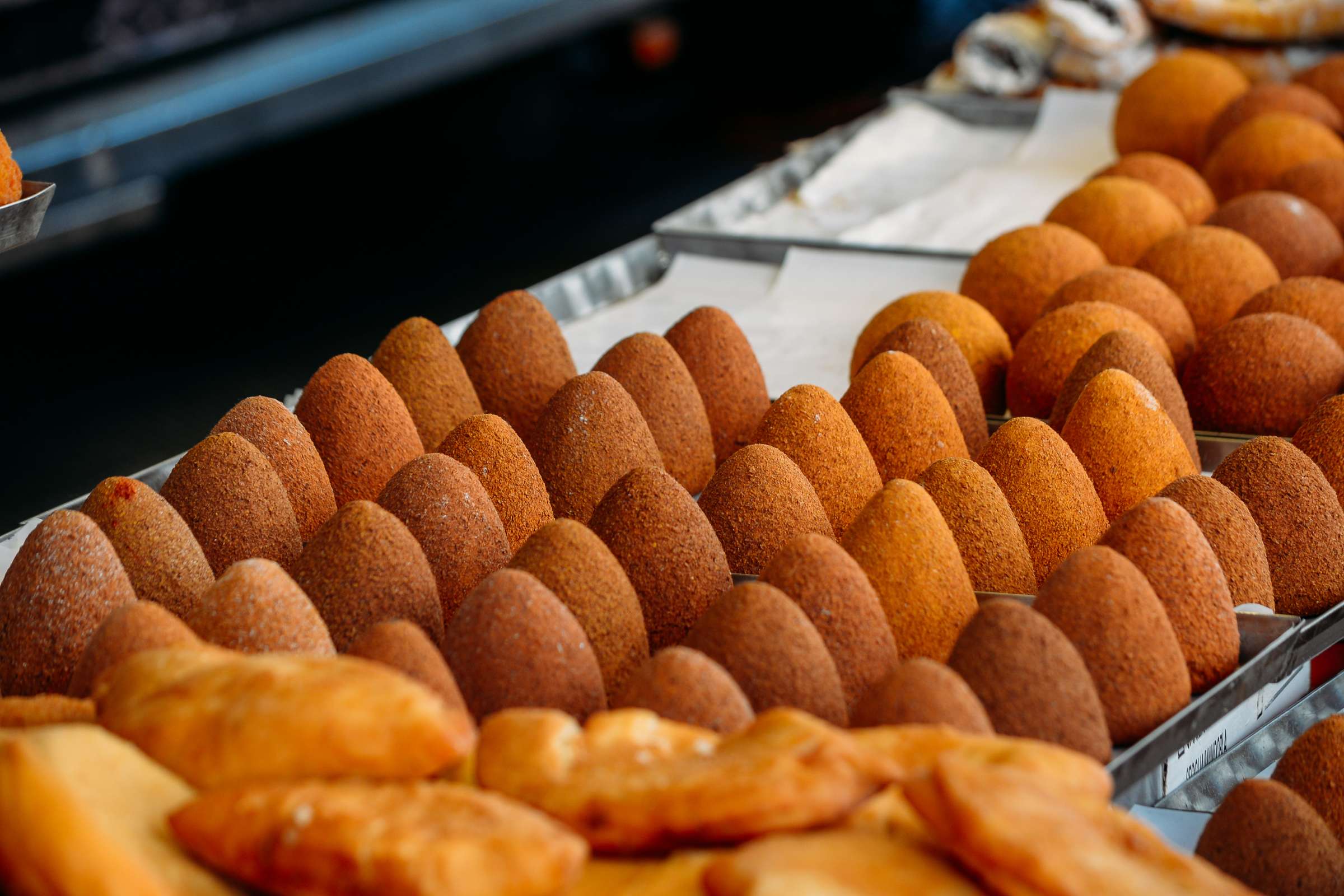 Originating in the 10th century under Arabian influence, this popular snack consists of balls of rice stuffed with delectable fillings (think: ragu or spinach and mozzarella), then covered in breadcrumbs and deep fried. (Look for ‘arancini al burro’, arancini with butter or béchamel sauce, our personal form of kryptonite). Arancini translates as ‘Little Orange’, named for the bright color that results from the saffron spices in the rice mixture.

On the east coast, arancini often come in a cone-shape, with a flat base reminiscent of Mount Etna. This is entirely unsubstantiated, but we’d bet that some Sicilian had a bad experience with these delicious rice balls rolling away and promptly modified their shape to stop the starchy fugitives from skittering out of reach. 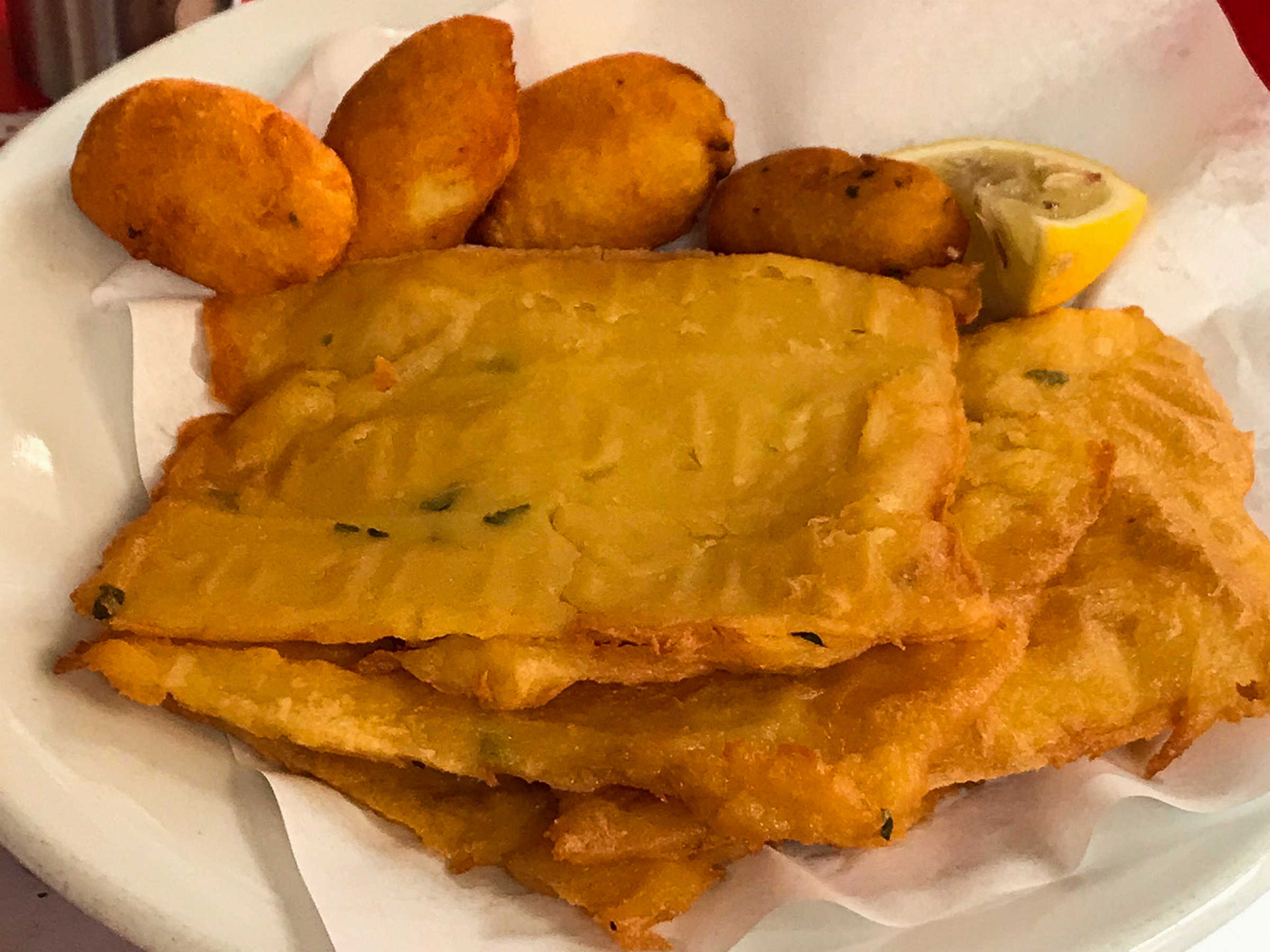 For those interested in street food, these chickpea fritters are a staple in Palermo and other cities. They’re thought to be Middle Eastern in origin, from the Arab occupation of Sicily … though we’re typically not too bothered by their origin when we’re scarfing them down in a roll or on a sandwich, with a hefty shake of salt and pepper.

Indisputably one of Sicily’s top foods, caponata is also one of the island’s most traditional: it seems that every family has its own “secret” recipe. Simply prepared, this dish usually consists of deep fried eggplant cubes in a sweet and sour sauce: the sweetness comes from cooking onions for a long time in shallow water (and often a bit of sugar for good measure). For our money, there’s truly nothing as satisfying as a freshly-made caponata, paired with a side of bread or a slab of fresh white fish. 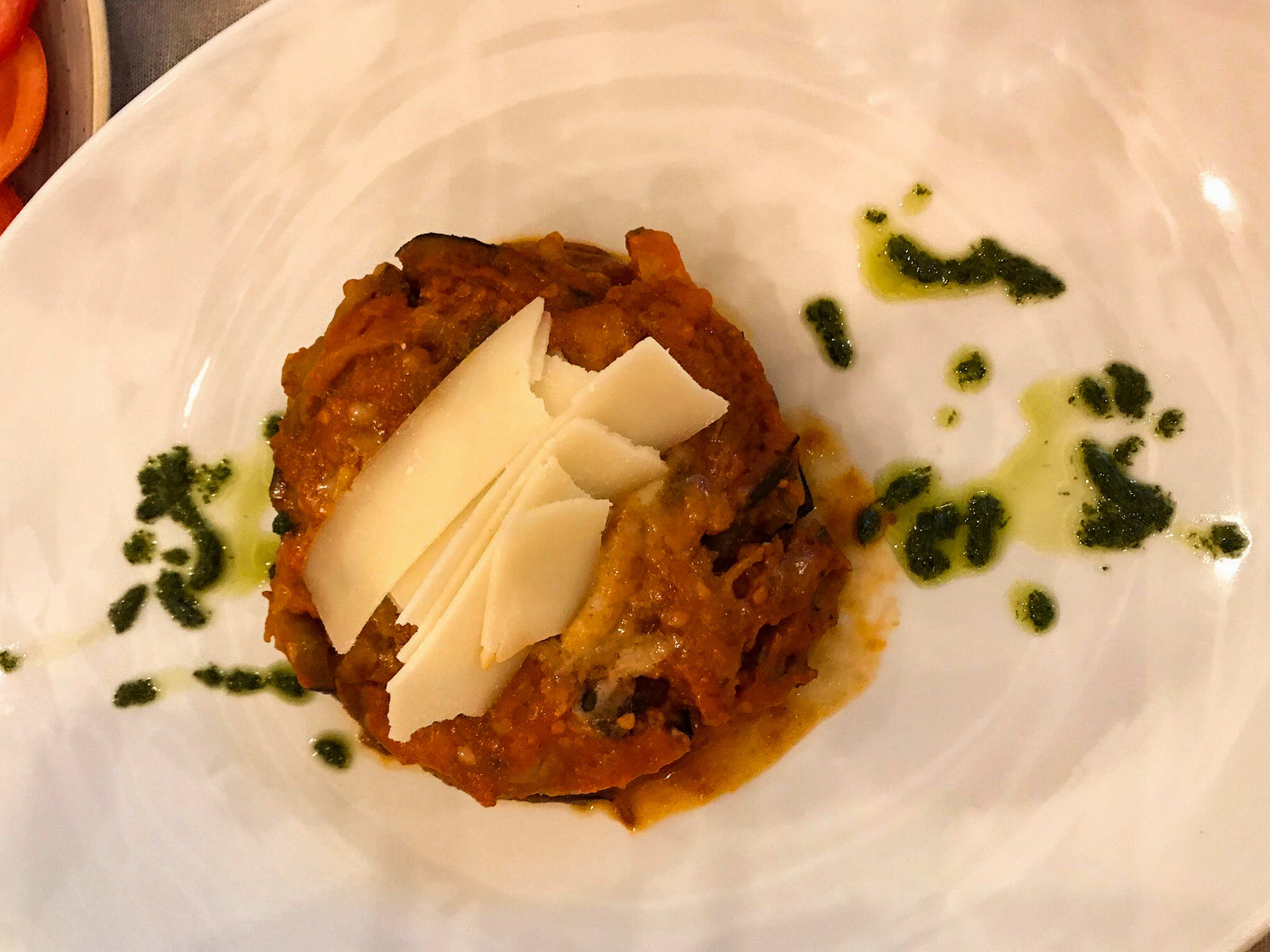 When we’re ready to move on from appetizers to primi and secondi piatti, here’s a handful of the best Sicilian foods in the heartier sections of the menu:

This is one of Sicily’s most well known pasta dishes, hailing from the east coast around Catania. It consists of a simple sauce of tomato, eggplant, and basil, and is served topped with fried eggplant, crumbled ricotta, and fresh basil over tubular pasta like macaroni or rigatoni. We like the etymology of the dish almost as much as its flavor: its name is rumored to originate from an exclamation Italian writer Nino Martoglio made upon first tasting the pasta, likening it to the operatic masterpiece Norma by Vincenzo Bellini. (As an aside: we’re now enthusiastically applying this exclamation to all other things that delight us—that Raphael tour in Rome?!? Alla Norma!) 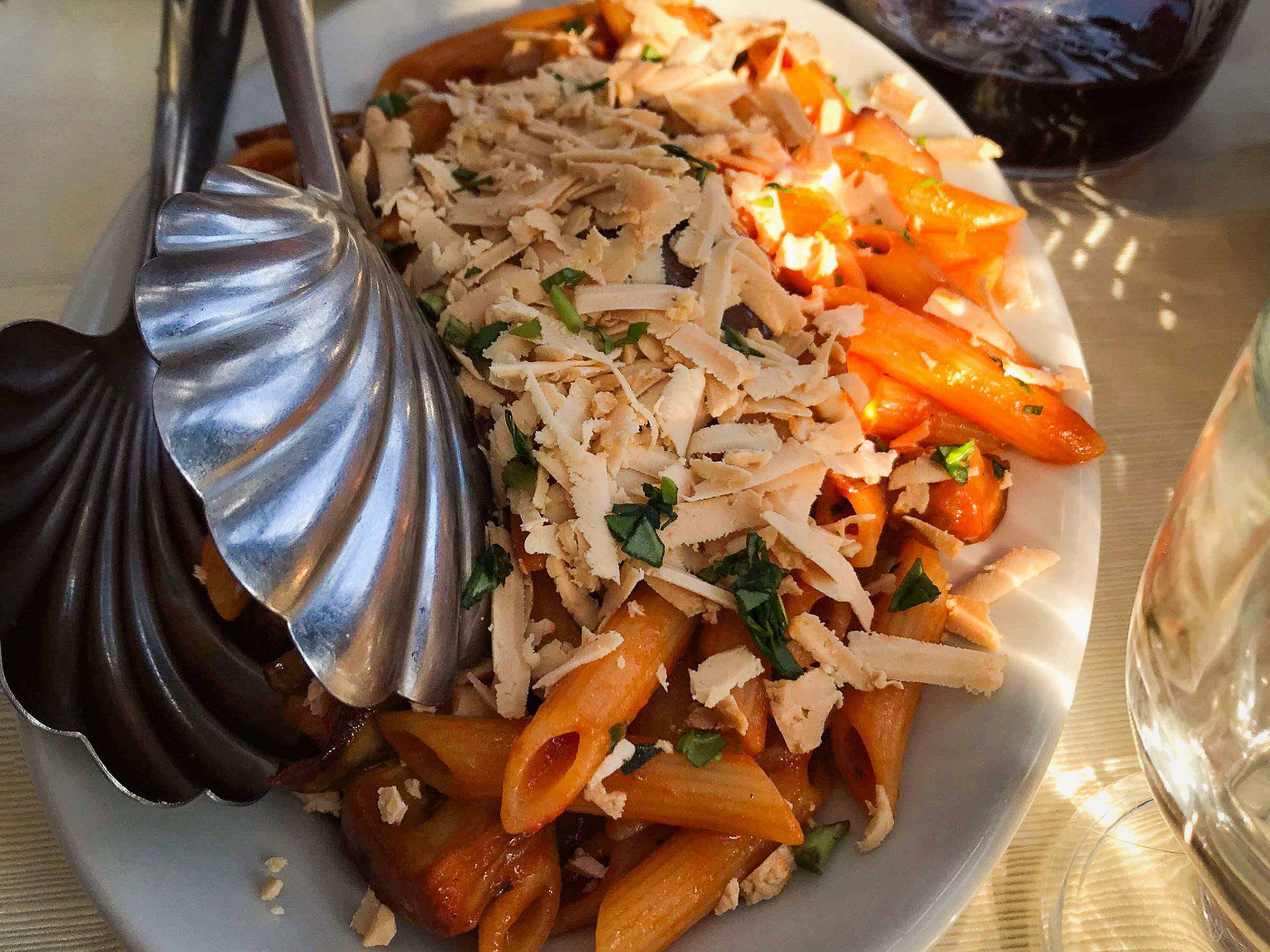 Sicily’s take on the famous Ligurian Pesto, and—though this is a highly contentious statement—the best version of pesto around, in our opinion. First made in Trapani on the west coast, this pesto is made from basil, tomato, pecorino cheese, and chopped almonds grown on the island rather than the pine nuts used in Ligurian recipes. 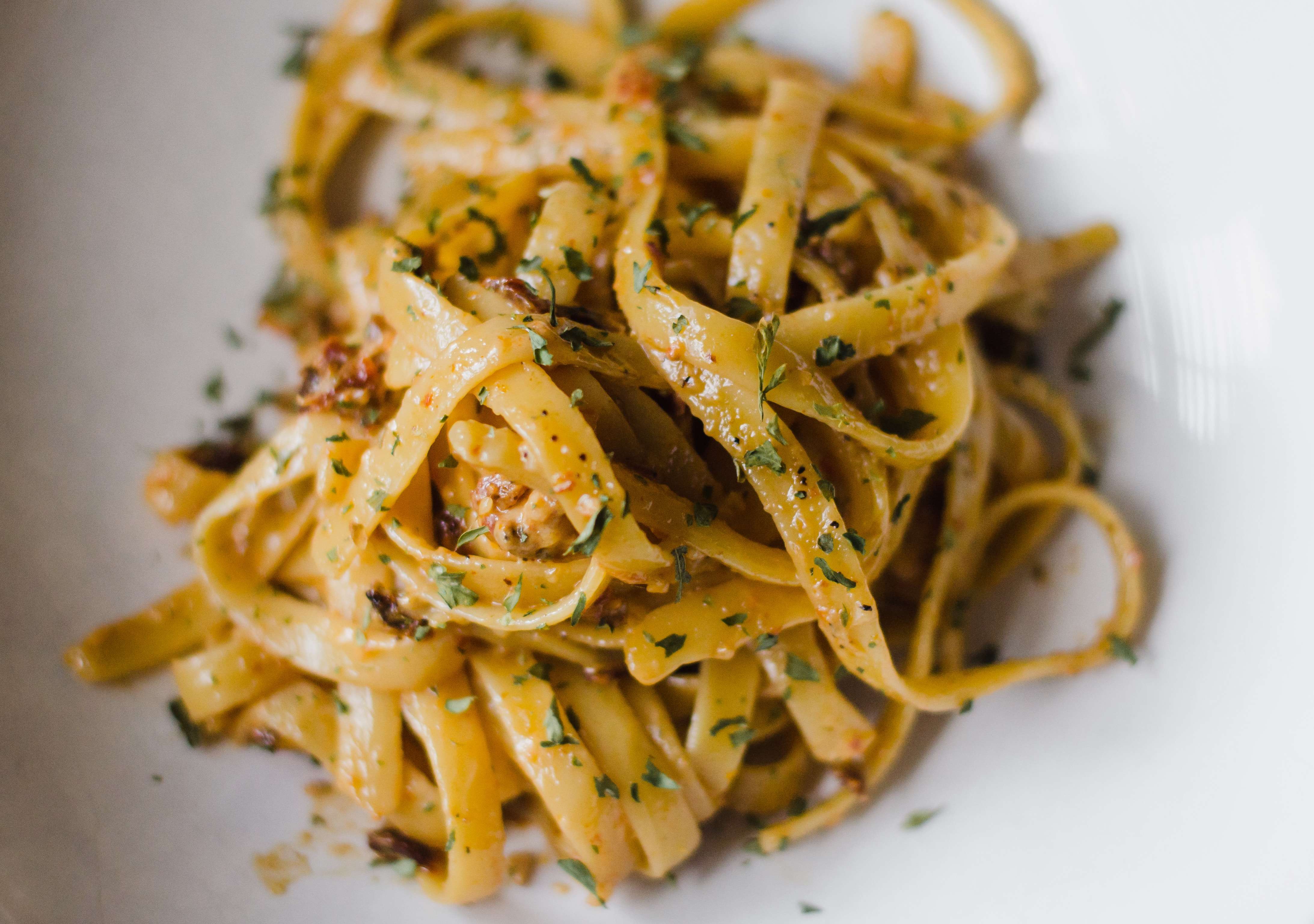 Unlike its thinner-crusted Roman and Neapolitan cousins, sfincione is a pizza that revels in its heft. Its thick-crust is made with a slightly sweetened dough, then topped or stuffed with anchovies and goat’s cheese. This type of pizza originated in Sicily and has evolved through the years in line with what ingredients have been available locally: contrary to our common misconception that pizza and tomatoes have always been inseparable, sfincione wasn’t prepared with tomato until the fruits (or vegetables—but that’s a discussion for another day) became available in the 17th century.

In one of our favorite analogies, the sleeping volcano is often likened to a volatile parent: at the same time that it threatens destruction of nearby infrastructure, it also provides rich minerals to its surrounding soil, a boon to local agriculture, including (and especially) for winemakers. The Etna region produces exceptional and distinctive wines, and the last 10-15 years in particular have seen a rise in both the quality and reputation of Etna wines. 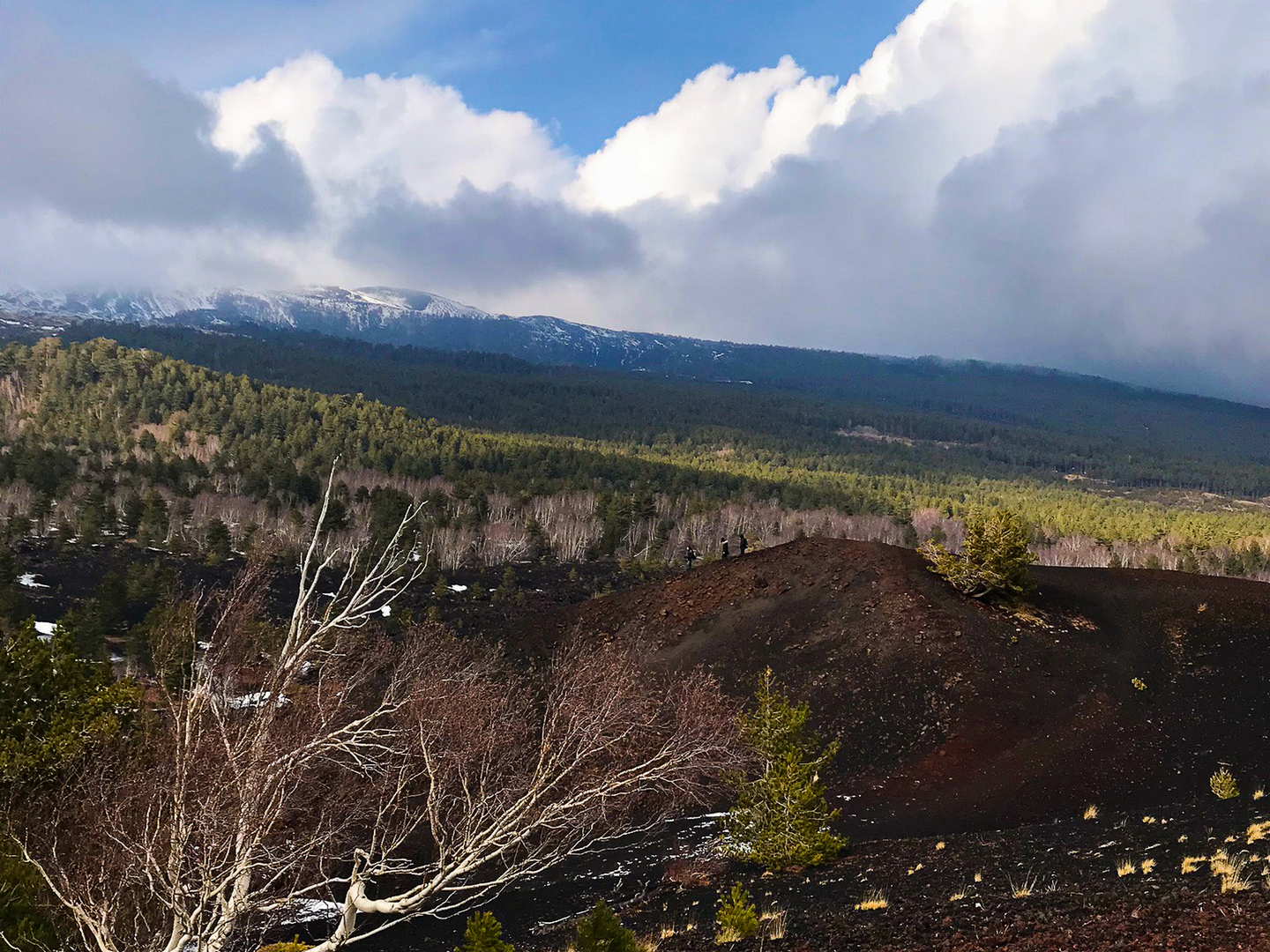 Do not, we repeat, do not, leave Sicily without a bite of this cheese. Pecorino is a traditional Sicilian hard cheese produced using ancient techniques: it’s made using whole sheep’s milk, specifically from sheep that graze in the mineral-rich foothills of Etna, then coagulated with lamb rennet and matured for 4 months. The cheese is used for many kinds of dishes—mainly accompanying pasta—though we think it’s also excellent on its own, or as a sharp addition to a cheese plate. 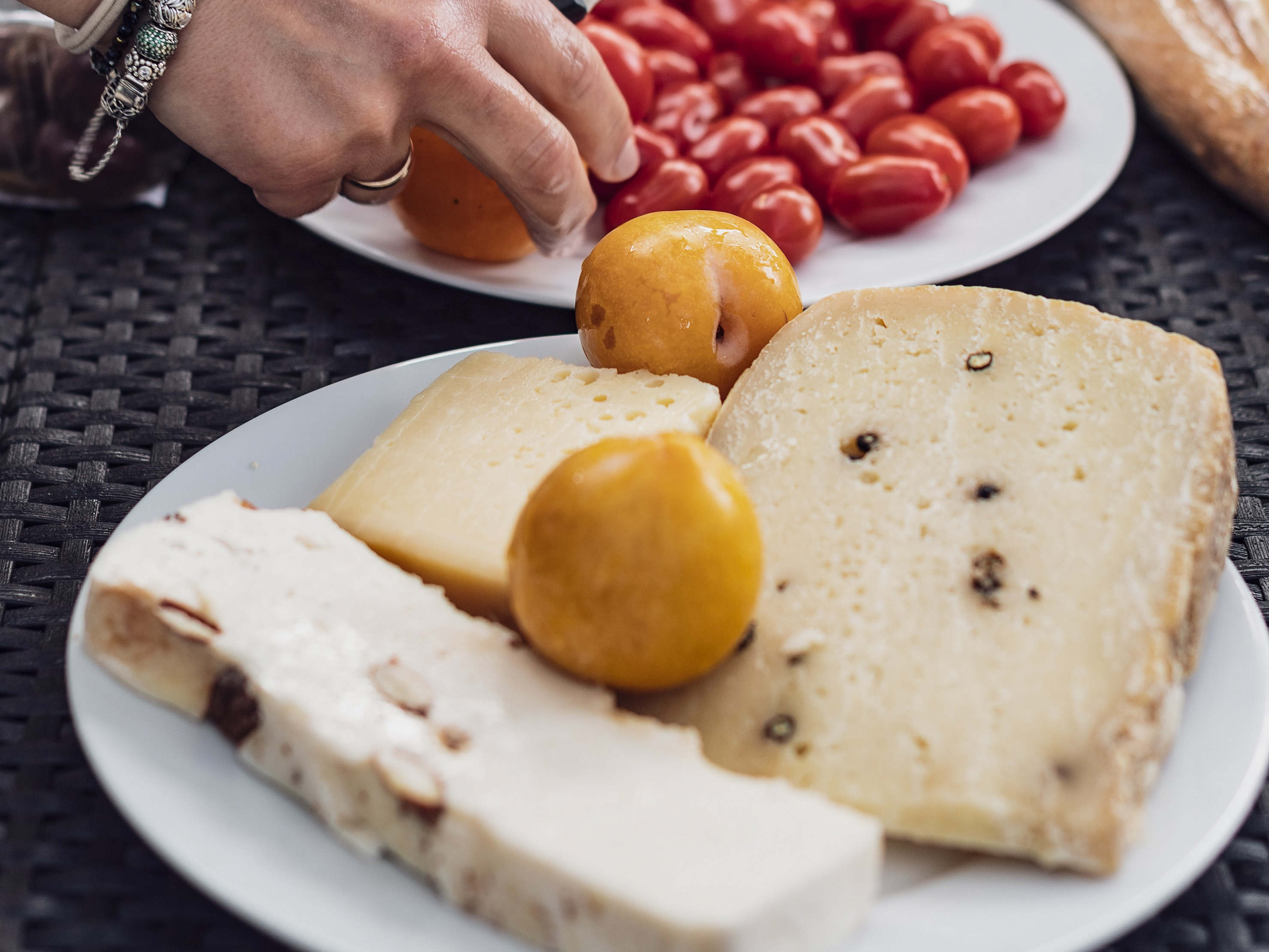 Not only does Sicily boast some of Italy’s best foods, it’s also home to a couple of the country’s most delectable dolci:

While you can find granita around Italy, we’re convinced (after much taste-testing) that this semi-frozen dessert tastes best in Sicily. It’s an alarmingly simple recipe: made of sugar, water, and natural flavorings (our favorites are traditional flavors like lemon, coffee, and mint). As they say: when in Sicily, do as the Sicilians and try it with a brioche for breakfast in summer. 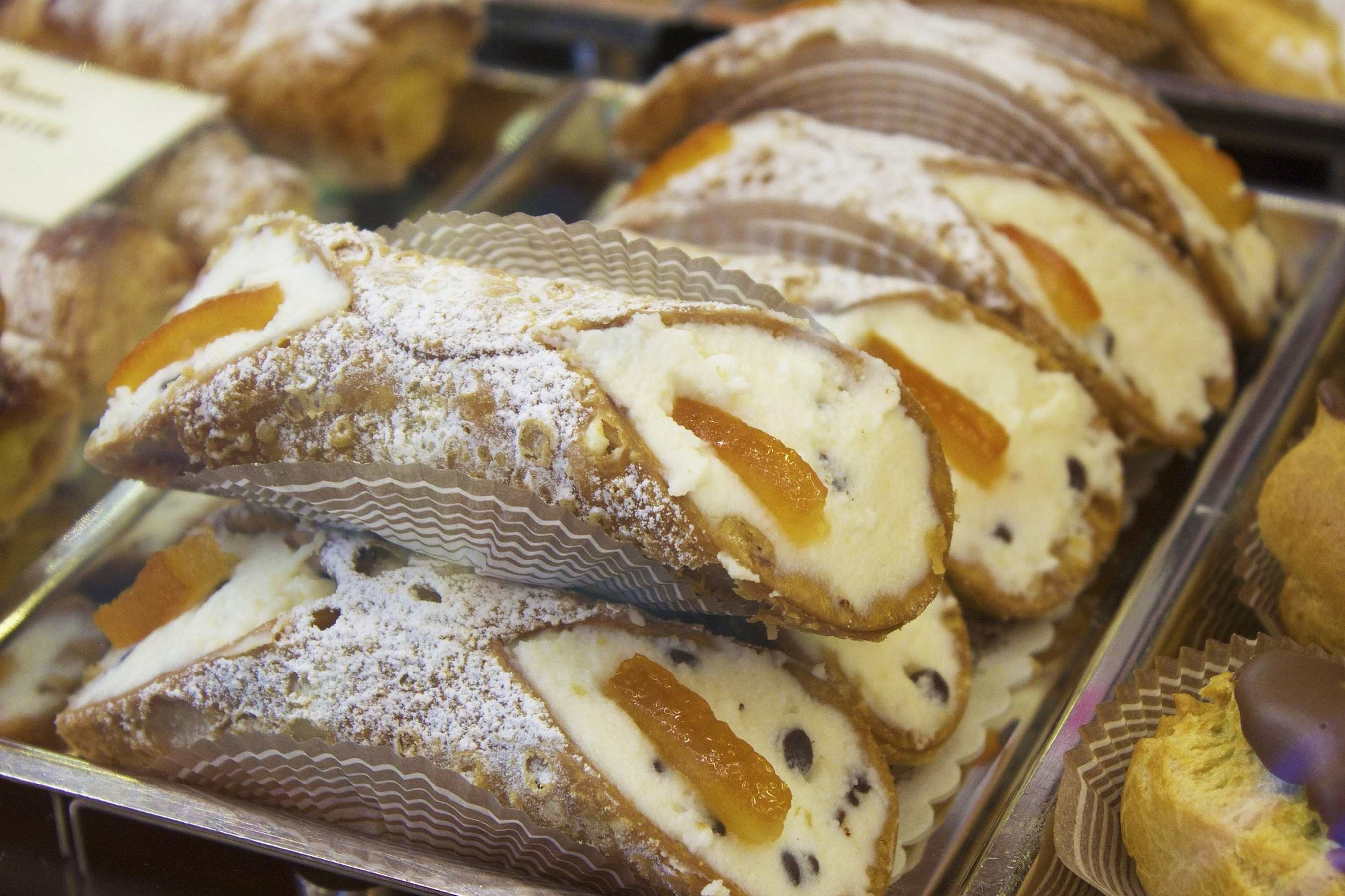 Make no mistake: Sicilian cannoli aren’t the oversized, goopy, stale, rather flavorless concoctions that we so often find stateside. Sicily does the pastry proud, deep frying each circle of pastry dough to a delightful crunch, then stuffing it with richly sweetened, creamy ricotta cheese before sprinkling it with dried fruits or chopped nuts grown on the island. It was only on tasting a Sicilian cannoli that we truly understood one of the world’s best cinematic improv lines: the Godfather’s “leave the gun, take the cannoli.”

To taste some of Sicily’s top foods in the company of a culinary historian, join us on one of our Palermo Street Food tours. Or, for more on what to do in Sicily—other than eat—take a peek at our Things to Do in Sicily blog post.