A city forever frozen in time, Pompeii’s history is a melancholy paradox. The very event that gruesomely took Pompeii — Mt. Vesuvius’ eruption in 79 AD — preserved the daily comings and goings of the ancient city, allowing us to piece together its story. Excavations through history have given us touching images of an unavoidable tragedy, and reactions of the Roman people right up to their last moments; lovers in an embrace, hurried escapes, bread still in the oven.

While devastating, it is pretty remarkable how we can still very much feel the bustling city of Pompeii. Stand in the middle of this Roman wonder, and you’ll be transported back 2,000 years. You might see the stepping stones used by Pompeians to avoid dirty debris and rain on the streets. On this same street, you might notice marks made by the wheels of chariots, owned by a wealthy resident. Walk through Pompeii, and you’ll notice a city not unlike yours — bakeries, markets, courtyards, graffiti, and murals.

For a city that lived so long ago, teeming with people that feel so distant from us, you might be surprised at how much we have in common with them. If you're ready to learn more about the Pompeii eruption, Mt. Vesuvius, Pompeii history, and more, you can check out our online seminars or travel with us in person. We even offer a full day Pompeii tour for kids!

Till then, we’ll let these mind-boggling facts guide the way. 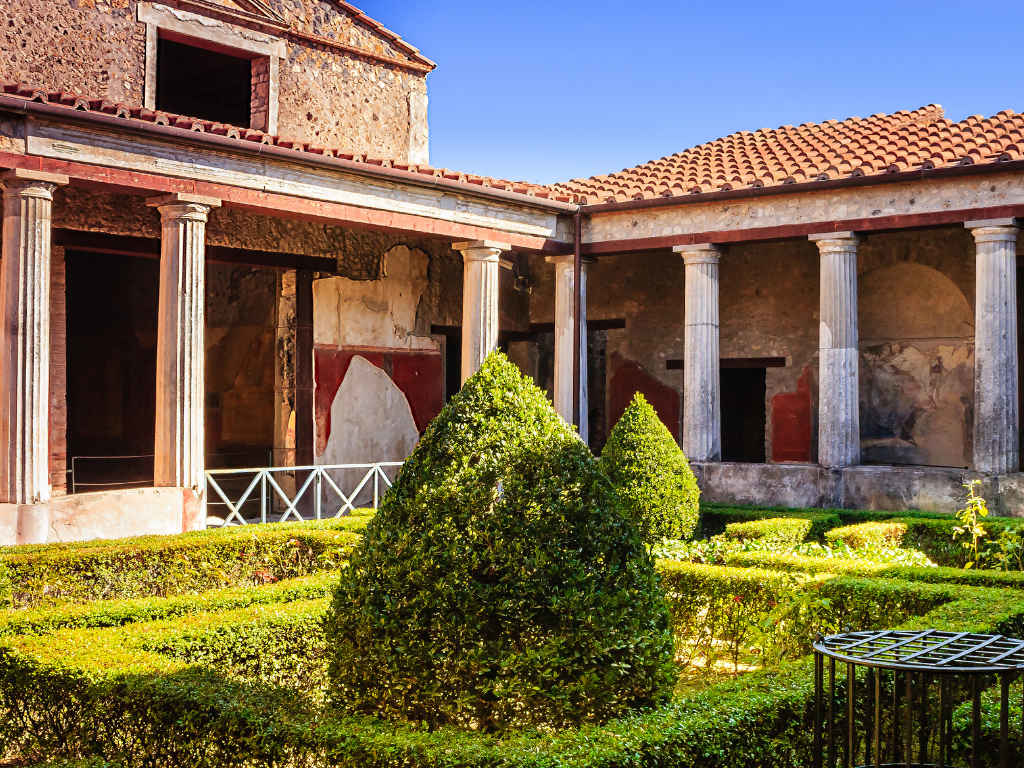 An excavation at Regio V uncovered Vicolo dei Balconi, an area of Pompeii that boasted impressive houses (some with balconies included). Archeologists also found coins, thoroughbred horses with bronze and iron accessories, and well-preserved frescoes and murals of mythological characters. Many of these artworks, like the renowned Sapphos painting in the Archeological Museum of Naples, suggest many of those buried underneath the volcano’s eruption were members of Pompeii’s high society.

Of course, a city full of lavishness can’t be without its vices. Brothels and gambling artifacts were also procured at excavation sites.

2. August 24th may not be Pompeii's actual eruption date 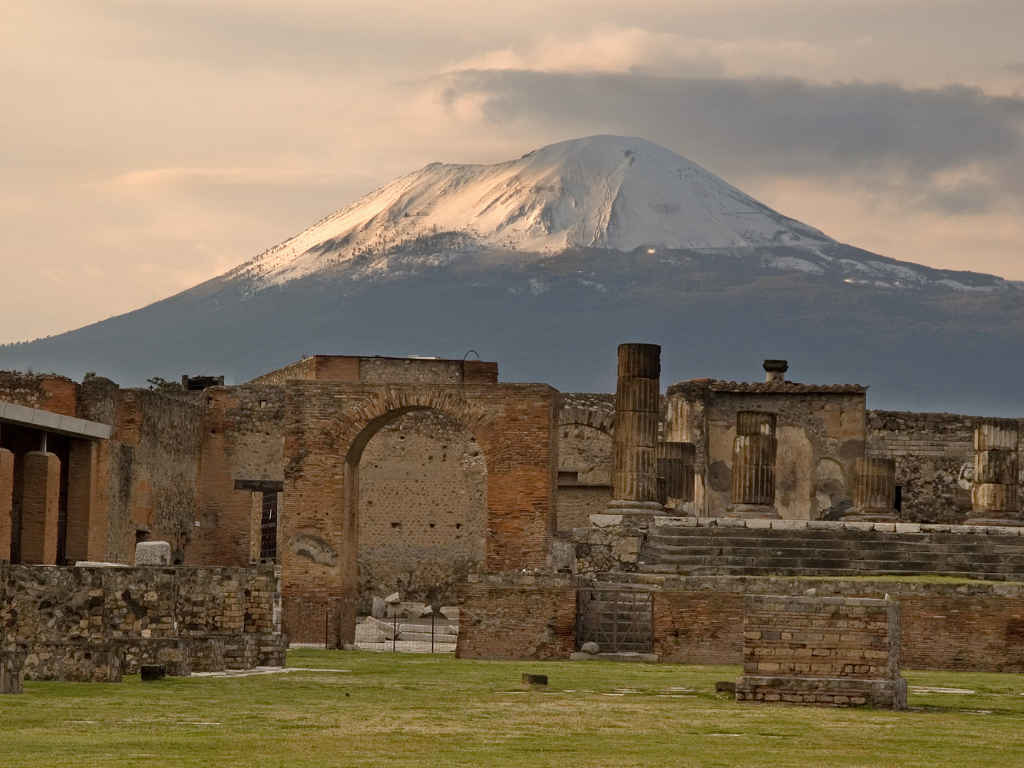 Before recent findings, August 24th 79 AD was thought to be the exact date Pompeii’s eruption occurred. Not so! The widely held belief has been disproved by curious finds that allude to a more autumnal setting. Market stalls that held common fall foods like chestnuts, unripe pomegranates, and harvested wine, as well as other findings like warmer clothing on the Roman people, heaters, and inscriptions all date the event closer to October or November.

3. The soil in Pompeii was black

The eruption at Mt. Vesuvius that decimated Pompeii on that fateful day certainly wasn’t its first, nor would it be its last (more on that later). Farmers that tilled the fertile earth may have sensed the foreshadowing of the city’s imminent demise as the black soil was indicative of earlier eruptions from the volcano.

4. Pompeii was a cosmopolitan city where the Greek language was potentially used alongside Latin

A skeletal analysis at a burial site in Pompeii found a 60ish-year-old man who was thought to have spoken Greek in theatre performances. This could be evidence of a more cosmopolitan landscape in the ancient city with different ethnicities congregating together.

Did you know that Greece had its own version of Pompeii’s eruption from the Santorini Volcano? Learn more here.

5. The people of Pompeii had fantastic teeth 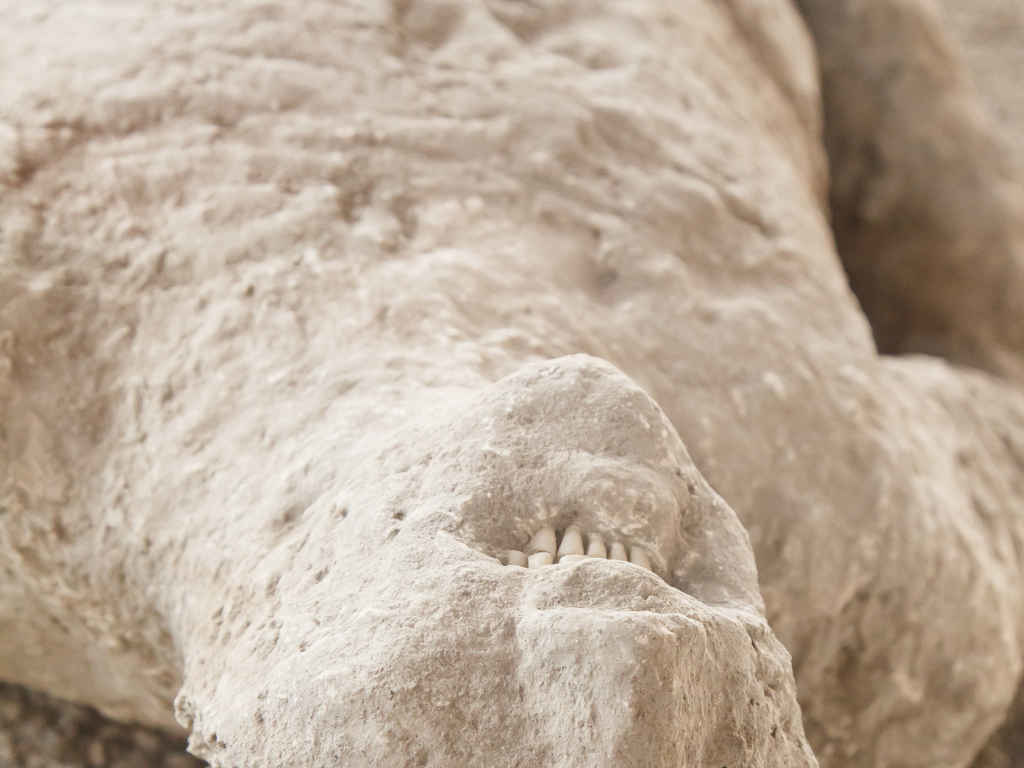 True to the politicians that some of them were, the people of Pompeii had stunning smiles. Their secret? A fiber-rich, low-sugar diet that prevented cavities and kept those gums healthy. Also found at the Vicolo dei Balconi were amphorae, vessels made out of terra-cotta that were used to contain wine, oil, and garum (fermented fish intestines). Save yourself a trip to the dentist and learn from the Pompeians.

6. These Romans in Pompeii loved to go out to eat 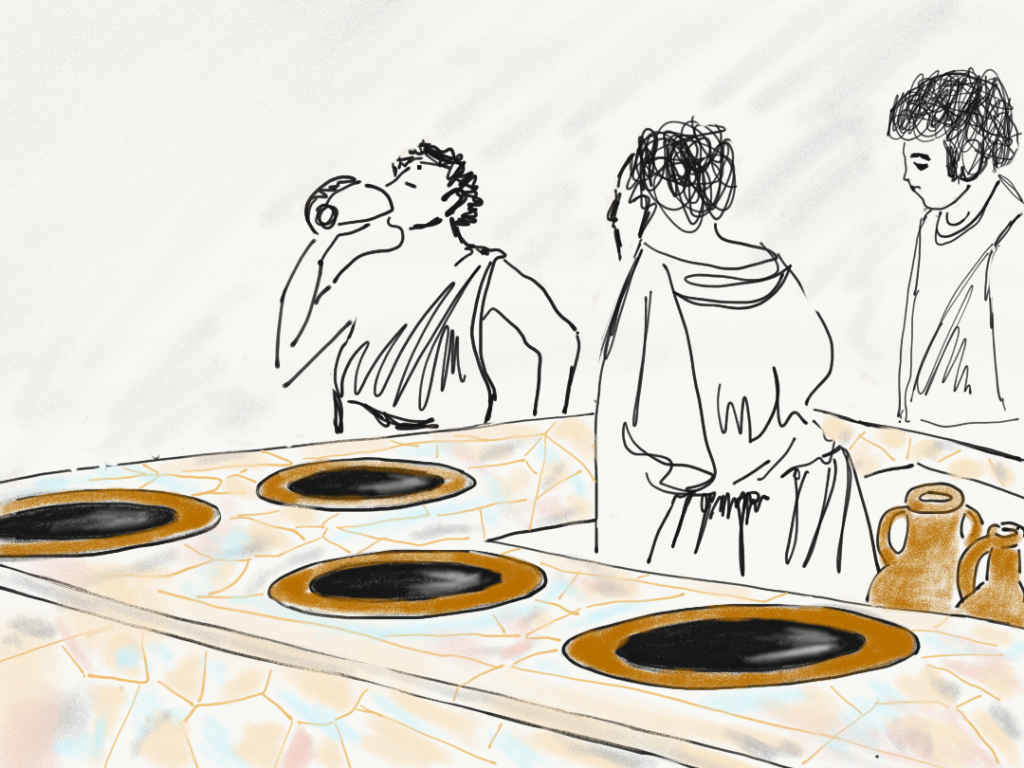 Known for their affinity for wine, cheese, and olive oil, Romans and their fine dining may not be as surprising of a fact, but it is uncanny to feel a certain kinship with their eating habits. 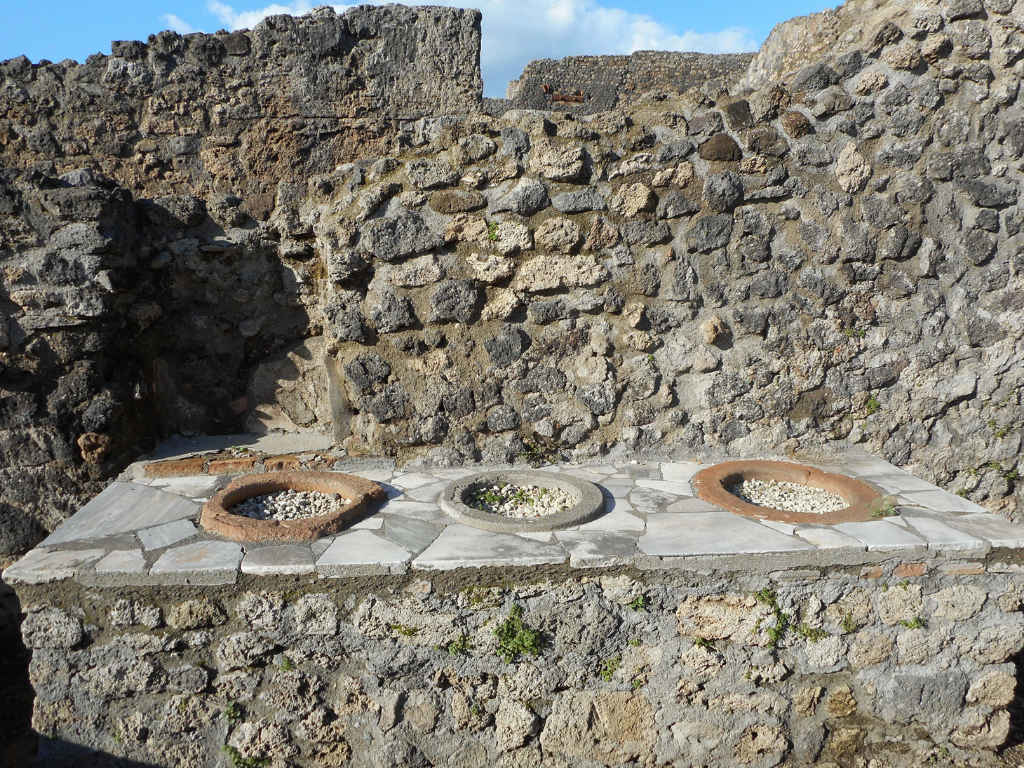 According to our expert on Pompeii’s history, Fiorella Squillante, it was common for people to eat out for their midday meal at what were called thermopolia, or snack bars. A thermopolium is a counter that opened out onto the street with big jars containing food and drinks. One of them has been recently available to the public! Did you know you could see them yourself with our half day tour of Pompeii? You can also tour Naples in a day with Fiorella. 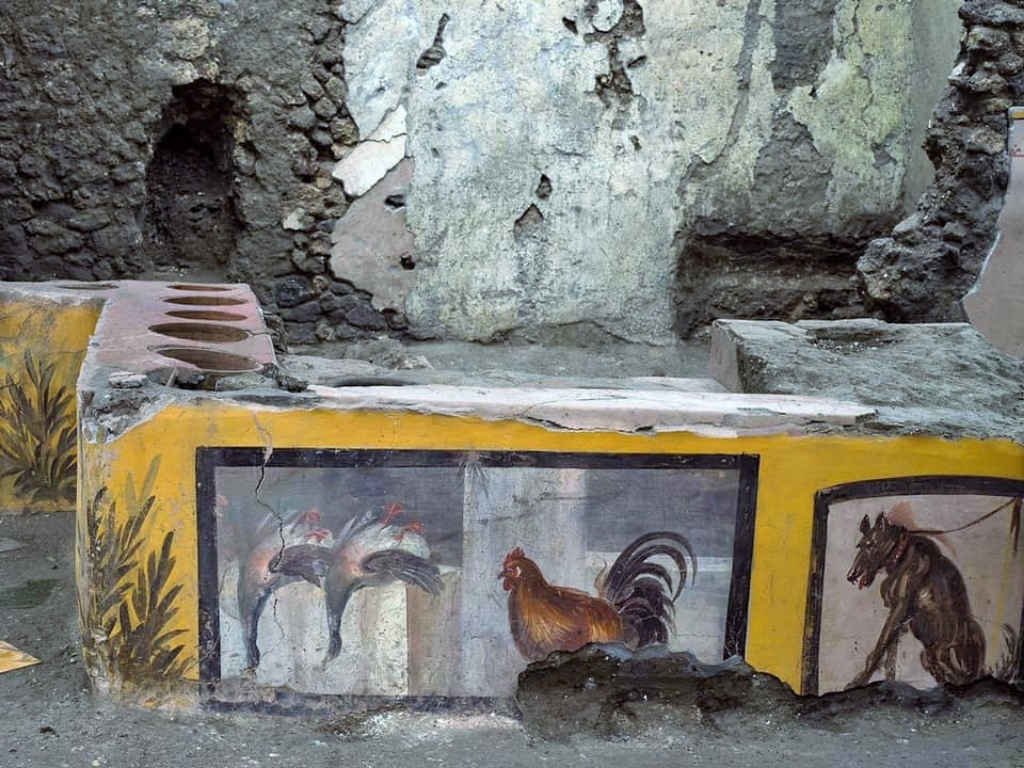 By now, you know about the city covered in the volcanic ashes of a deadly eruption at Pompeii, preserving (almost too well) the narrative of a city. But what are the details of that narrative? We’ll outline some specifics below. 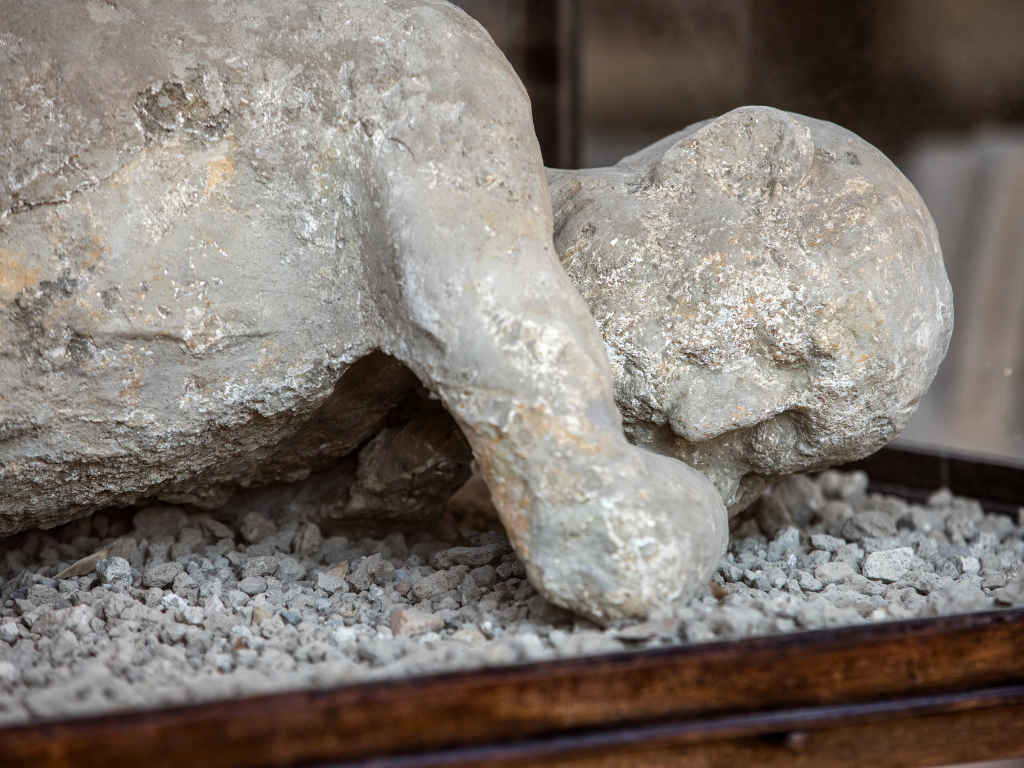 One set of skeletal remains of a man indicate that he was beheaded while escaping the molten heat. Originally, researchers believed that this man was hit by a flying rock. Upon further inspection, they deduced from a limp in his leg that he actually may have stayed home, dying instead by lethal gases. The flying rock could have been a doorjamb propelled by a strong volcanic cloud. 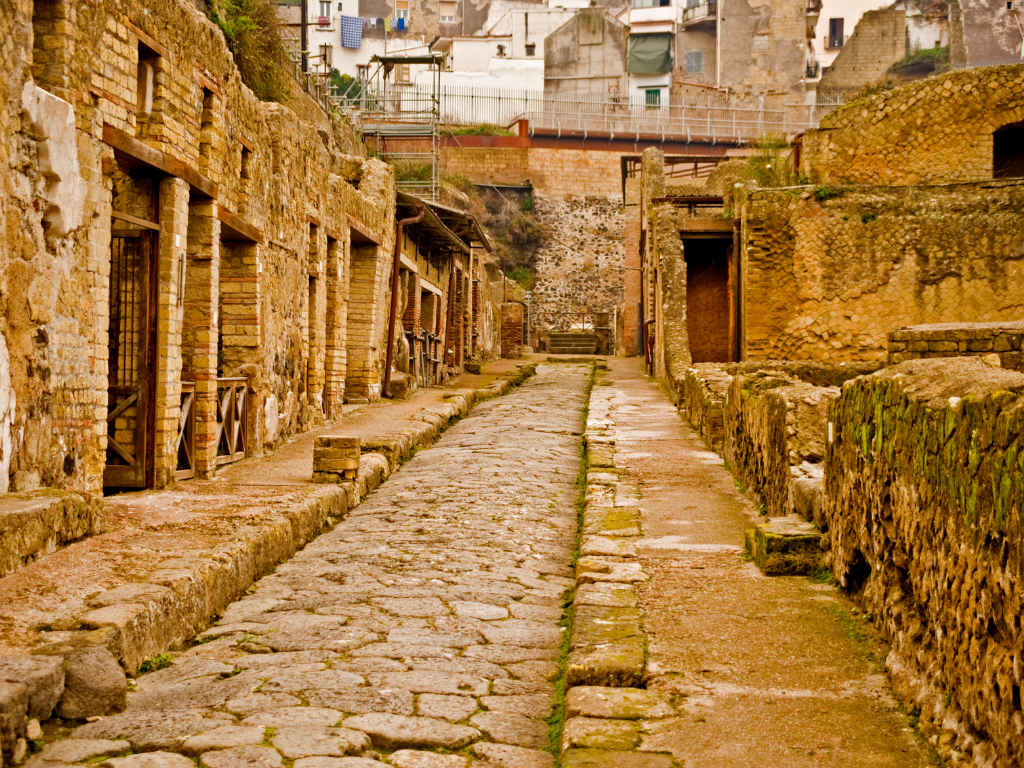 8. The nearby Herculaneum was also impacted by Mt. Vesuvius and its' eruptions

Herculaneum was also a vibrant city at the bottom of Mt. Vesuvius. With rich villas and luxurious baths, the city of about 5,000 was a summertime destination by Romans. It was actually discovered before Pompeii in 1709 (Pompeii was discovered in 1748). Learn more about Herculaneum and Mt. Vesuvius on our full day archaeology tour in Naples.

9. What we know of Pompeii came from letters by Pliny the Younger 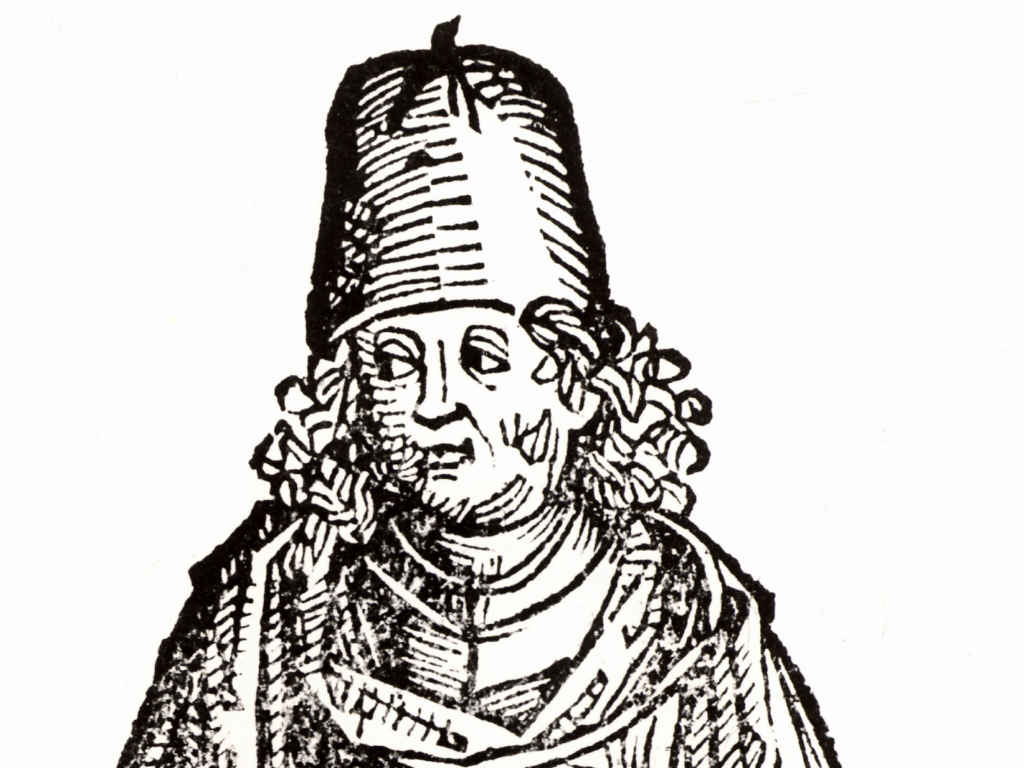 Before recent excavations, what we knew of Pompeii came from letters from Pliny the Younger, a 17-year-old boy who lived along the Bay of Naples at the time of the eruption. The letters were addressed to a historian named Tacitus, and they detailed the horrific events that occurred. Pliny the Younger wrote about Romans defending themselves by covering their heads, the awful toxic cloud, wails and prayers.

10. His uncle, Pliny the Elder, was a commanding officer and helped in escape efforts

A commander of the Roman fleet, the heroic officer used his boats to see what was going on at Mt. Vesuvius and to mitigate the ensuing panic, but he unfortunately died from toxic gases. 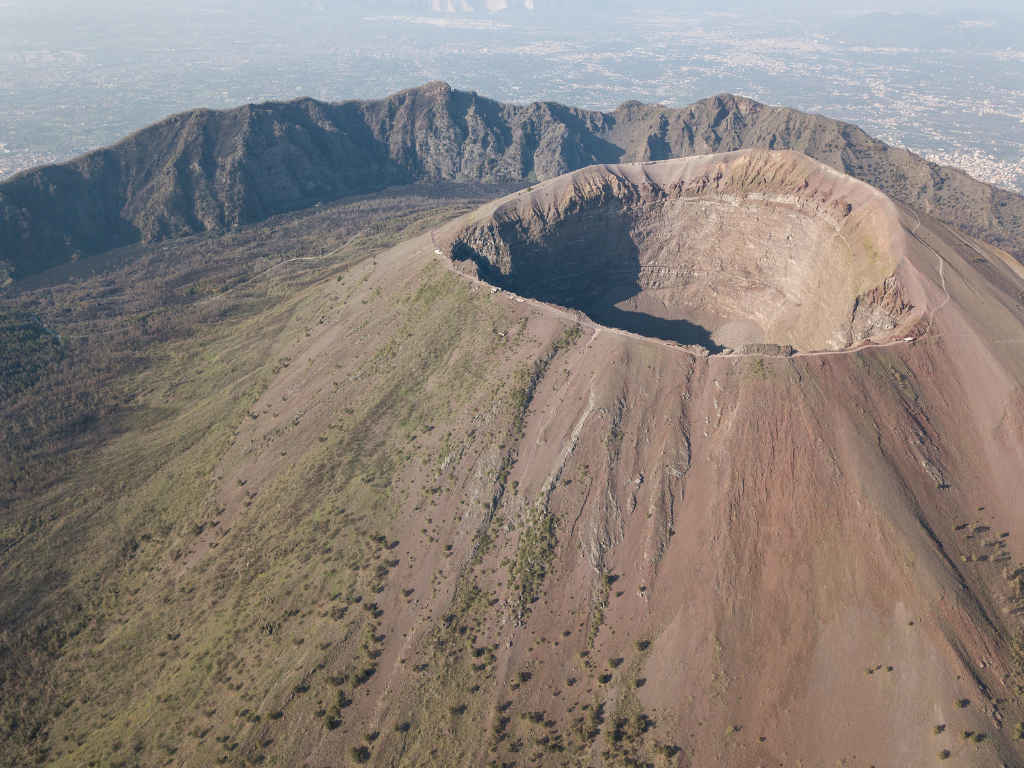 Far from dormant, the deadly volcano poses a threat to nearby civilization to this day. The last eruption was in 1944. Even though it was a particularly stressful time for chaos (being four years into World War II), residents of the nearby San Sebastiano village and Allied soldiers acted quickly to evacuate. While there were no military deaths, 26 Italian civilians were killed and almost 12,000 people were displaced.

The last major eruption of Mt. Vesuvius wasn’t nearly as fatal as the one during Pompeii’s time, however, it took nearly 3,000 to 6,0000 lives and triggered multiple earthquakes as well as a tsunami.

Thinking about traveling to Italy? Learn #withContext before you go, while you're there, and when you return?

Get a comprehensive view with one of Context's private or small group tours in person in Naples, or a different city in Italy! If you're planning and preparing for an eventual trip, learn with our scholars online in the world of Context Conversations ahead of packing your bags.

Tours you'll want to check out:

Experts
Where does the word Caucasian come from?

This March In Context: Fascinating Virtual Seminars You Will Love