10 Facts about Michelangelo’s Statue of David in Florence, Italy

Italy is reopening its borders and it's time to start planning your next trip. Whether you're using our seminars to enhance your itinerary, to learn more about Michelangelo, or the Statue of David, we've got you covered from start to end.

Valentino, Marcello, and, yes, Fabio—even in a land of uomini so famously handsome they go by first name only, not one has yet eclipsed the splendor of Michelangelo’s David. Oft-cited as the world’s most beautiful —and chiseled—man (and undoubtedly one of its most recognizable sculptures), David was crafted from 1501-1504, when Michelangelo was just 26 years old. Though Michelangelo’s genius as a sculptor had already been proven two years earlier when he completed the Pietà for St. Peter’s Basilica in Vatican City, it was the David that made the young artist famous. Even today, 500 years after its completion, that fame endures, drawing curious travelers from around the world to Florence for a glimpse of greatness. 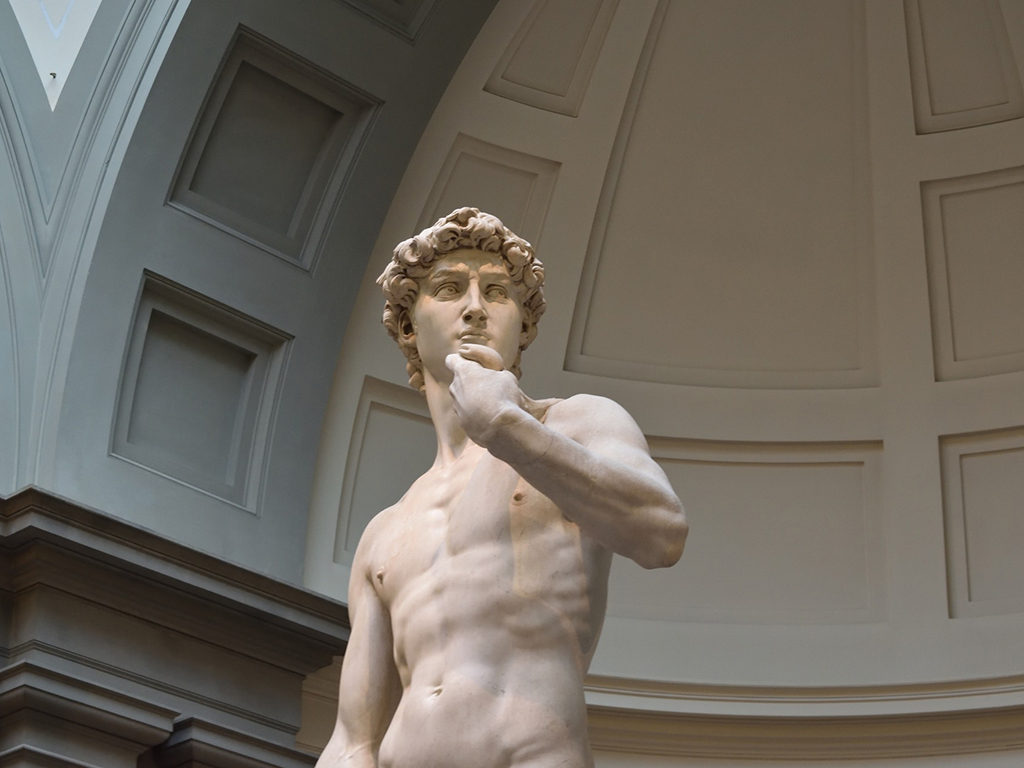 As frequent visitors ourselves (the Statue of David is a highlight of our Michelangelo in Florence tour), we’ve amassed quite an array of, well, context, about this Michelangelo masterwork. Thanks to our Florentine art historians, these are a choice ten facts about the Statue of David that give you a peek behind its perfect veneer:

1. It is roughly the size of a 2-story building, or an adult giraffe

Michelangelo drew inspiration for this sculpture from the Biblical story of David, the tale  of a young shepherd boy who saved the Israelites by slaying the warrior giant Goliath wielding only a sling and a handful of stones. This classic underdog tale stars a feeble boy, but Michelangelo David is a pinnacle of male perfection. The “lithe” youth weighs nearly 12,500 pounds and stands a staggering 17 feet high (for the visual learners out there, that’s roughly the equivalent of a 2-story building, or an adult giraffe). The statue’s size is the result not of an overblown artistic ego (though Michelangelo was notoriously temperamental), but of simple logistics: originally intended for placement in a ceiling niche of the Florence Cathedral, the sculpture had to be sizeable enough to be viewed from the pews below. 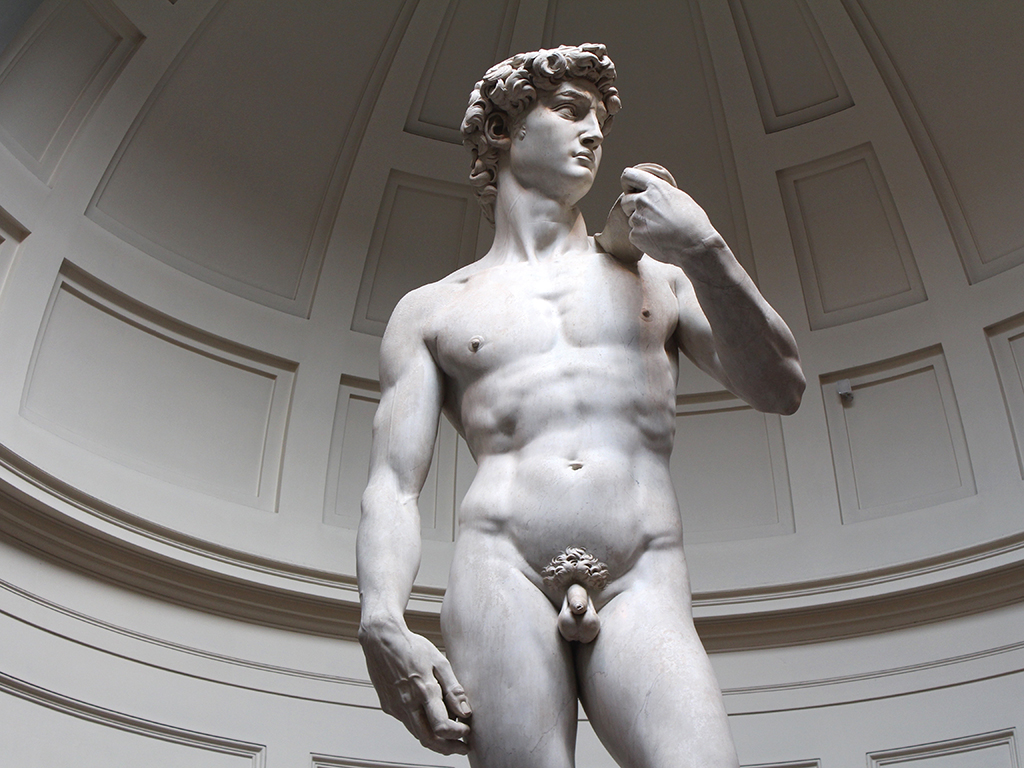 2. There are 30 life-sized replicas of David around the world

If imitation is the purest form of flattery, Michelangelo would be blushing: the Statue of David has been reproduced in countless ways, from pictures in coffee-table art books, to small replicas of every shape and color, to kitchen aprons (you know the ones). In addition to trinkets, there are also 30 life-sized replicas of David around the world, with the most famous of them in Florence itself. The first is in the Piazza della Signoria in front of the Palazzo Vecchio, where the David statue was originally erected; the second stands in the Piazzale Michelangelo and is cast in bronze. 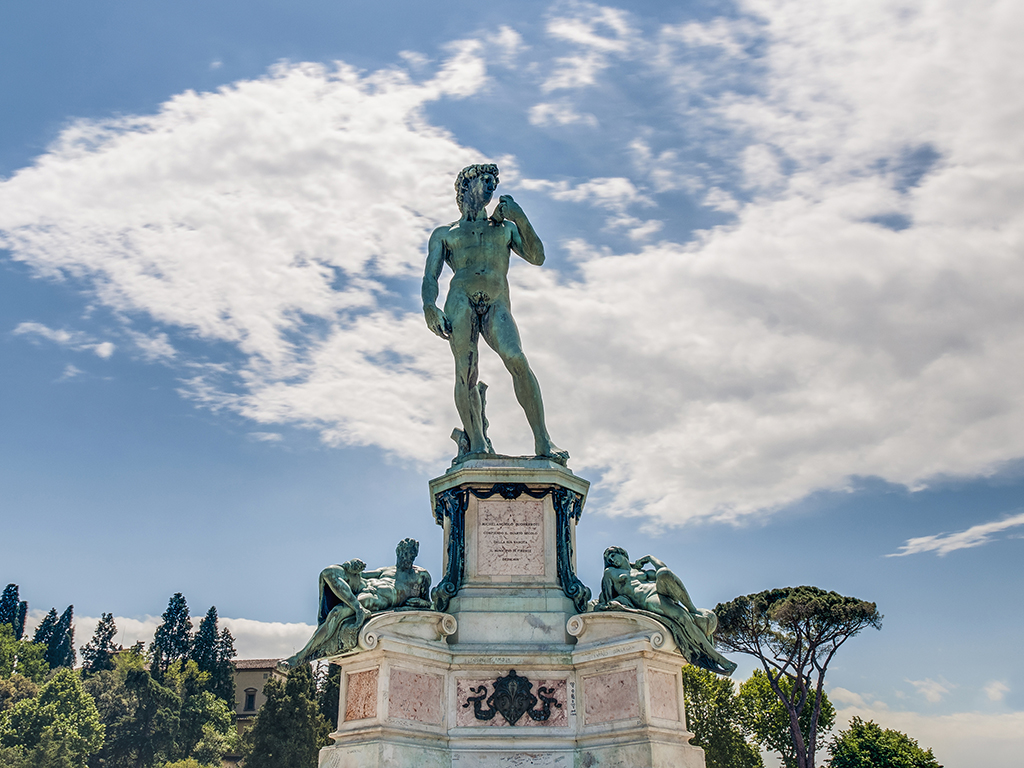 One of our favorite replicas is in England, sent as a gift from the Grand Duke of Tuscany to Queen Victoria in 1857. However, when the Queen was presented with the sculpture, she was horrified, the statue’s full nudity a deep affront to her Victorian sensibilities. The Queen was so distressed, in fact, that a fig leaf was cast out of plaster to preserve the statue’s modesty and protect the prim ladies of the court. This replica of David is still on display at the Victoria and Albert Museum in London.

3. David pre-dates Michelangelo: it was merely a rough slab of marble for ~35 years, deemed unusable for a sculpture until Michelangelo worked his magic

The Statue of David was originally commissioned in 1464 by the Opera del Duomo, as part of a series of large statues for the Florence Cathedral. These were meant to be sculpted on the ground, then raised roughly 260 feet into niches of the cathedral’s tribunes.

The project was initially awarded to Agostino di Duccio, despite his lack of experience with large-scale sculpture. Duccio traveled to the nearby quarries of Carrara to select a marble block, but his inexperience led him astray: he hewed a tall but narrow block full imperfections, tiny holes, and visible veins. The quarry struggled to prepare and ship the massive block, and when it finally arrived in Florence, Duccio realized his error and gave up on the project. The block was untouched for 10 years until Antonio Rossellino tried to salvage the piece. He, too, quickly deemed the marble unusable, and the block lay in the courtyard of the Opera del Duomo for another 25 years.

4. The statue is disproportionate because of the marble block which was previously deemed unworkable

Michelangelo was a master of proportion, but when he accepted the commission to sculpt David in 1501, he inherited a block of marble two other sculptors had chipped, chiseled, and ultimately deemed unworkable. Certain characteristics of the Statue of David—notably his slender, twisted figure—are likely due to the shape of the marble before Michelangelo began working.

Because David was intended to be viewed from below, Michelangelo eschewed ideal proportioning and instead carved the head, arms, and hands much larger than the torso and legs. This creates the illusion that David is alert and poised for action, especially when viewed from below. The deeply furrowed brow is exaggerated, and the right hand is especially large, possibly as a nod to David’s biblical nickname manu fortis, or strong hand. 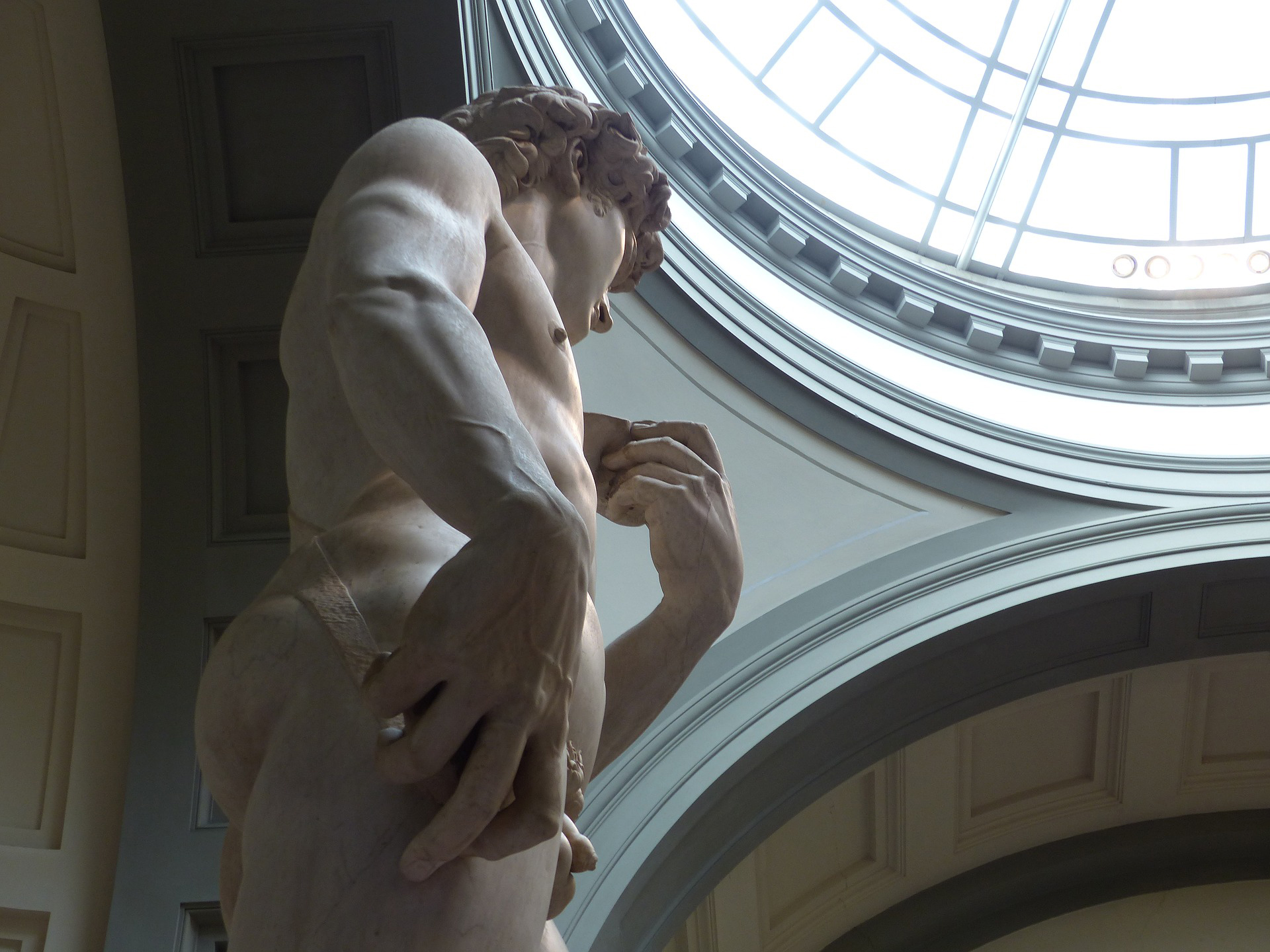 5. Michelangelo chose to break with tradition David, creating the statue without the head of Goliath

Michelangelo was passing well-trodden ground with a sculptural depiction of David, a subject also explored by great Florentine artists like Ghiberti, Verrocchio, and Donatello. However, fact, before Michelangelo, all representations of the biblical story focus on that moment of David’s victory, with the head of Goliath at his feet. Michelangelo chose to break with tradition, instead showing the moment before the battle. David is alert and concentrated, standing in classical contrapposto, with a surprisingly small and inconsequential slingshot over his left shoulder—a nod to the Renaissance ideal that man’s victories are due to intellect and confidence, not brute strength.

6. The Statue of David is slightly cross eyed - maybe intentionally

While the story of David hails from the bible, Michelangelo based the physical form of the statue on the tenets of ancient Roman sculpture—specifically, portrayals of the hero Hercules, long a symbol of the independent city of Florence. The Statue of David has been upheld as the symbol of perfection for hundreds of years, but Stanford’s Digital Michelangelo Project (one of our favorite recent efforts in art historical geekery) revealed that David is, in fact, slightly cross eyed. The statue’s left eye looks forward, while the right eye gazes at a distant point. Scholars’ going theory is that Michelangelo intentionally gave David this slight flaw to honor the ancient Roman masters and signify that his work wasn’t meant to usurp their place in the canon of perfection. 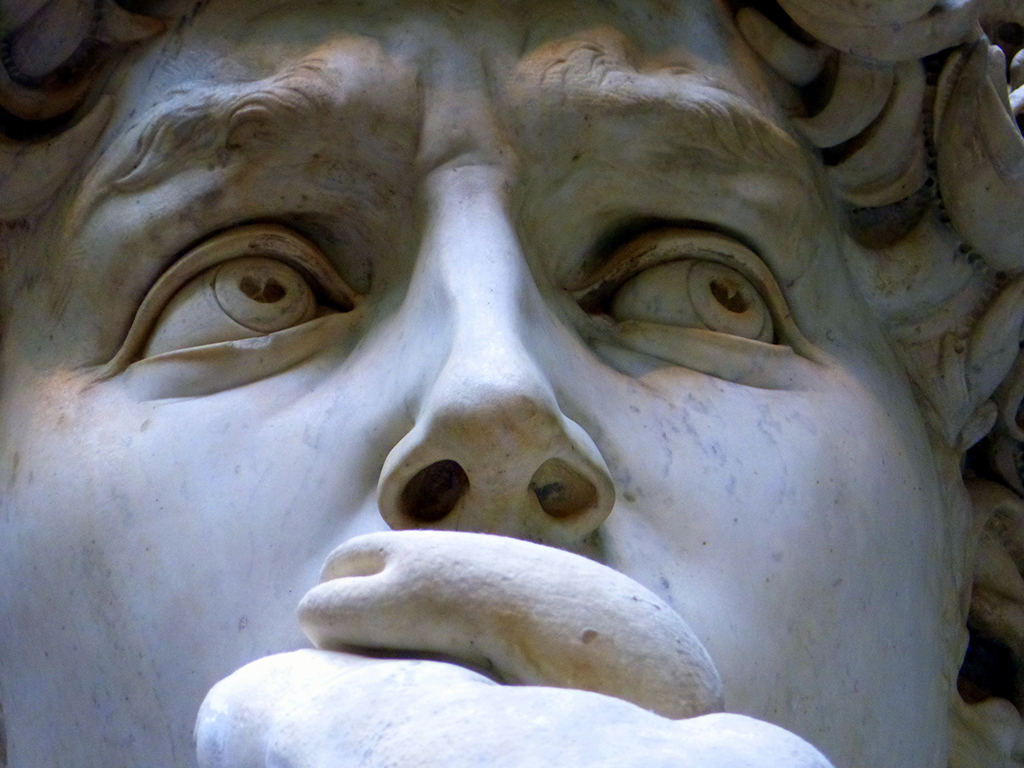 7. It took 4 days and 40 men to move the Statue of David half a mile from Michelangelo’s workshop to the Piazza

As the statue took form and an awe-inspiring David emerged from the marble, the committee decided this masterpiece was too beautiful—and too heavy—to be placed atop the cathedral. They elected to place the sculpture in the Piazza della Signoria, replacing Donatello’s Judith and Holofernes at the entrance of the Palazzo Vecchio.

It took four days and forty men to move the Statue of David just half a mile from Michelangelo’s workshop to the Piazza. The statue was suspended by ropes on a wooden scaffold, swaying gently as it was pulled and pushed along a series of trunks laid down across the cobblestones. Once it was installed on the pedestal, Michelangelo took his smallest chisels and finished the remaining details of his masterpiece on the very spot where it would stand for the next 369 years.

8. Although beloved by Florentines, the Statue of David has been damaged several times outdoors

The Statue of David was immediately beloved by Florentines, but that didn’t save the sculpture from damage. During its first year in the Piazza, David was hit with stones. Not long afterwards, in 1527, violent protesters rioting the rule of the Medici family flooded the Piazza. In the scuffle that followed, a bench was thrown from a window, breaking David’s left arm into three pieces. In addition to his famous scuffle with Goliath, David has battled earthquakes, lightning strikes, and pigeons during his extended sojourn outside.

At the urging of concerned citizens and art connoisseurs, David was moved inside the Galleria dell’Accademia in 1873. Even indoors and surrounded by museum security, however, David wasn’t completely safe. In a well-known 1991 incident, an Italian artist named Piero Cannata entered the Accademia with a small hammer concealed under his coat. Once near the statue, he sprang forward and started smashing David’s left foot, managing to shatter a toe before museum visitors subdued him. Now David is protected by Plexiglass, safe from hands and hammers.

Though the Statue of David might now be safe from human interference, it still faces risks. Florence is prone to seismic activity, and even slight tremors could further damage David’s delicate ankles (or, in a truly worst-case scenario, topple the statue altogether). All the more reason, we think, to make a visit as soon as possible (and, for those moved to contribute, engage with a preservation organization like the Friends of Florence).

10. The Statue of David embodies the city of Florence, symbolizing independence and strength in the perfect image of youthful beauty.

Michelangelo’s David took on new meaning shortly after its creation as both a symbol of the Renaissance and a representation of the city itself. The Florentine Republic faced Goliaths on all sides, both from the ruling Medici family, as well as the endless threats from powerful neighboring states. The statue of David came to symbolize the independence and civil liberties of the Florence, and David’s eyes cast a threatening glare in the direction of Rome, serving as a warning to any who dared challenge the city. Michelangelo created a symbol of independence and strength, coalesced in the perfect image of youthful beauty. 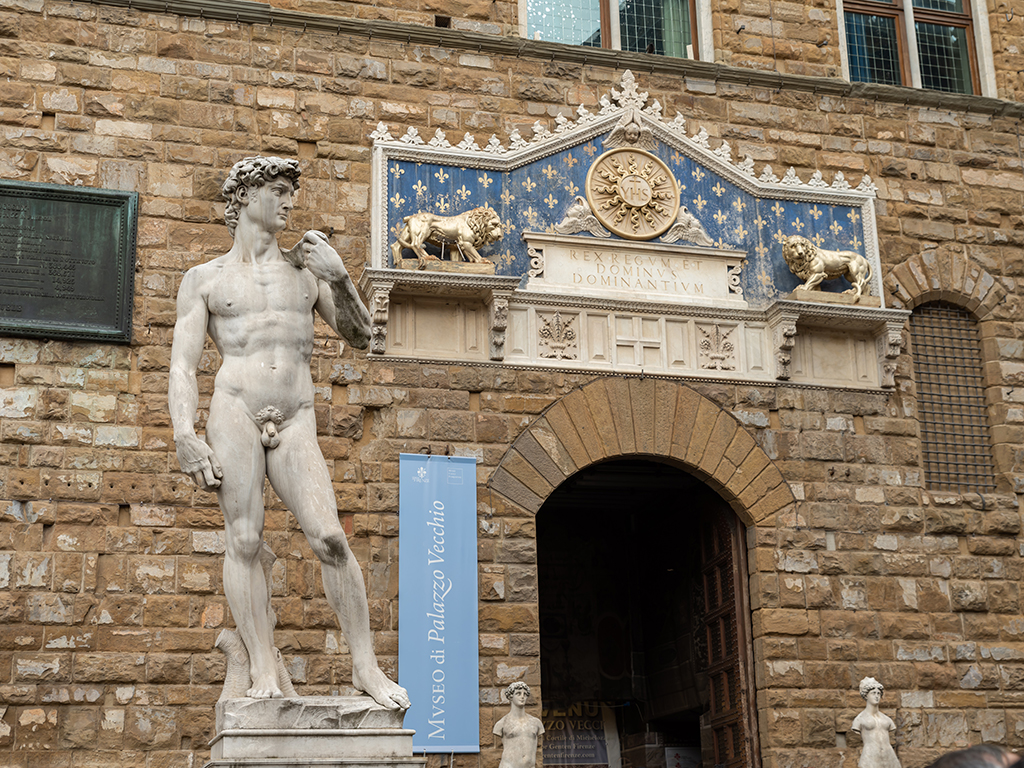 Next time you’re in Florence, take our Introduction to Florence: with Accademia and Michelangelo's David tour to learn more about Michelangelo’s David in the company of a PhD or MA-level art historian. To understand Michelangelo’s legacy in Florence and around the world, accompany us on our Michelangelo in Florence tour. Or, you can learn with our scholars from the comfort of your own home with our virtual, live taught courses and seminars.