What to Do in Athens with Kids

The historic city of Athens, the capital of ancient and modern Greece, is a great destination for families with kids. Visit centuries-old temples and ruins to learn about art, history, and the myths of Greek Antiquity; explore ancient political life in the birthplace of democracy; enjoy family-pleasing Mediterranean cuisine; relax in the city’s peaks and parks; and swim and sunbathe at the beaches along the Attica Peninsula. These are the top 14 things to do in Athens with kids. 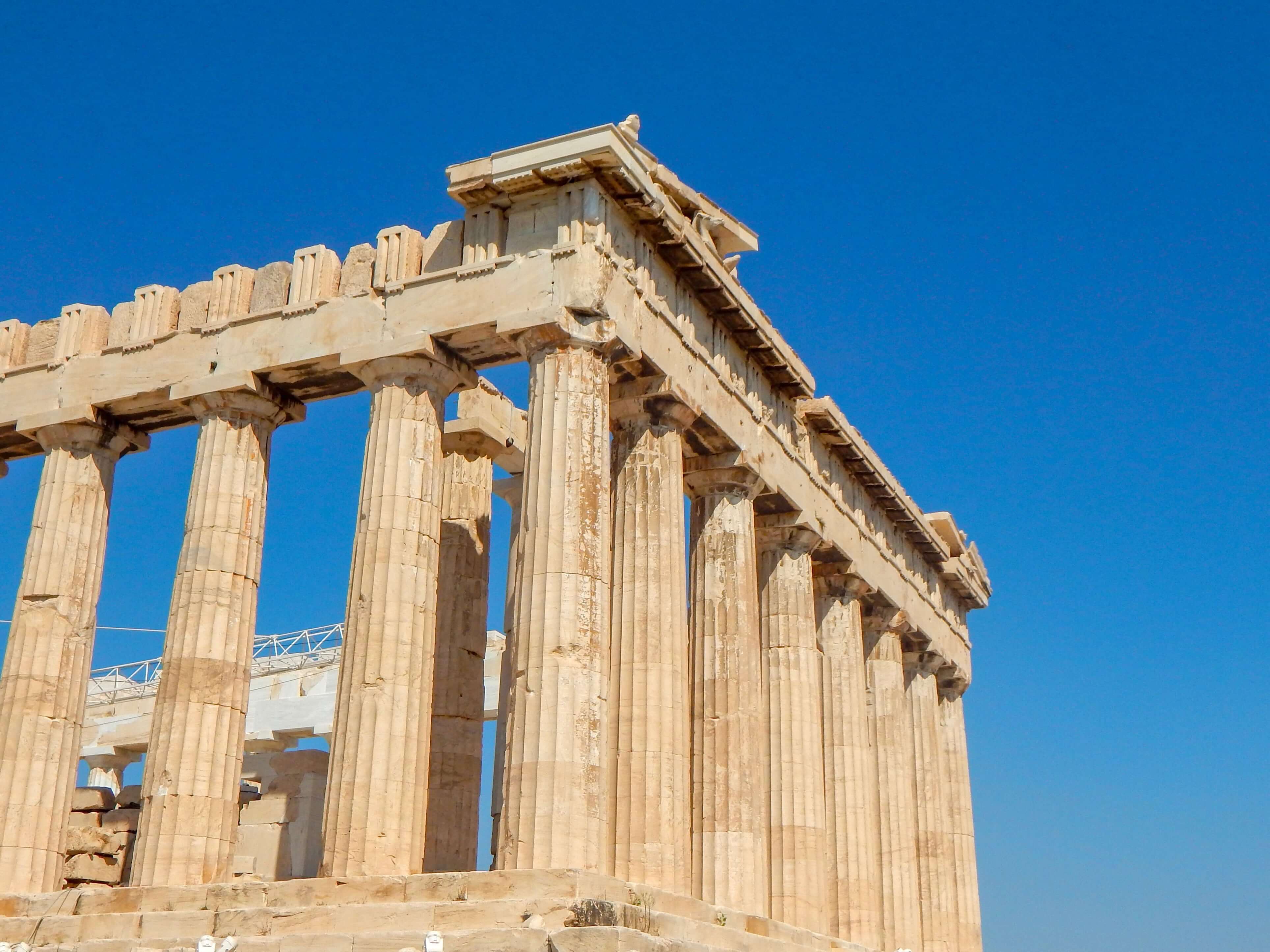 If you’re visiting Athens with kids, it’s almost a requirement to spend time among its ancient sites, which today serve as a living history lesson. Climb to the Acropolis—arguably the most iconic site in all of Greece—the 5th-century B.C. citadel overlooking the city. Brush up on your Greek mythology as you visit various monuments dedicated to the goddess Athena including the Temple of Athena Nike, the Odeon of Herodes, the Theater of Dionysus, the Erechtheion, and, of course, the Parthenon. There’s no doubt that these incredible sites can capture the imagination of visitors of all ages. Kids under 18 are free, but a word of caution to those with younger children—the ancient site is not stroller-friendly. As these sites are outdoors, we recommend going in the morning during the warmer months; the hill can get quite hot, so families should remember plenty of water and snacks. 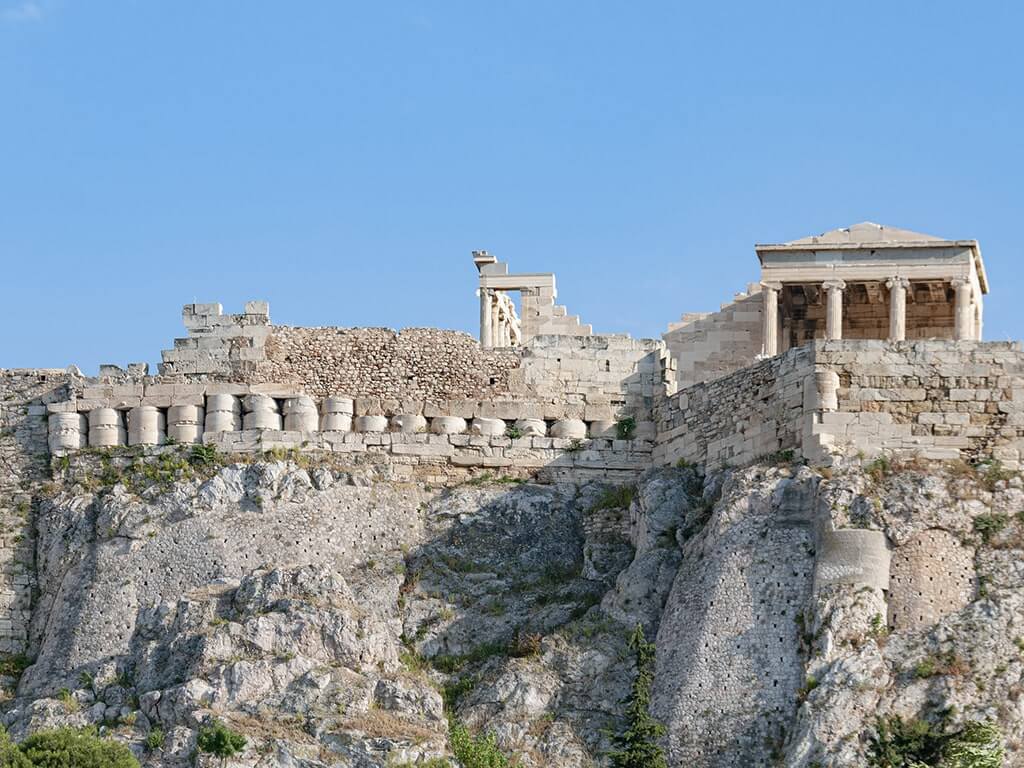 From the Acropolis, a short walk will bring you to the ancient Agora, which once served as the city’s commercial, political, and residential center. This is where the famous Greek thinkers would rub shoulders, the perfect place to introduce your family to the ideas of Plato, Sophocles, and Socrates, and travel back to the Golden Age of Pericles and the birth of democracy. The highlights in the Agora are the Temple of Hephaestus and the Stoa of Attalos, which was restored in 1956 and today contains a museum. 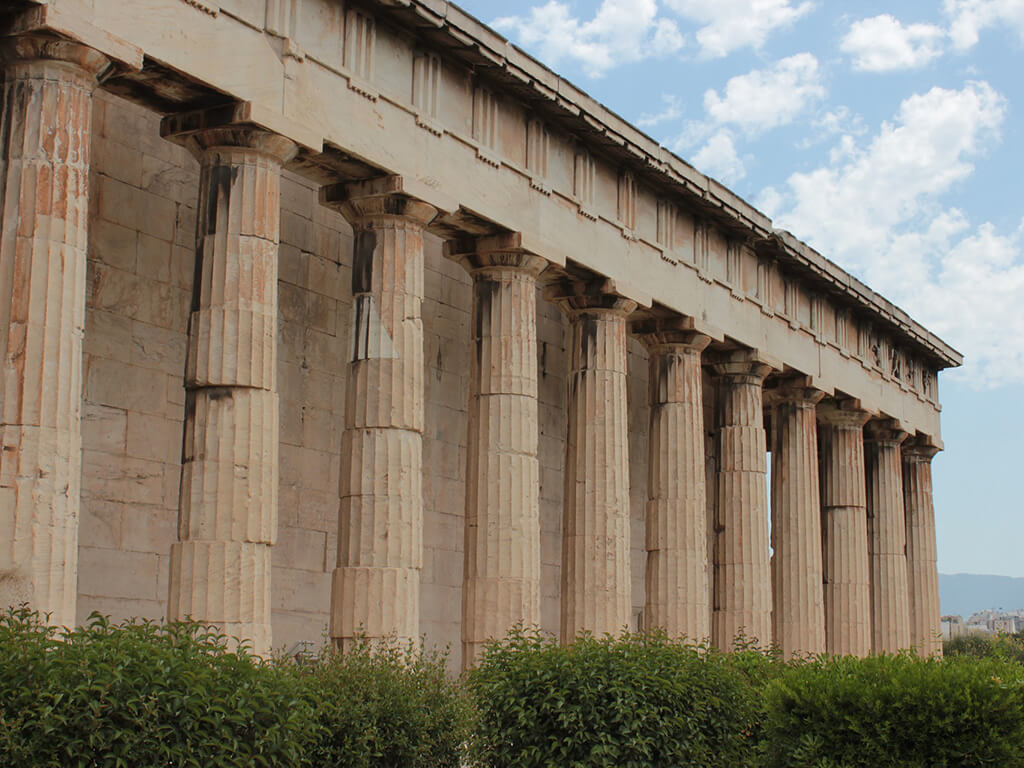 The spectacular Acropolis Museum is one of the best places to visit in Athens with kids. View the archaeological excavation of an ancient Athenian neighborhood through the museum’s glass floors on the ground level, and check out the model of the Acropolis made out of 120,000 LEGO bricks on the second floor. The museum offers family backpacks filled with educational resources, puzzles, maps, painting kits, and exhibition-based activities and games that encourage the whole family to work together to solve challenges as you explore the museum. 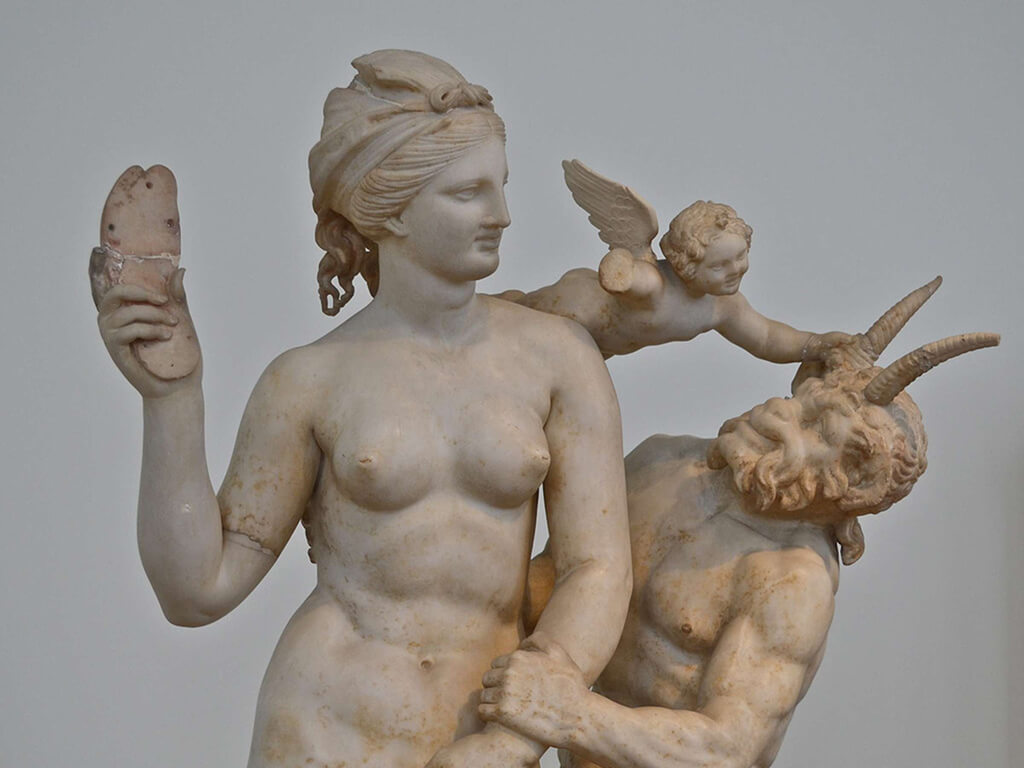 Immerse your family in ancient Greece at the National Archaeology Museum, the country’s largest museum. Carve out at least an afternoon to take in the treasures of Greek Antiquity. (You can also visit this museum on an expert-led, kid-friendly tour with Context.)  See ancient Greece through the lens of Greek mythology, or daily life in ancient Athens—the museum offers an ample collection for whatever your family’s interests may be. The museum has 11,000 exhibits, with impressive collections of Neolithic, Cycladic, Mycaenean, Egyptian and Cypriot antiquities, as well as unique metalwork, jewelry, vases, frescoes, and terracotta figurines. The museum houses one of the largest collections of Ancient Greek sculptures in the world. 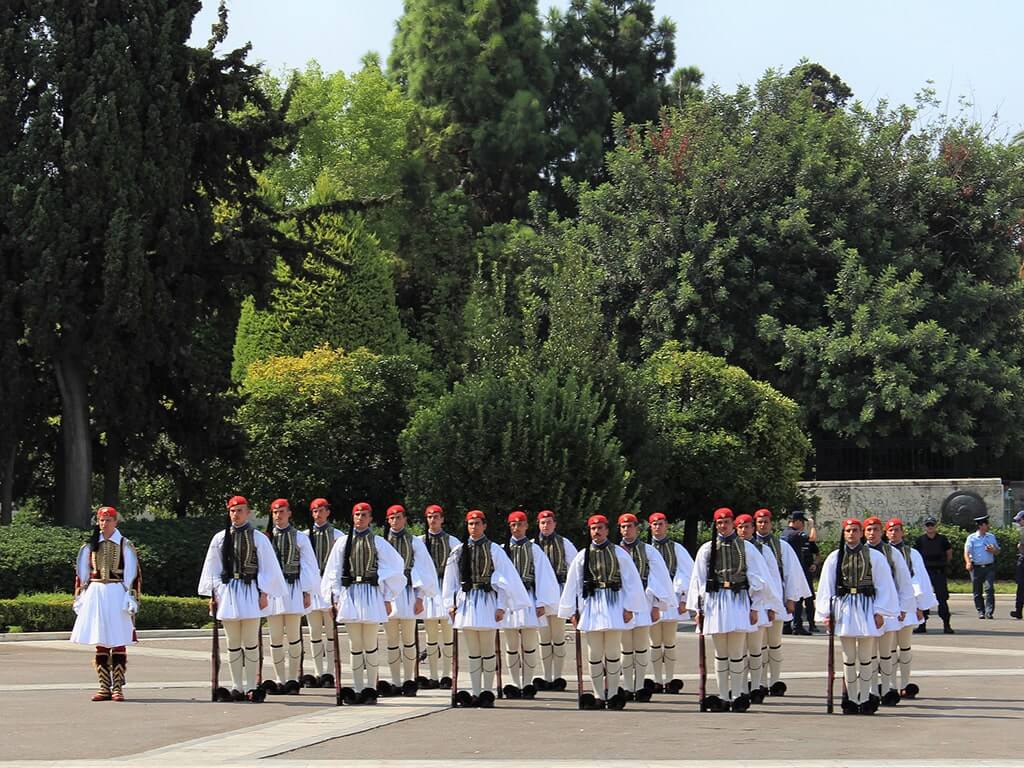 Historic Syntagma Square is worth a visit for families exploring Athens with kids. Children will be excited to see the changing of the presidential guard in front of the Tomb of the Unknown Soldier. It happens every hour, with the official ceremony taking place at 11:00 a.m. on Sundays. 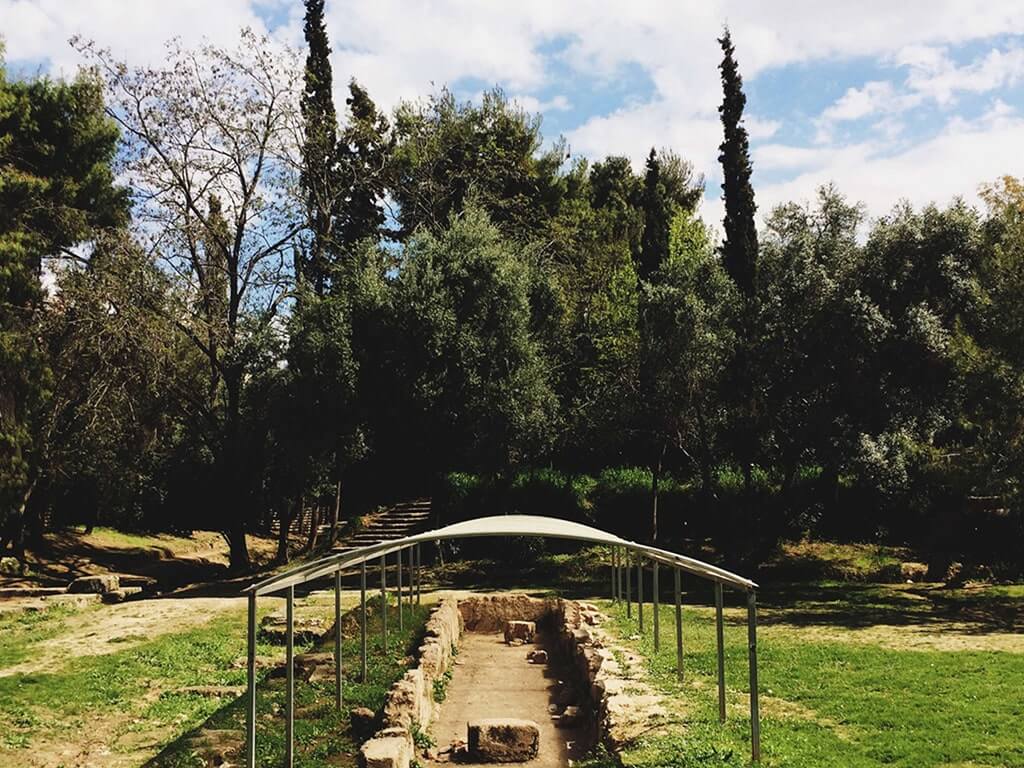 And just off the square, the verdant National Garden is a beautiful place to spend some time in Athens with kids. With a botanical garden that is home to 500 species of plants, flowers, and trees from around the world, a mini-zoo, a playground, and two duck ponds, the gardens are a great place to relax and unwind during your visit. Athenians often come to the public park to read, have picnics, and jog. The gardens also have a children’s library with reading rooms, a music and film room, and a fairy tale room. 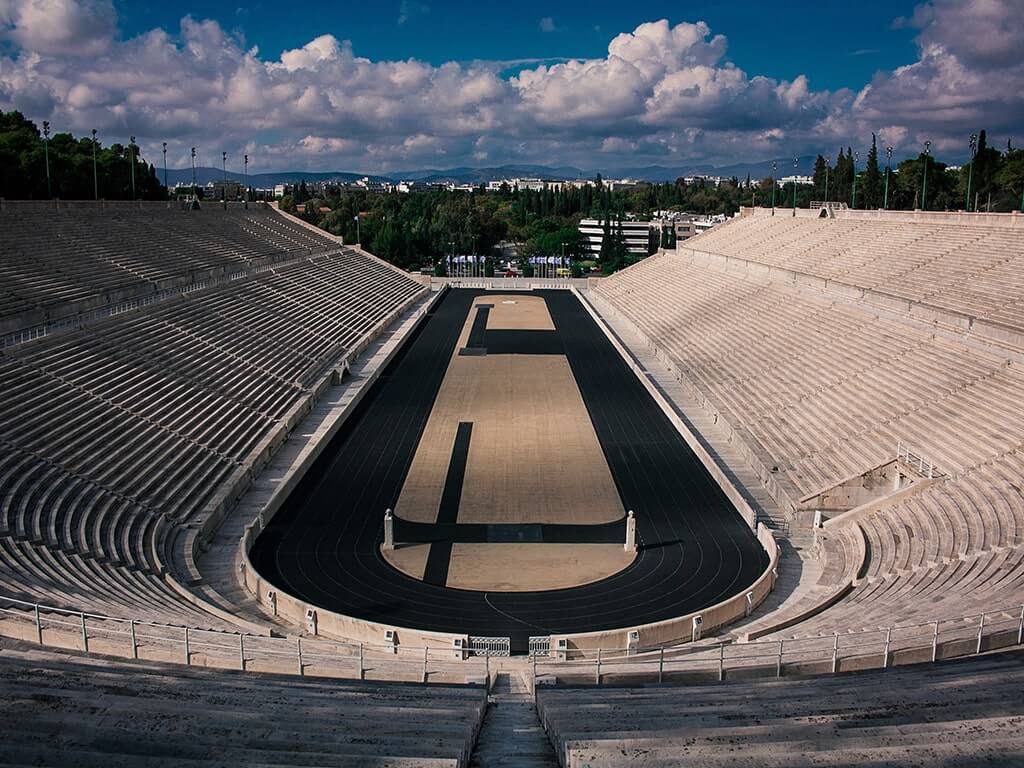 Next door to the gardens is the spectacular Panathenaic Stadium, one of the most significant monuments in all of Greece and a must-visit for families in Athens with kids. The stadium was the ancient site of the Panathenaic Games, one of the city’s major celebrations, during the 4th century B.C. It was then rebuilt entirely in marble in the 2nd century by the Romans, before falling into disuse in the 4th century with the rise of Christianity. The historic stadium was revived for the first modern Olympic Games in 1896, and it hosted the Olympics again in 2004. Families can learn more about the history of the stadium through an audio tour, and children can run around the track, literally in the footsteps of world-class athletes both ancient and modern. 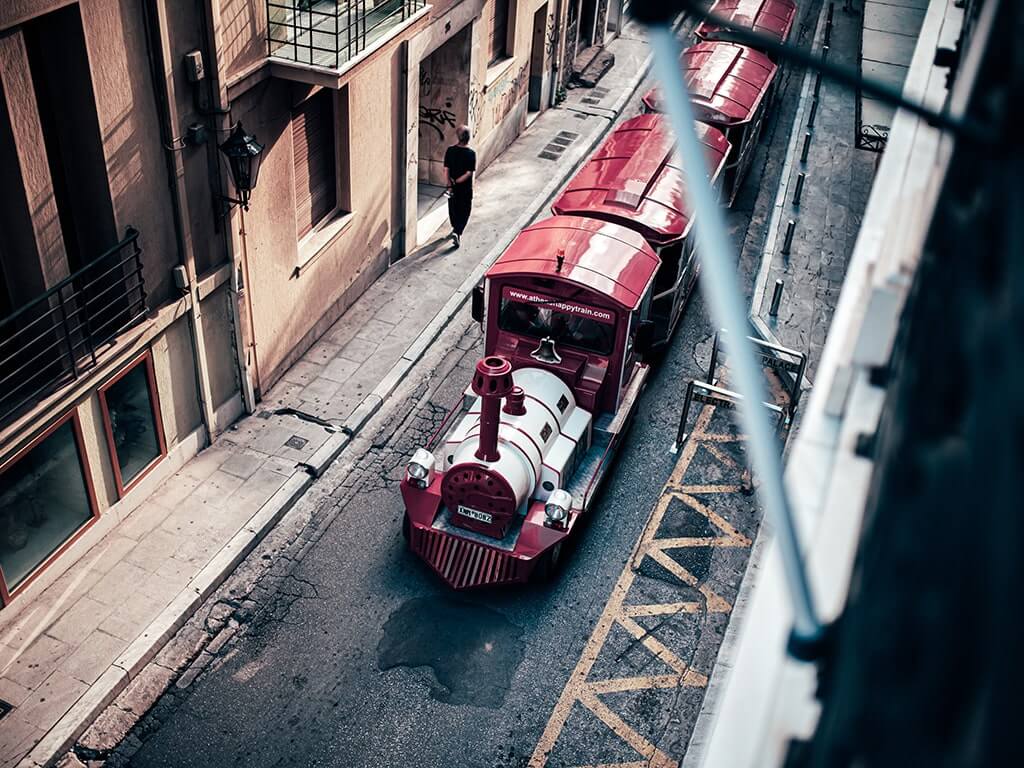 Another fun thing to do in Athens with kids is to ride the Happy Train from Ermou Street off of Syntagma Square. The red toy-like street train will take families on a 40-minute tour of some of the key landmarks and historic neighborhoods in Athens, including the Temple of Olympian Zeu, the Panathenaic Stadium, Hadrian’s Arch, the Museum of Cycladic Art, Monastiraki and Plaka. The tickets last for ten hours so you can hop on and off to visit the various sites at your leisure. 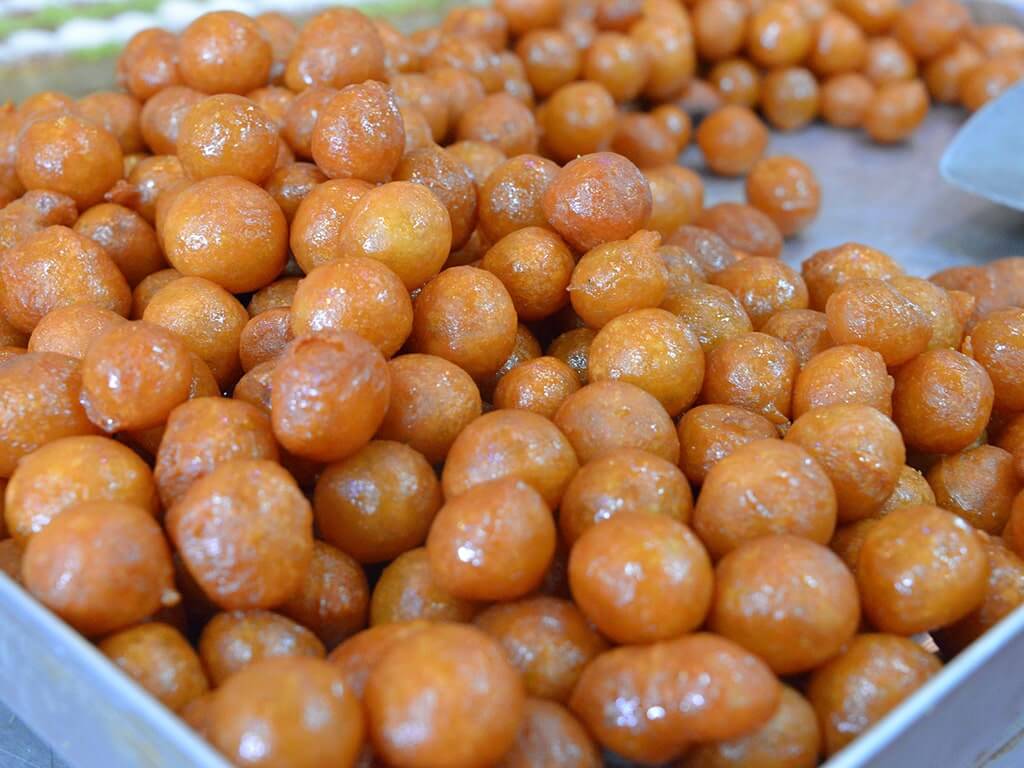 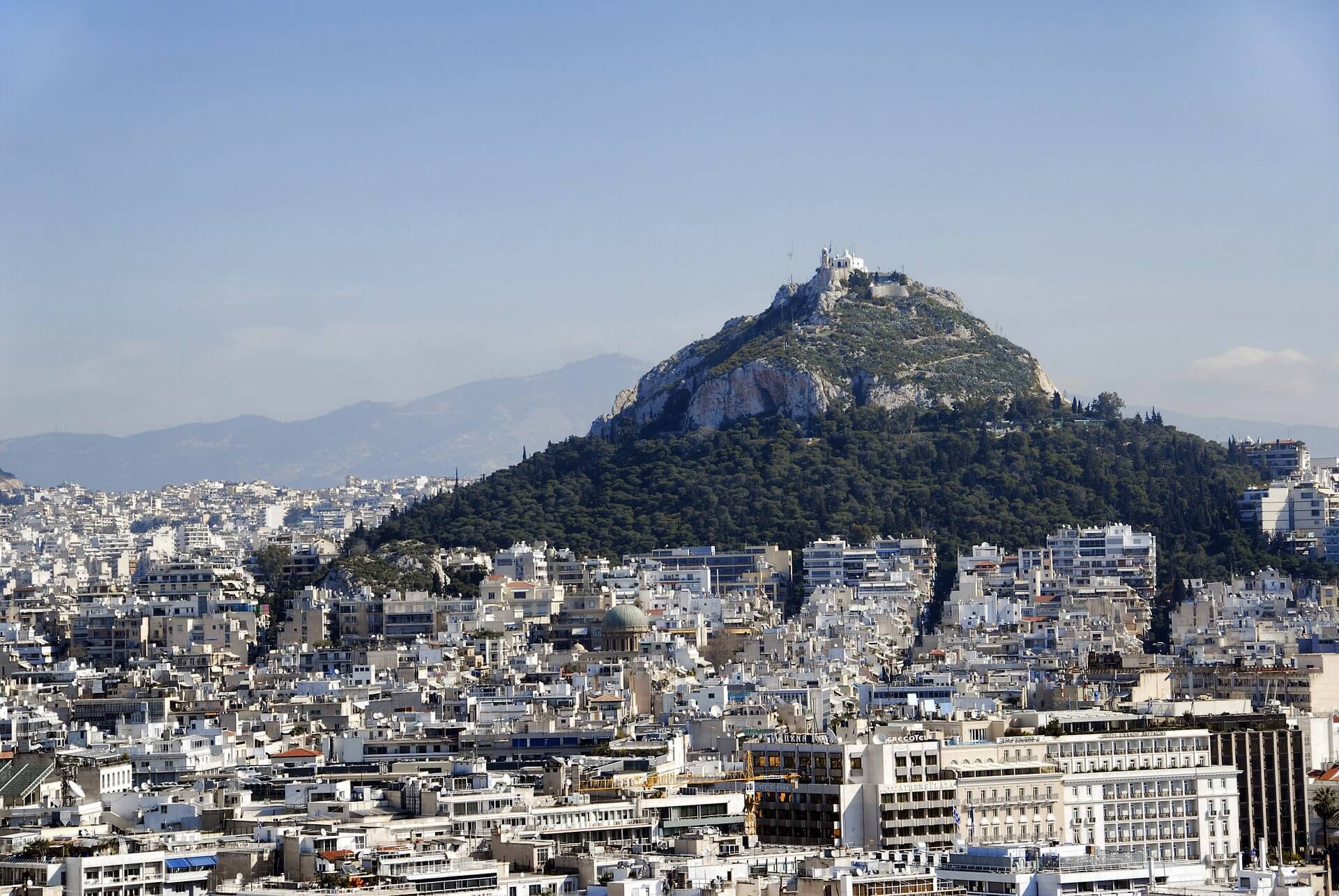 Riding the cable car up to Mount Lycabettus is an essential activity to do in Athens with kids. According to legend, Mount Lycabettus was formed when the goddess Athena dropped a large rock she was carrying upon hearing some bad news. Rising 900 feet over Athens, the hill offers spectacular panoramic views of the city. Plus, kids will enjoy the funicular ride to the top. In addition to the Acropolis, Syntagma Square and the Panathenaic Stadium, you can also see the port of Piraeus, the Aegean sea and the Peloponnese mountains. The best time to go is in the late afternoon so you can catch the sunset. Take some photos, then explore the small Greek Orthodox Agios Georgios Chapel at the top of the hill. 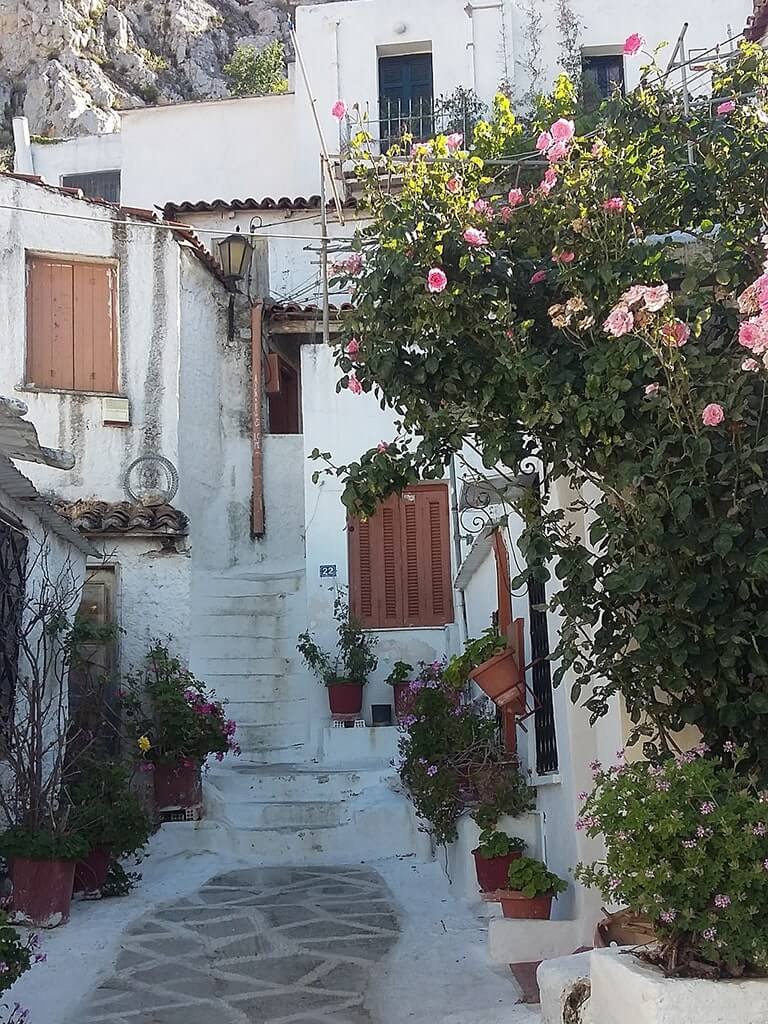 Plaka, the oldest residential neighborhood in Athens, is a great place for families to explore. The picturesque, centrally-located neighborhood is perfect for a stroll, as many of the roads are car-free. There are archaeological sites like the Tower of the Winds and the Door of the Medrese, as well as many restaurants, cafes, souvenir shops, and jewelry stores. For families with kids under the age of twelve, visit the Hellenic Children's Museum, which offers educational, interactive exhibits and spaces like the Bubble Room, the Room of Pythagoras, and a children-friendly market.” While less educational than some other museums in Athens, this can be a welcome reprieve for families with younger children that need space to engage in play.

Not many people are aware of the beautiful beaches just outside of Athens, but there are plenty. A beach day is the perfect way to spend a day in Athens with your family, especially after a few days of museum-hopping. One of the best is Astir Beach where you can enjoy the crystal-clear waters and sand at a private beach club, with clean and family-friendly amenities. There are other beaches, of course, with varying prices and amenities, but beware of crowding and underwhelming facilities at public beaches. Other options that will be comfortable for families with kids include Grand Beach Lagonissi, an afternoon at Balux Cafe in Glyfada for more private options, or Yabanaki Beach for a public beach option. 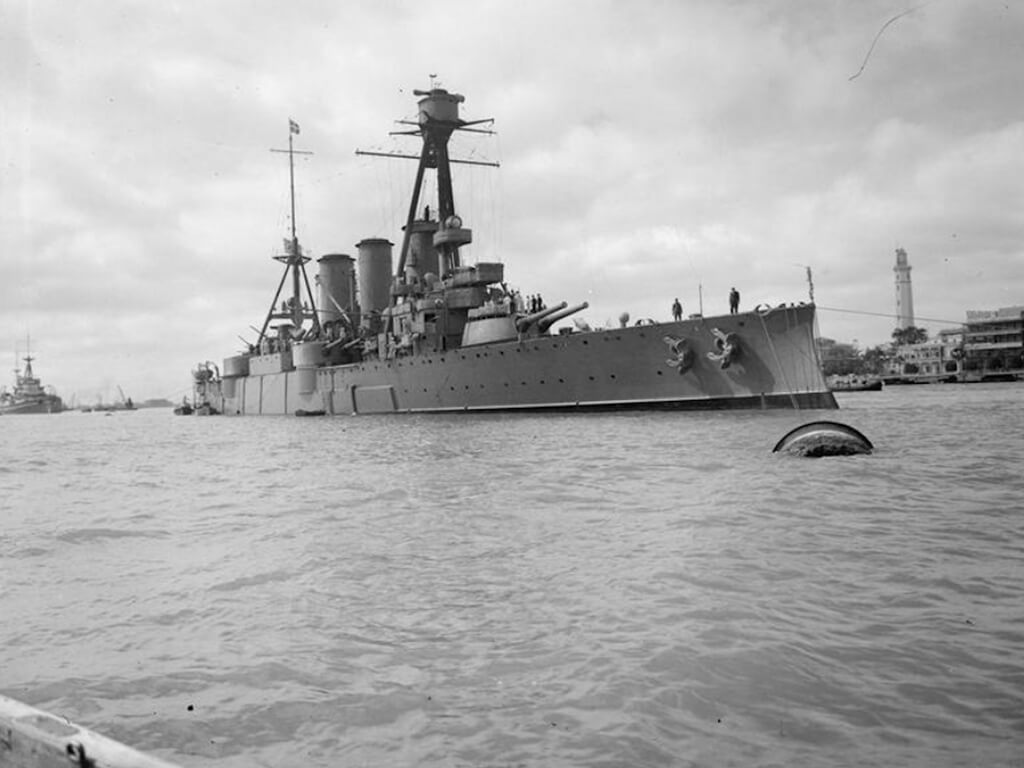 On the edge of Flisvos Marina, in an Athens suburb, the “George Averoff” battleship turned naval museum is a great place to visit in Athens with kids. Used in the Balkan Wars and WWII, it is now a monument to Greek naval history. Kids will enjoy exploring the impressive main deck, and the view into the sailors’ quarters, captain’s cabin, and kitchens. After exploring the museum, the Flisvos Marina offers plenty of family-friendly activity with its many parks, cafes, and a large pedestrian area.

The Eugenides Foundation is both recreational and educational. At the digital planetarium, children and families can learn about astronomy, space, science, and astrophysics through state-of-the-art technology. Visitors can watch digital projections of the solar system, as well as 40 min digital shows and film screenings on the planetarium’s massive hemispherical dome.  (Audio in English is available.) At the Science and Technology Center, visitors can brush up on their science knowledge and participate in interactive exhibits in physics, chemistry, mathematics, robotics, and biology.

The Stavros Niarchos Foundation Cultural Center, home to the National Library of Greece and the Greek National Opera, makes for an interesting afternoon in Athens with kids. The surrounding park (the largest green space in Athens) hosts concerts, festivals, photography exhibitions, and film screenings. Children and families can sail, kayak, or bike along the canal during the summer and go ice skating in the winter months. The park has many playgrounds, gardens, and open areas for picnicking. 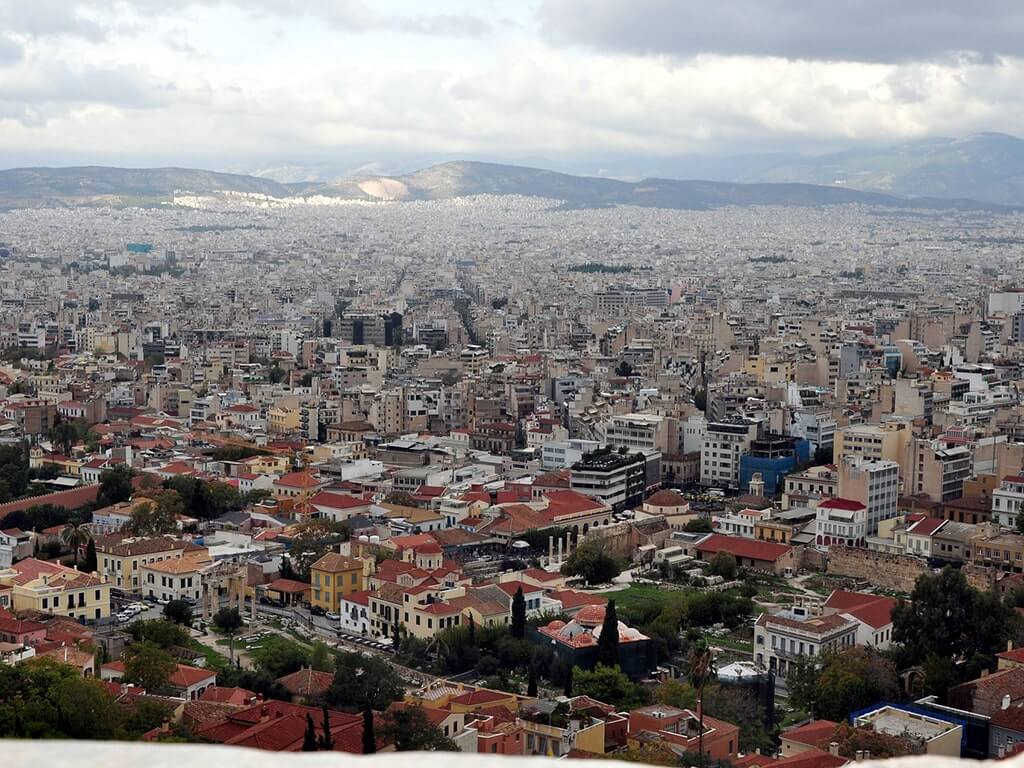 Athens can be a fantastic getaway for families with kids of all ages. Many of the sites and museums offer plenty to entertain both children and adults, and the pleasant parks and seaside are a perfect place for families to relax after a few days of sightseeing. See the more popular sites, including the Acropolis and Agora, and the National Archaeology Museum on interactive, kid-oriented Context tours. To view all of Context’s private and small group options, visit our Athens city page.

Want to learn with a true expert? Get a comprehensive view with one of Context's private or small group tours in Athens, or learn more about Greece with our interactive, live-taught seminars from the comfort of your own home.

Put Athens In Context with our other blog posts: