With Greece opening its borders in May 2021, we're excited to be operating private tours in Athens and the Greek Islands (specifically Crete, Greece). If you're looking for inspiration before your next trip, we've got online seminars to help you familiarize yourself with Greece. Context Learning presents live-taught seminars on the history, culture, and food of Greece — presented by compelling scholars all over the globe.

Athens is not your average capital. It’s also one of Europe’s most historical cities and the birthplace of Western civilization. From visiting ancient sites like the Acropolis to learning about the great Greek philosophers to enjoying the best of Mediterranean cuisine, there is no shortage of things to do in Athens.

If you’d like to take a break from the capital, however, we encourage you to make an excursion to the ancient temples, archaeological ruins, beautiful islands, and scenic countryside outside the city. Here are our recommendations for the best day trips from Athens. 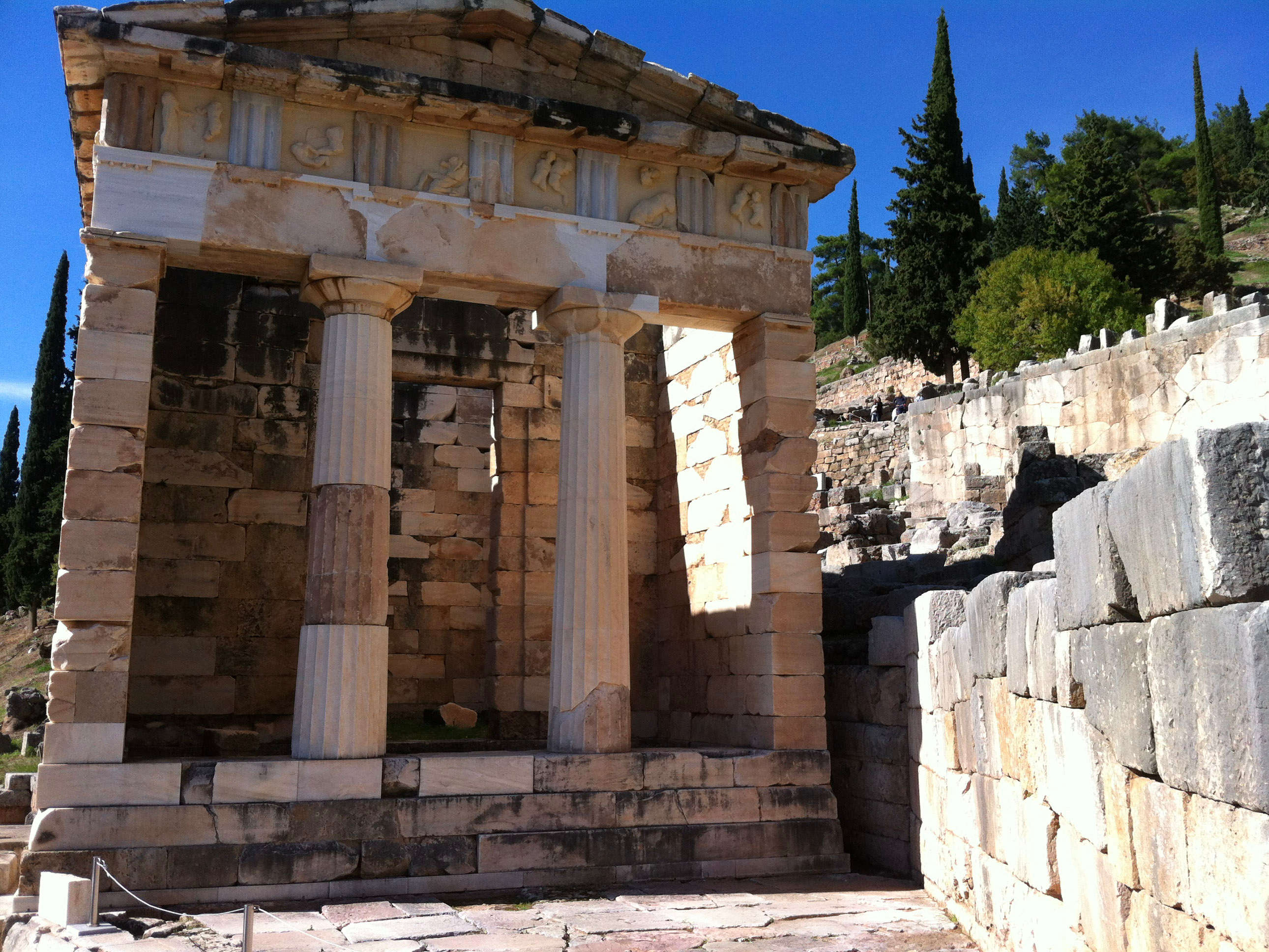 Delphi, nicknamed “the navel of the world,” is one of the best day trips from Athens. Located on Mount Parnassus, the city was the cultural and religious center of ancient Greece, home to the Temple of Apollo, an important worship site and sanctuary of the Oracle at Delphi. Explore the ruins of the ancient temple, then head up to visit the impressive 2,000-person amphitheater and the Delphi Stadium, where the Pythian games were held every four years in honor of Apollo. At the Delphi Archeological Museum, learn about the history of ancient Greece and admire beautiful artifacts like the Sphinx of Naxos and The Charioteer. Make time to visit the temples and treasuries at the Sanctuary of Athena Pronaia. To learn about the historical significance of Delphi from an archaeology expert, join our Delphi Excursion.

How to get there: Take the bus from Athens terminal station to Delphi. The one hundred and ten mile ride takes around two and a half hours.

Located in the Saronic Gulf, the small island of Aegina is a popular getaway from Athens. Explore the island’s ancient ruins, soak up some sun on the island’s sandy beaches, enjoy delicious Greek food at one of the many ouzeries (traditional Greek taverns) or seafood restaurants, try the world-famous Aegina pistachios, and walk through the picturesque Aegina town and the tranquil fishing village of Perdika. Be sure to visit the well-preserved Doric-style Temple of Aphaia, built around 500 B.C. on a wooded hill overlooking the bay and coastline. Aegina is also home to the imposing Agios Nektarios church, a popular pilgrimage site for Orthodox Christians.

How to get there: Take the metro from Athens to Piraeus harbor, twenty five minutes away. From there, take the ferry or hydrofoil to Agia Marina port or Aegina Town, sixteen miles from the capital. The ride is about forty minutes. 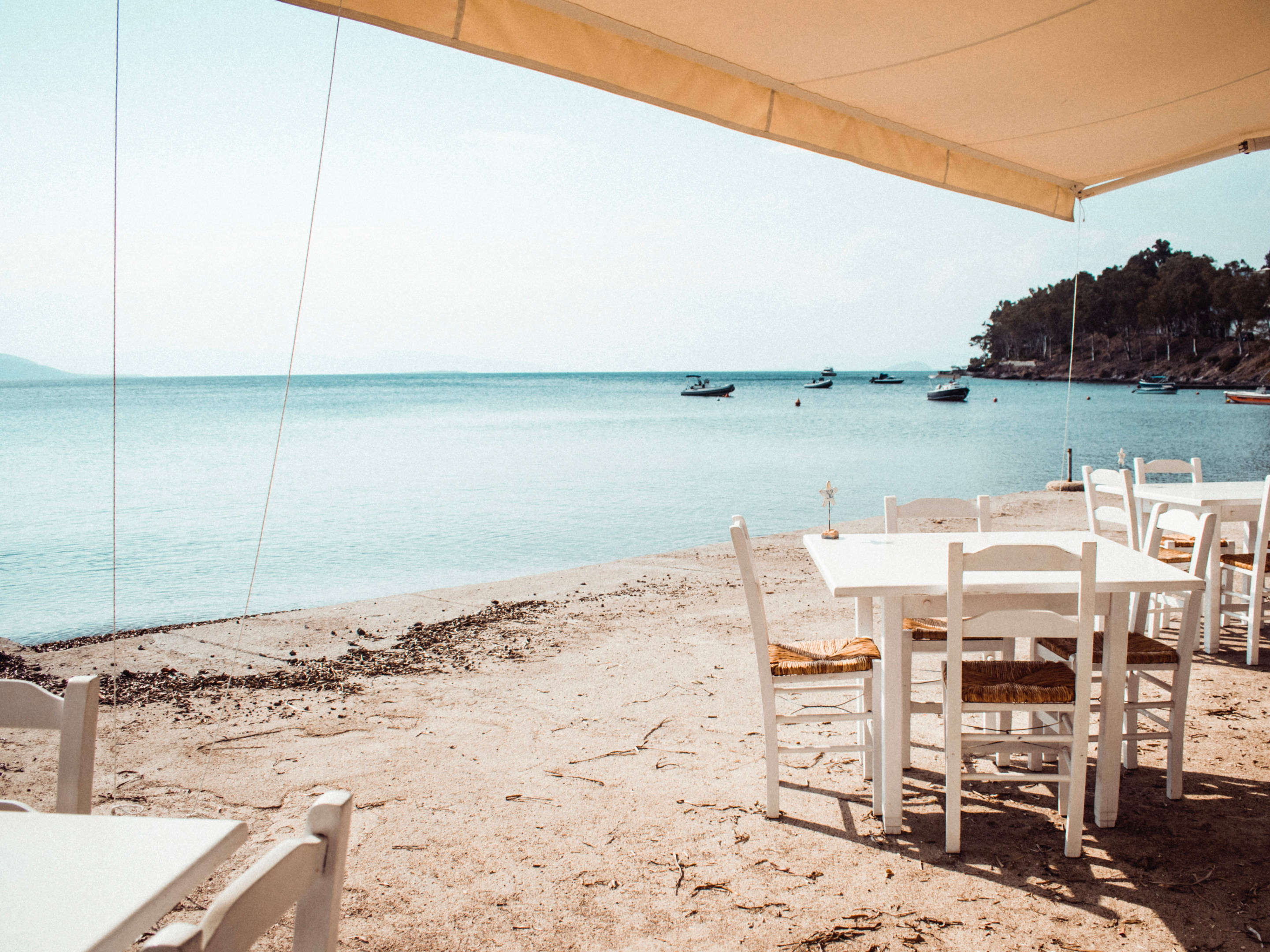 Cape Sounion is one of the most popular day trips to make from Athens. It is home to the iconic Temple of Poseidon, which pays homage to the ancient Greek God of the Sea. The majestic temple, made of white marble, has been a famous pilgrimage site for writers and philosophers. According to legend, King Aegeus leapt to his death from Cape Sounion, and the Aegean Sea is named after him. We recommend taking this trip in the afternoon, as catching the sunset and seeing the spectacular views of the sea from Cape Sounion is one of the most special things to do near Athens. To really get an understanding of this stunning and historic locale, you can also join our excursion to Sounion led by a Context expert.

How to get there: Rent a car or take the KTEL intercity coach bus from Pedion Areos terminal station. Cape Sounion is about forty five miles south-east of Athens, and the ride takes an hour and a half. 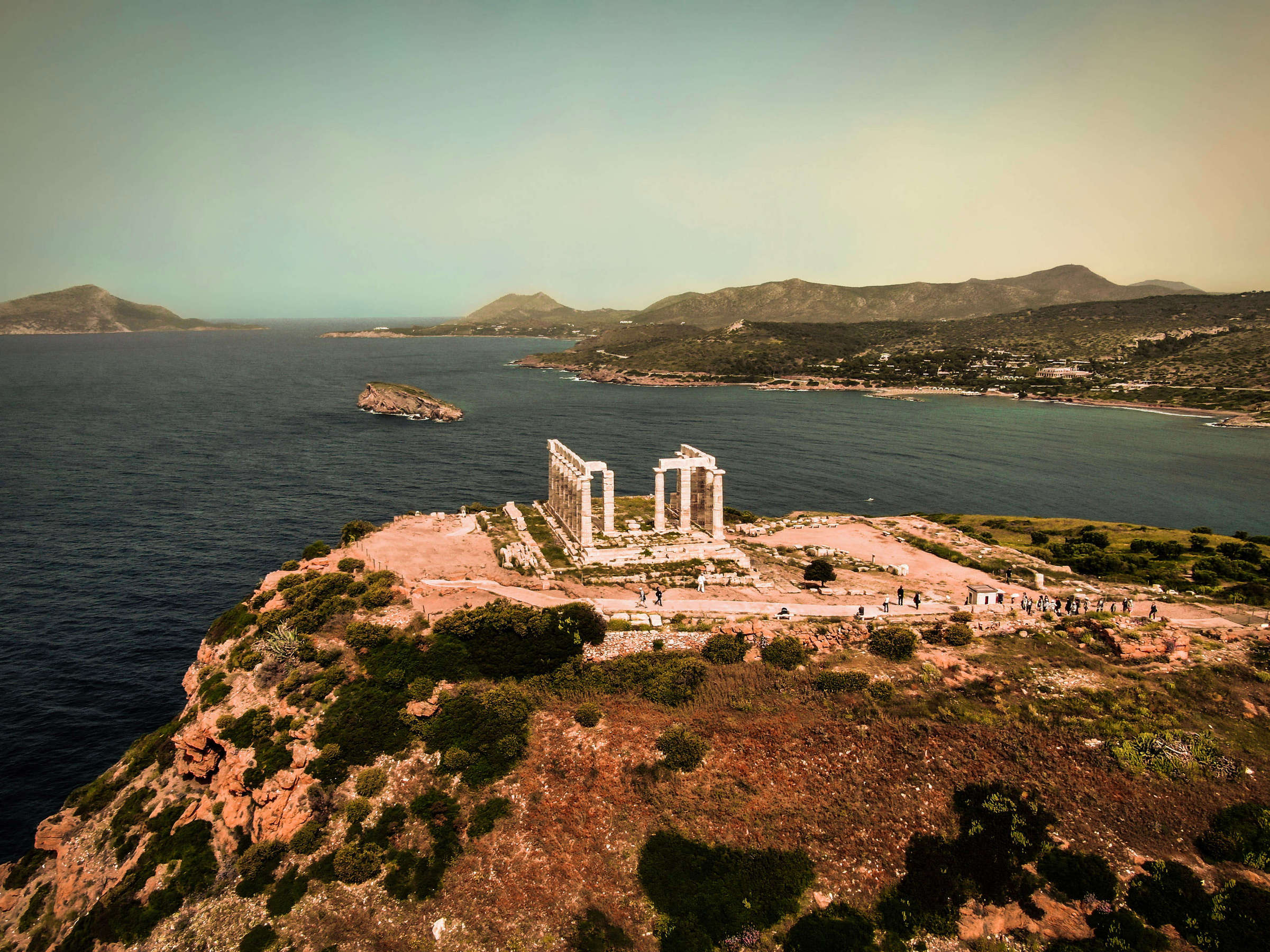 Photographers, rock climbers, and hiking enthusiasts will particularly enjoy Meteora, famous for its extraordinary, awe-inspiring landscape. The Byzantine monasteries perched atop gigantic rock formations are breathtaking architectural marvels that are among the most visited sites in the country. Of the original twenty-four medieval monasteries, six remain in good condition. The most popular are Great Meteoron Monastery, which has a church, a museum and a sacristy filled with human skulls of former residents, and Holy Trinity Monastery, which was featured in the James Bond film “For Your Eyes Only.” After visiting the monasteries, enjoy some batzina, a traditional savory pie, in the town of Kalampaka, and explore the scenic village of Kastraki.

How to get there: Rent a car or take an early train from Athens railway station to Kalampaka train station. The two hundred and twenty five mile ride takes around four to five hours.

Corinth, one of the major city-states in Greek antiquity, makes for a fascinating day trip from Athens for history lovers. Corinth is made up of the main city area and the Acrocorinth fortress on the hill, offering spectacular views. With two ports, Lechaion and Kenchreai, Corinth was an important and wealthy commercial hub. In Ancient Corinth, explore the remains of the Doric Temple of Apollo, the Peirene fountain and courtyard, and the Archaeological Museum of Ancient Corinth, where you can see artifacts like the famous twin Kouroi statues and a collection of Corinthian pottery. Ancient Corinth is also a popular Christian pilgrimage site, as it was a location where Saint Paul lived and preached the Gospel, according to the Bible. Visit the nearby Corinth Canal, which connects the mainland to the Pelopennese and is a popular bungee-jumping site.

How to get there: Rent a car or take the bus from Kifissos Bus Terminal in Athens to Corinth. The ride is about one hour. You can also take the Suburban railway from Plakentias Station to Corinth, which will take one hour and fifteen minutes. From Corinth, take the bus or a taxi to the archaeological site of Ancient Corinth.

The wine region of Nemea makes for a relaxing day trip from Athens. Nemea is the country’s largest wine-producing area, and is famous for its production of excellent red and rosé wines made from the Agioritiko grape. Wine lovers will enjoy visiting Nemea’s wineries, which offer tours and wine-tasting sessions. For non-oenophiles, there are also archaeological sites, including the remains of the temple of Nemeios Zeus, the ancient stadium where the Nemean athletic games were held in the sixth century B.C., and the Archaeological Museum of Nemea.

How to get there: We recommend renting a car so you can explore the wine roads of Nemea. You can also take the KTEL bus from Kifissou station in Athens to Archaea Nemea, the archaeological site. The seventy three mile ride takes around one and a half hours.

Nafplio, situated on the Argolis peninsula, makes for a romantic day trip from Athens. The picturesque seaside town was the first capital of Greece. Spend the day exploring its narrow streets, Venetian and neoclassical architecture, and the fortresses off the coast including the fifteenth century Bourtzi castle and the eighteenth century Palamidhi fortress. One of the best things to do in Nafplio is the scenic walk around the ramparts of the Akronafplia Castle, the city’s oldest castle, from which you can view the incredible vistas of the Old Town and the northern bay of the Argolic Gulf.

How to get there: Rent a car or take the KTEL bus from Kifissos station. The eighty six mile ride takes two hours. 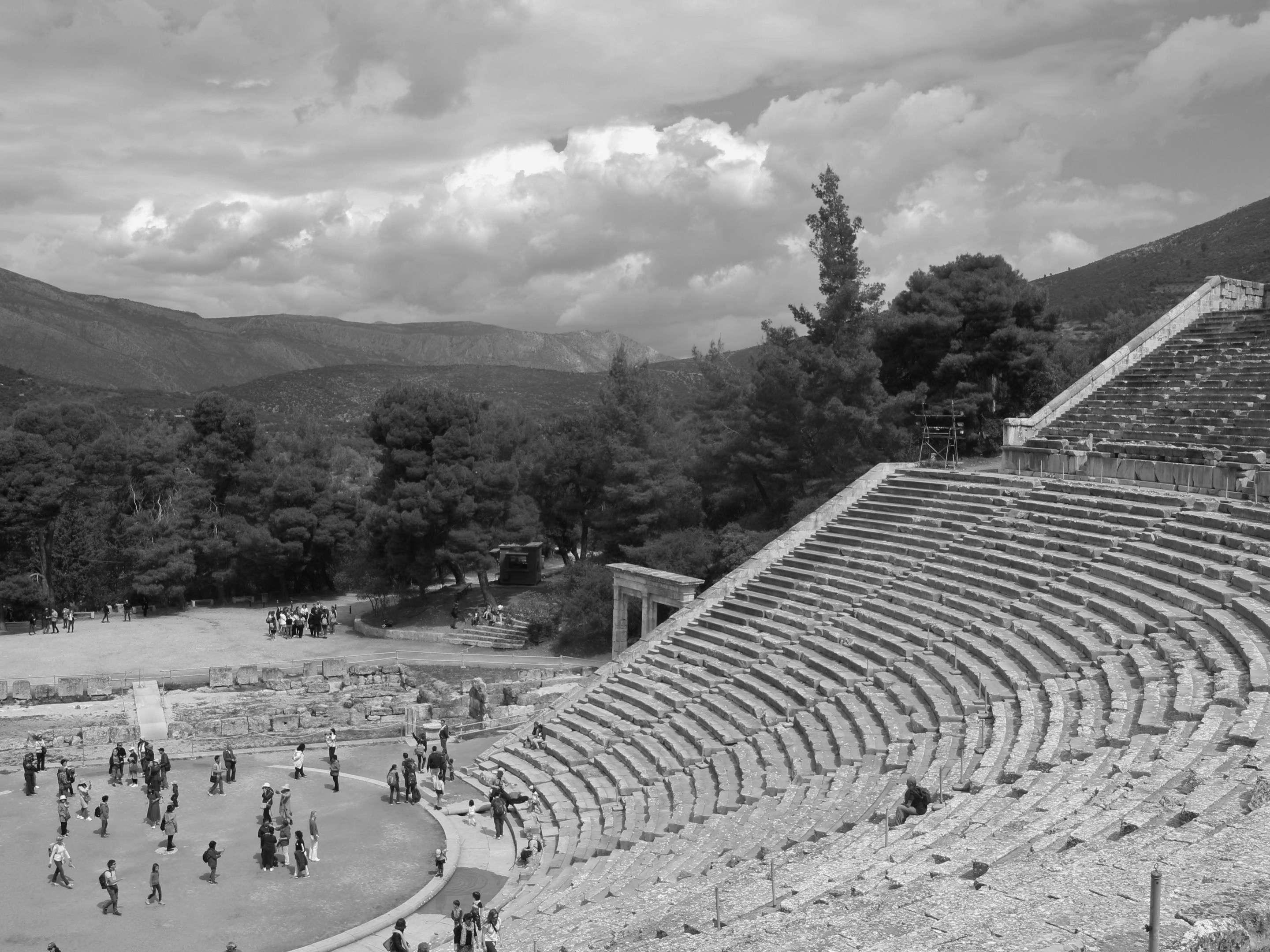 Epidaurus is best known for the spectacular 14,000-seat amphitheater built in the 4th century B.C. From the top seats of the amphitheater, which has amazing acoustics and still hosts productions today, you have magnificent views of the surrounding area. Epidaurus is also home to a fifth-century stadium, where sporting events were held, and one of the most important healing sites in Ancient Greece, the Temple of Asklepios, established in honor of the son of Apollo and the Greek god of health. The Archaeological Museum of Epidaurus displays ancient relics and statues found in the area.

How to get there: Take the bus from Kifissos Bus Terminal in Athens to the village of Epidaurus. The seventy five mile ride takes around two hours. You can take a bus to the archaeological site. 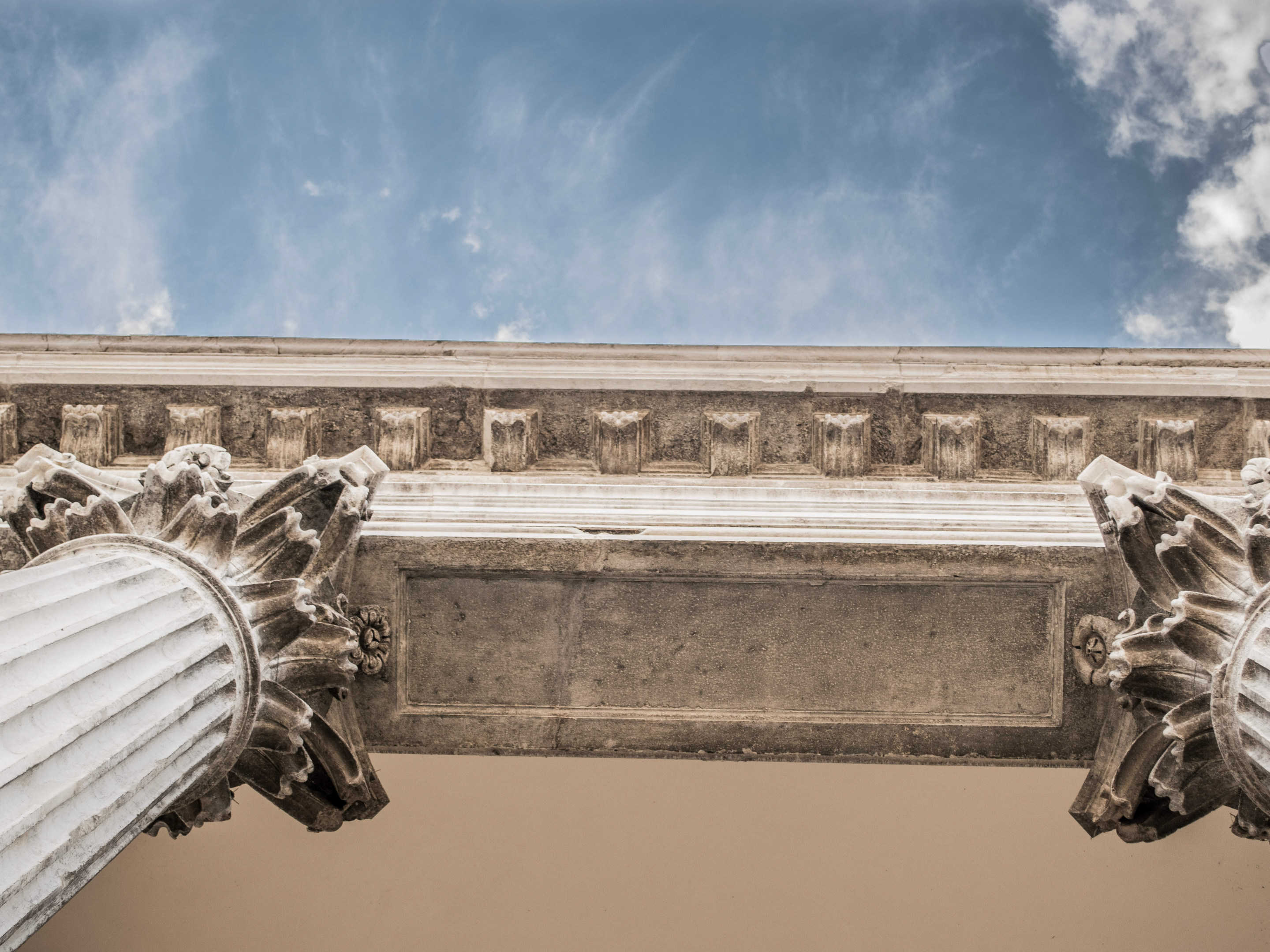 Athens is truly a marvel, having been continually inhabited for nearly 3,000 years. That incredible history is not limited to just the city. The surrounding area is full of magnificent archaeological and historical sites. If you find yourself with some extra time in the Greek capital, we encourage you to take a day trip to one of these sites, and soak in more wonders of the ancient world.

And for the time you spend in Athens, there are several private and small group tours available to help you dig under the surface of this unparalleled region.

Want to learn with a true expert? Get a comprehensive view with one of Context's private or small group tours in Athens, or learn more about Greece with our interactive, live-taught seminars from the comfort of your own home.
Put Athens In Context with our other blog posts:
Company
Programs
Resources
Newsletter